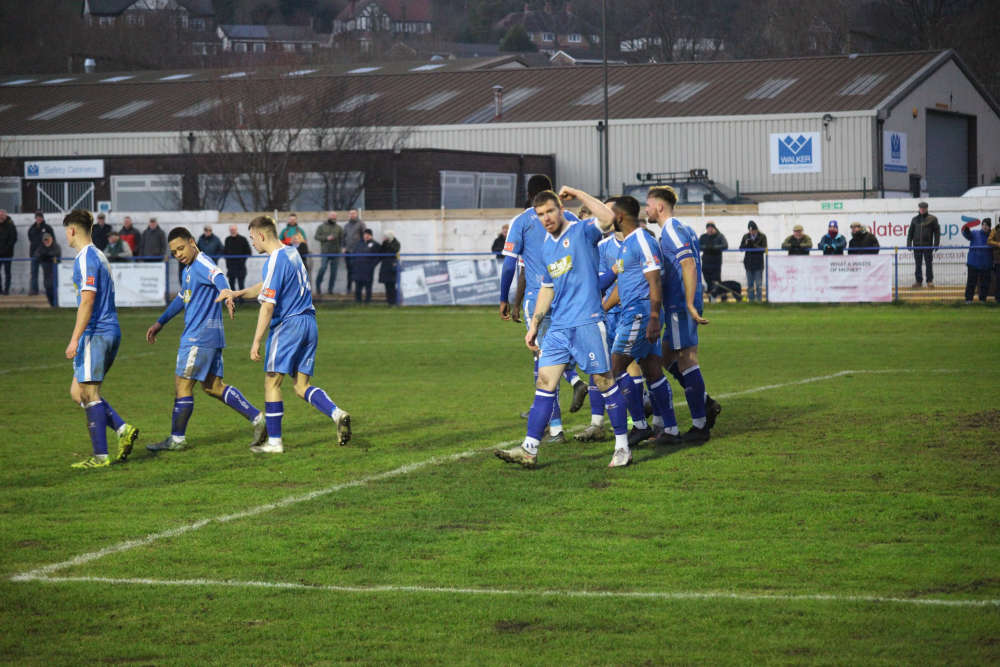 The Hillmen entered the game having suffered a 5-1 defeat at Workington seven days earlier, however there appeared to be no sign of a hangover as Glossop ran riot and took a 3-0 lead by the 71st minute, thanks to a Jamie Rainford brace and Keaton Mulvey.

With 20 minutes remaining the Hillmen were cruising and destined for victory, however they survived a lane scare in the dying stages when Colne hit back with two of their own. Glossop’s Ekow Coker was sent off in the 87th minute after blocking a goal bound shot on the line with his arm. The referee was left with no choice but to award the penalty, and Reece Webb-Foster stepped up and duly converted.

And the striker found himself on the scoresheet in the 90th minute with a quick fire double, although it mattered little in the end as Glossop survived the nervy ending and held out for the three points.

Whilst he was delighted with the result at the Amdec Forklift Stadium - especially following the previous weekend’s drubbing - Mellish will now have to contend with a number of key players who are sidelined for various reasons.

However, the former Warrington Town boss is currently on the hunt for new players and teased that there may well be a few new faces joining the club in the coming days. He added:  “I’m absolutely delighted with the win and I think the lads showed great character, especially after the disappointment of last weekend’s defeat at Workington. It was great to bounce back and get three points; a massive plus for us, so I was well pleased.

“I had a busy week leading up to the Colne game with Luke Nock going back to Stockport County and then the unexpected call-back from Macclesfield for Sidi Sanogo-Fofana. I also had to deal with Sam Barratt’s suspension and Rory Fallon out through injury.

“We went into Saturday’s game with only 14 available players, so it’s going to cause a problem this week. I’ve been on the phone to a couple of Football League managers to see if we can get players on loan, and hopefully that will come to fruition with a bit of luck. On top of that I’m 99.9 per cent certain that there will be two permanent signings that we can announce midweek. It could be a busy week, with the potential of three or four new faces joining.”

Aside from the Workington defeat, Glossop have enjoyed a great run of form with one defeat in 11 games.

Mellish will now be hoping his side can stage another promising run of form - continuing this weekend with the visit of Market Drayton Town, who are rooted to the foot of the table having failed to win single game on their journeys this season. Mellish said: “There were loads of positives to take from the game, with Rainford getting back on the scoresheet, which is what he’s here to do and I’m delighted for him. Keaton getting a goal, which was well deserved and I need more goals from him, which he’s aware of. He’s a great kid with a great work effort, and he’s a massive plus for the team.”