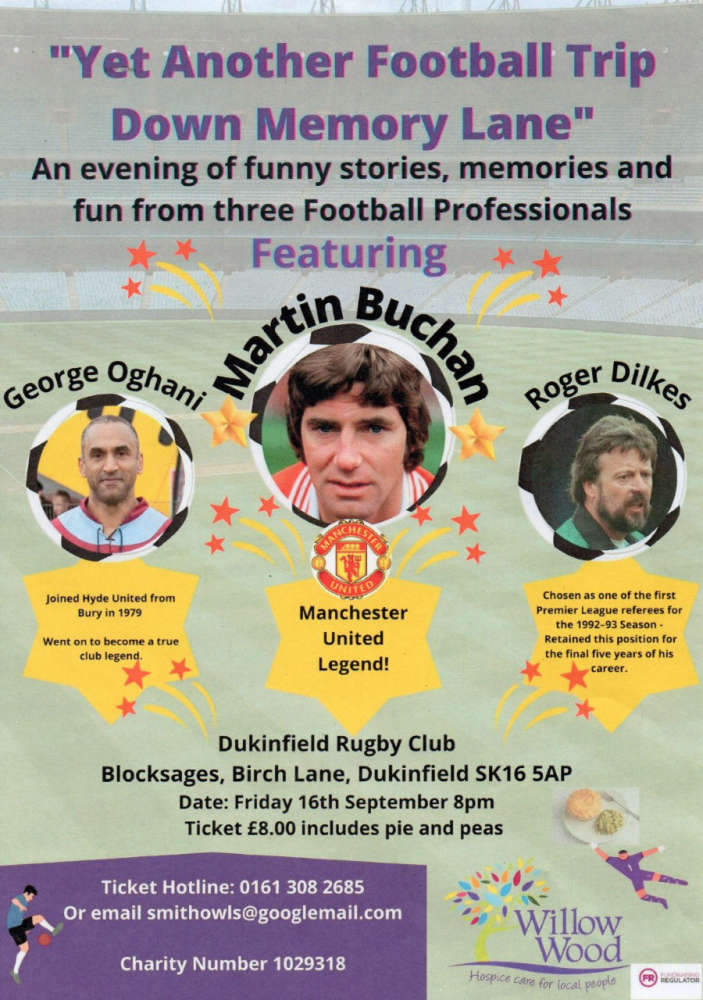 Tickets, at £8.00 (including pie & peas supper) are available from organisers Brian Wild and Chris Smith by phoning 0161 308 2685 or emailing smithowls@gmail.com

He added: "Willow Wood Hospice needs urgent help to continue to develop high quality care for the people of Tameside and Glossop".

For those unaware of the special guests' background, here are some details:

Manchester United legend and classy central defender who captained United to their 1977 FA Cup win over Liverpool. Signed from Aberdeen in 1972 for £125,000 and still considered one of United's best-ever signings. Played for Scotland in the 1974 World Cup in Germany and the 1978 World Cup in Argentina. Finished his career at Oldham Athletic. An all-time favourite at Old Trafford.

Arguably the greatest player ever to pull on a Hyde United shirt, George remains a firm favourite with the fans 40 years later. Starred in the Tigers team that won the Cheshire League treble in 1981-2. Signed for Bolton Wanderers in 1983 and played for several other Football League clubs and remains a club legend at Burnley FC.

Man, who made it from Mill Lane, Hyde, to the Merseyside derby via Mossley. When Roger’s hopes of being a professional footballer with Huddersfield were dashed, he took up the whistle. Officiated in the Premier League and old first division. One of the most respected referees of recent times.