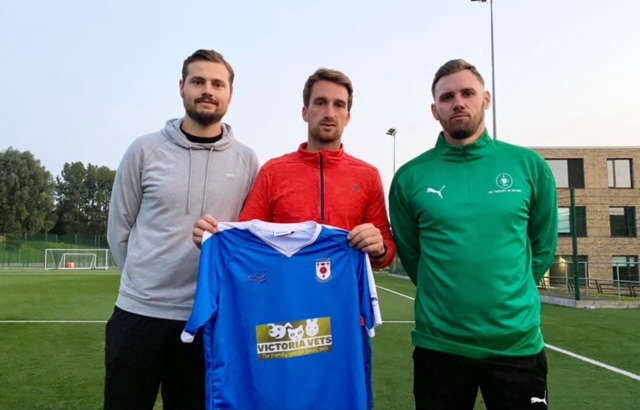 It's almost the start of the new season for Glossop North End Community Club and there's a new management team in place for the Under-21s.

Glossop North End AFC's new signing Rory Fallon will be joined by Dan Tweedie and James Dawson for the 2021/22 season, which will kick off for the team on 5 September at The Amdec Forklift Stadium.

The club say the trio will 'provide an exciting blend of experience, local knowledge and management experience in the Northwest Under 21 Development League' and 'help secure a pathway for local talent to thrive and find first-team football at the club'.

Rory has already been amongst the goals for the Hillmen in the early weeks of the campaign. He's played at Manchester City and Aston Villa, as well as representing England Schoolboys, ISFA and GB Universities, in his youth before his football scholarship at Loughborough University and non-league experience at clubs including FC United, Trafford, Mossley, Hyde United and Curzon Ashton.

He has also coached Egerton Under-21s in this league.

Rory commented: "I am really excited to get started with the players and help the next generation on their footballing journey. I am looking to try and develop the players and hopefully see some of them make the transition to first-team football."

We spoke to Rory Fallon after his appointment as part of the new Hillmen U21 management team
🔵⚽️🔵@glossopjuniors @northwestu21 pic.twitter.com/P2H8NMJ6Zk

Meanwhile, Dan played for Glossop as a youngster through to a successful reserves team before turning out for Cheadle Town and New Mills.

Injury has meant he now wants to focus on coaching, where he already runs a local coaching company, On Target in Sport, and has managed in youth football.

"I am looking forward to another challenge with a great group of local footballers, looking to provide a strong link with the first team," he said.

James played for Wythenshawe Town for 10 years and eventually went on to manage the reserves and coach the development team.

He said he's delighted to be joining Glossop North End, adding: "I’ve been impressed with everything so far and I am excited by the challenge of progressing players in a great league with great clubs".

All the coaches are accredited with the Football Association (FA) and working towards different coaching levels which the club say they will be supporting them with.

Ben Mills, Football Development Officer at Glossop North End Community Club, said: "Whilst we would have liked to make these appointments earlier in the pre-season, we are really pleased we have the right coaching team in place for the season ahead.

"Thanks to everyone who applied for the roles, there were some strong candidates. However, we believe we have the blend of playing experience, coaching at this level and enthusiasm for the roles which will help all the players develop and hopefully provide a pathway for our many talented players of 16+ we have, and a great platform to play at a really good level.

"With the Under-21s kicking off next weekend and the Under-18s playing in their first FA Youth Cup game in 10+ years, we cannot wait to get started!”

Dan Bates, Glossop North End Club Secretary, added: “We are delighted to see Rory, Dan and James in place for the season ahead. Glossop North End AFC is part of the community and the support from the town has always been amazing.

"Helping cement a pathway for the talented juniors coming through and being able to support games at The Amdec Forklift Stadium for both the 21s and 18s is just great for everyone involved".