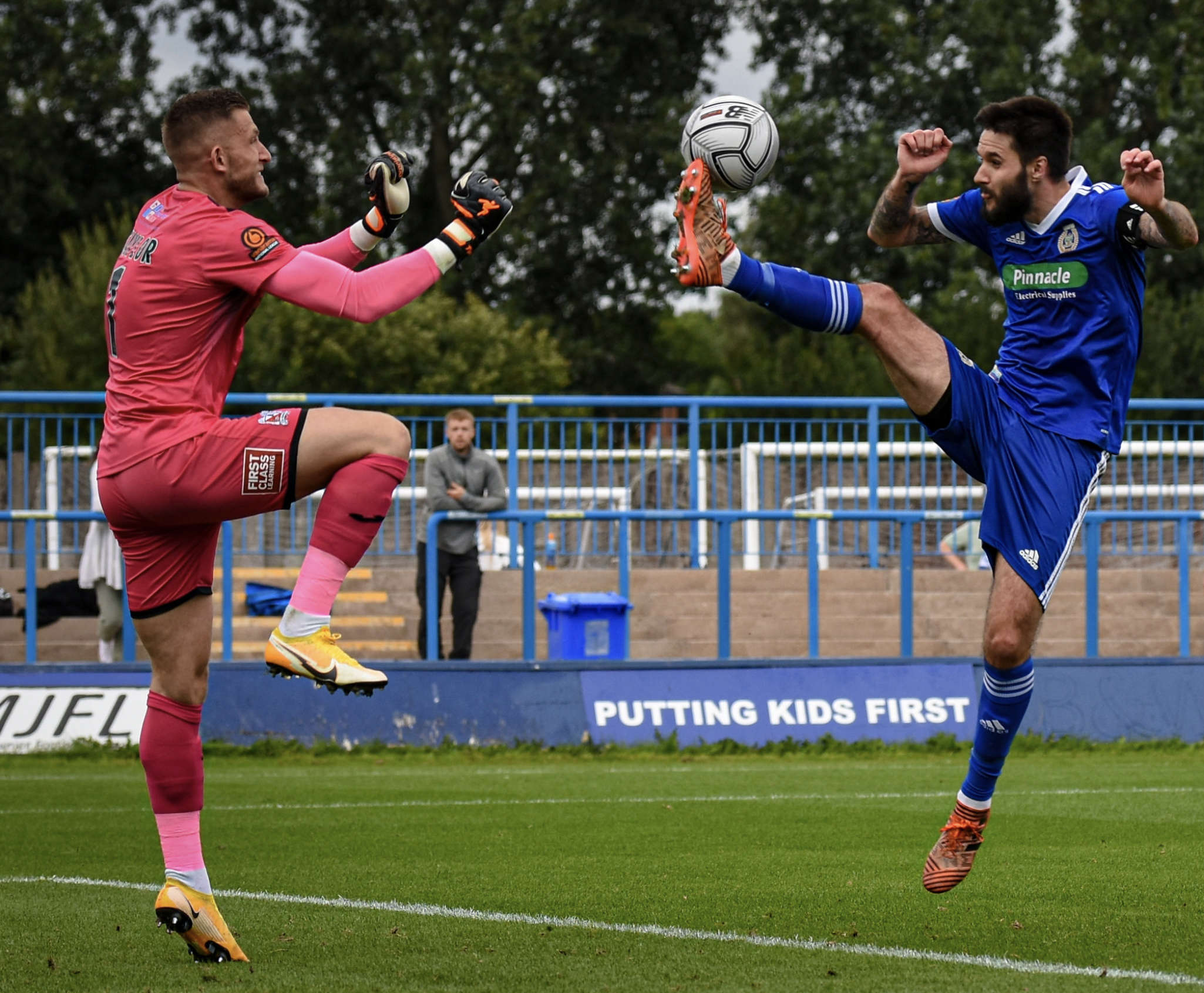 A Dom Knowles double helped Curzon Ashton to a massive three points against Darlington at the Tameside Stadium.

The Nash entered the game having suffered a late defeat at Boston United on Saturday, and it looked as if Steve Cunningham’s side were still suffering the hangover effects of that result after going behind in the 20th minute when Jake Cassidy pounced from close range to give the Quakers the lead.

Had it not been for an excellent save from goalkeeper Chris Renshaw, the visitors would have doubled their lead shorlty after, but as it transpired the Nash levelled matters in the 29th minute when Knowlescapitalised on weak defending, turning two players and firing home.

And the striker popped up with his second just ten minutes later, as the Darlington defence were unable to clear the ball of danger and Knowles took advantage before lifting the ball over the onrushing Tommy Taylor.

Curzon were dealt a blow with just under half an hour to play when Dale Whitham was red carded for a challenge close to the corner flag.

However, depsite the one man advantage, Darlington were unable to breakdown the resolute Curzon defence and the hosts withstood the pressure to claim the three points.

Following the result, Cunningham spoke to Curzon’s media team and hailed his side’s display. “I think we should have been out of sight in the game, and I don’t mean to be disrespectful to Darlington because they’re a good team but I never felt threatened by them today, and I really thought that when we were going on the attack we would score. I wanted to try and deliver a performance in front of our home fans today, and I think they did that both in terms of playing collectively with the opportunities we created. That sheer grit and desire, you just can’t coach that.”

Commenting on the impact of the fans at the Tameside Stadium, Cunningham said: “They’re not the 12th man, but they are an energy boost and when we needed to dig deep they were still supporting us under pressure. We couldn’t get out for the last ten minutes, we were down to ten men and they got us over the  line. On behalf of the dressing room I want to thank them.”

Curzon return to action this weekend with a trip to Leamington.

The Brakes are currently 14th in the table having won one and lost one of their opening two games.

Off the pitch, Tameside Council have teamed up with the Tameside Armed Services Community (TASC) and the Curzon Ashton Community Foundation to set up a horticultural therapy project for veterans.

Using funding received from the Armed Forces Covenant Fund Trust’s Tackling Loneliness programme, a hub-and-spoke plan was established based on the Defence Gardens Scheme, which works on the basis of combining people, place and purpose.

Tameside’s hub is based at DB Nurseries, off Dukinfield Road, in Hyde. The spoke is at the TASC veterans’ allotment at Rose Hill in Denton.

Veterans can now sign up for a 10-week programme, consisting of one three-hour session a week, which is designed to help those who attend build stronger social networks and friendships and become emotionally stronger.