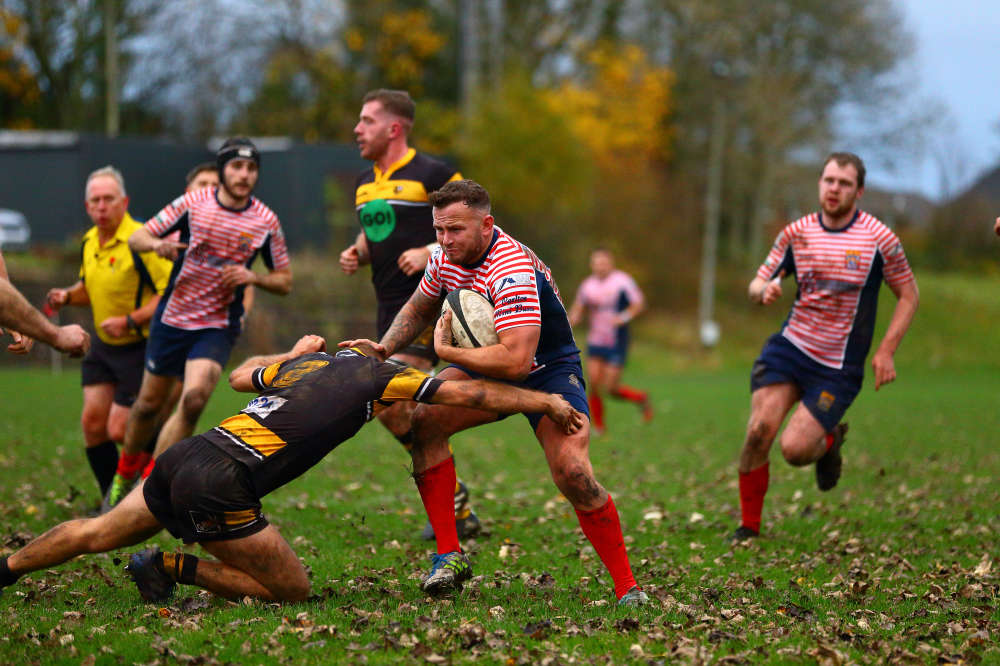 The fixture between these two clubs has always been a tasty encounter with honours even over the last few years. Didsbury went into this game having played eight and won eight, Oldham were on four wins from their eight outings. It was going to be hard but having home advantage Oldham were hopeful of getting something out of the game.

Didsbury kicked off on an overcast but otherwise great day for rugby. Oldham started badly, giving away too many penalties but good defensive work from Jordan McEwan and Adam Walker kept the away side out. However on 13 minutes Oldham gave away a very kickable penalty and again on 16 minutes to go 0-6 down. It was obvious that Didsbury were well organised and well drilled, they were backing up and keeping the ball alive and available for their runners and on 20 minutes went over for their first try. Both sides were allowing mistakes to creep into their game but the Didsbury number 12, Tom Andrews, made no mistake with yet another easily kickable penalty from in front of the posts. More or less from the restart Didsbury worked the ball back to just outside of the Oldham 20 metre area. From a lineout there were three phases of rugby and Didsbury went over for their second try, then right on halftime they added a third, both were converted to leave a halftime score of Oldham 0-28 Didsbury.

Oldham started the second period with a clear sense of purpose, establishing themselves in the Didsbury half with only a good relieving break by the impressive Didsbury eight Harry Rigby easing the pressure. The game settled into a bit of an arm wrestle but the finely balanced second half was disturbed when Rob Froggatt was given 10 minutes in the bin for diving over the top in the ruck. Didsbury used the advantage well, putting the ball through hands to score another converted try. The Oldham coach made the changes with Rhys Jones, Jack Sayle and Phil Conroy replacing John Souter, Dean McEwan and Alex Jobson respectively. Oldham’s scrum and lineout had been pretty good all afternoon and the replacements in the front row kept up the good work. Oldham had a penalty that Rhys Jones kicked deep into the Didsbury 20 metre area. From the lineout the forwards set up a rolling maul that drove all the way up to and over the try line with Jones claiming the try. Jones converted his try to make the score 7-35. With ten minutes left Oldham had a penalty virtually on the Didsbury 5 metre line, opting for the scrum the Oldham pack drove towards the line, the Didsbury defence were constantly infringing and the referee had no option other than to award a penalty try. Didsbury managed to add an unconverted try just before the final whistle. Final score Oldham 14-40 Didsbury.

The game wasn’t as one sided as the score line might suggest. Obviously Oldham have some work to do but their set pieces are strong and there is a great spirit in the camp. Oldham’s player of the game was Greg Higgins, he didn’t take a backward step all afternoon in attack or defence.