Curzon edged out by playoff-chasing Gateshead 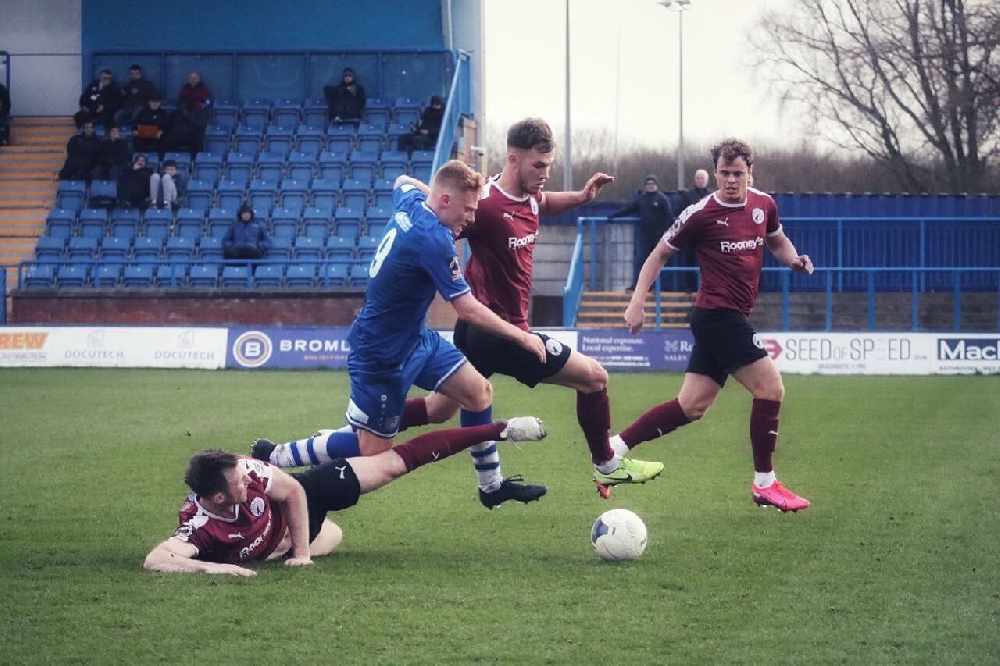 In an even start to the contest, Curzon looked the more comfortable of the two, having a lot of the ball. Although controlling the game, the home side found it fairly difficult to break through a very physical Gateshead back line.

The first chance came for Curzon on the 15-minute mark when Josh Askew hit an excellent first-time ball onto the head of Mike Calveley, but his effort drifted wide. This opening chance seemed to break the ice in what had been a slow start for both sides, and the first half became much more open.

As Curzon became more confident in the game, a break came when Owen Watkinson burst down the right-hand side. As he broke free, he fell to the ground in the area following what looked like a certain illegal challenge from Jake Cooper. When the referee’s whistle went it seemed to be a certain penalty, however Watkinson was deemed to have gone down too easily and was booked for diving.

After 25 minutes, Gateshead grew in confidence. A burst of pace from Barrow earned his side a cheap corner against the run of play. A quick routine led to Mitch Curry finding himself free, but his shot was scuffed wide and Cam Mason had his first job of the afternoon in collecting the ball from behind his goal.

Curzon, though, continued to mostly frustrate the visitors and looked the more threatening side. Another came on the half-hour mark when Askew beat his man on the left and whipped a low ball into the area, only to be gathered by Gateshead keeper, Brad James.

In the aftermath, Curzon retrieved the ball through Askew and played George Broadbent through, however Gateshead’s full-back appeared to handle the ball in his own area whilst clearing. The result; another strong penalty claim not given.

As we approached the 40-minute mark, Watkinson continued to get the better of his man and cause trouble both through the right flank and through the centre. His dangerous cross almost found Broadbent, but again Gateshead were able to clear.

As the second half got underway, it was clear that Gateshead had stepped up a gear. Mo Ali found himself under pressure in the opening minutes, and the visitors created a couple of half chances from the right-hand side.

The first clear cut chance of the 2nd half came when Watkinson found himself in space around 20 yards from goal. He fired his effort on target, but the ‘keeper produced an acrobatic save to deny him.

As the hour mark approached, Gateshead began to dictate the game; controlling possession of the ball. On the 65th minute, a long ball almost caught Mo Ali out, but the Somalia international showed his quality and cleared up with ease.

Five minutes later and Gateshead broke the deadlock. Danny Shaw misjudged a high ball in the centre of the field, and the visitors were quick to pounce on the mistake. Jordan Preston picked up the loose ball and from 20 yards forced Cam Mason into a fantastic first save. Unfortunately for the Nash shot stopper, substitute Ruairi Keating lashed in the rebound.

A fantastic opportunity came for Curzon when George Broadbent cleverly found himself free on the left. His subsequent cross was inches away from finding the outstretched right foot of Andrew Halls. From the resulting corner, Calveley effort was heading for the back of the net until it was blocked on the goal line.

Just as Curzon were looking the more dangerous of the sides, a chance for the visitors came when Barrow excellently beat Askew and worked the ball into the path of Preston and his cheeky backheel attempt struck the post.

In the closing stages of the game both sides looked to have tired and the Nash – without the creative talents of Isaac Sinclair, Tunde Bayode and Connor Dimaio – couldn’t find an equaliser that their overall play would have deserved.

The result meant that Gateshead made it 8 games without defeat, while The Nash stay 19th, two places and six points above the relegation zone.