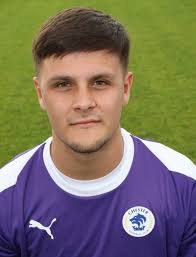 Goalkeeper Theo Roberts has returned to Mossley AFC for the rest of the season from National League North side Chester FC.

The 21-year-old stopper, who came through the youth ranks at Wigan Athletic, previously made eight appearances between the sticks for the Lilywhites this term.

The highlight was when he produced heroics in the penalty shoot-out against Abbey Hey on his debut in the Manchester Premier Cup at Seel Park back in October.

He spent last term at Buxton FC - where he impressed and performed a clean sweep in their end-of-season awards.

Roberts, who played for Wigan's first team in an EFL Trophy game against Accrington Stanley in November 2017, has also represented AFC Fylde and Atherton Collieries.

He has yet to appear in a competitive game for Chester, having joined in July 2018, but did feature briefly in pre-season during a friendly against former club Wigan.

We’re thrilled to welcome @ChesterFC Goalkeeper Theo Roberts back to Seel Park for the remainder of the season.

He previously made eight appearances between the sticks for the Lilywhites including his penalty heroics against Abbey Hey.