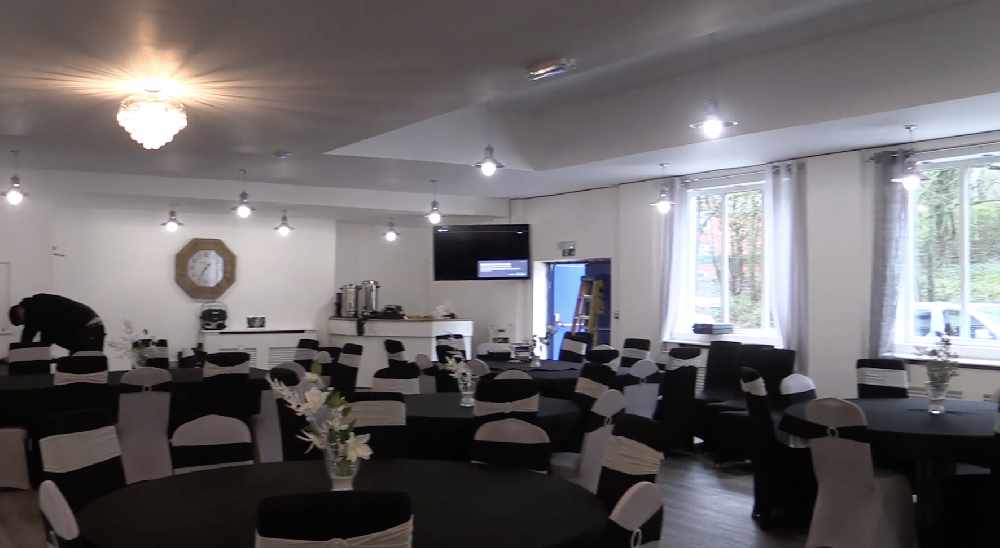 The Indian Restaurant has gone and in its place is the Bower Fold Events Centre where fans of both clubs can enjoy a drink and a bite to eat before, during and after the game.

It was opened just over a year ago when, according to Tameside press reports, business woman Wendy Mackie spent £60,000  on refurbishing the former Indian restaurant.

Wendy, who is also Stalybridge Celtic's chief executive, was reported at the time as saying: "There was a need in the area for a function room and we hope to have plugged it."

On Sunday it will open at 12.30 pm and access will be off the car park.

Once cleared at 2.45, there will be no access via the car park and the doors will be manned by stewards.

Once the game is underway, however, the inner doors that front on to the ground's spectator areas will be opened, thus allowing entry to the Events Centre from inside the ground during and after the game.

Within a few minutes of the game ending presentations to the Oldham man of the match and the winner of the Champagne Moment award will be made in the Events Centre.

In addition to the facilities in the Events Centre there will be pop-up bars around the ground .

Roughyeds feel these new arrangements will add to and improve what were already good facilities at Bower Fold and will add considerably to the game-day experience in the coming season, starting with this Sunday's visit of Widnes Vikings.

Vikings fans enjoyed their first visit to Bower Fold last season in the fourth round of the Challenge Cup which attracted a crowd of 1,247 ---- the biggest attendance of the year.

It narrowly beat the 1,204 that watched Roughyeds' beat Newcastle Thunder in the Promotion Final; the big difference being the number of fans Widnes took to Bower Fold compared with the much smaller support for Thunder at the Vestacare Stadium.

Vikings will have another black-and-white army behind them on Sunday, thought to be between 500 and 800, so Oldham fans will be well advised to arrive in good time and sample the hospitality in the Bower Fold Events Centre.