Bernie leads the Battle Back victory 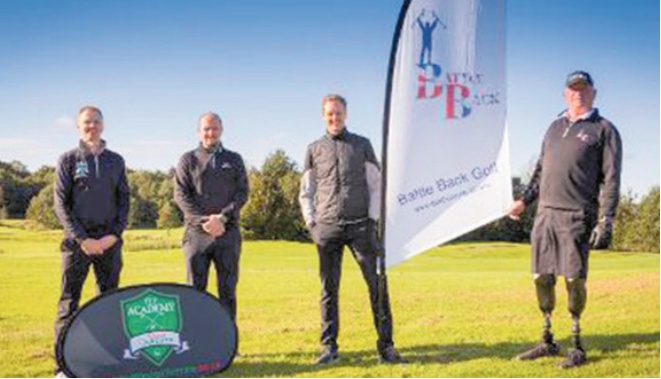 There was an exciting day of golf held in Worsley recently.

Trafford Golf Centre PGA professionals, plus BBC Breakfast host Dan Walker, took on eight Battle Back Golfers in a highly anticipated Ryder Cup style competition at Worsley Park Marriott Hotel and Country Club, which had been postponed since the spring due to the coronavirus pandemic.

Prior to lockdown and Covid-19, the Trafford Golf Centre pros were on track to take on the Battle Back golfers.

Having begun tuition in November 2019, eight injured service personnel linked to Battle Back Golf, which is closely connected to past Invictus Games Captain, Bernie Broad (member at Ashton-under-Lyne Golf Club), progressed well in their game - so well, that they were able to take the win against the pros.

Speaking at the close of the match, BBC’s Dan Walker said: “During the competition, it was incredible to hear stories from the Battle Back Golfers and to understand some more about what they’ve been through.

“It is fantastic to see how much they enjoy the sport, so much so, that we got well and truly whooped! A deserved victory for the guys.”

At the end of 2019, The Academy at Trafford Golf Centre partnered with Battle Back Golf, a programme which utilises golf to enhance the recovery of wounded, injured and sick service personnel, to offer life-changing coaching.

Now the UK’s busiest driving range, Trafford Golf Centre provided six one-hour coaching sessions and gave £100 of ball credit to each participant to help them with their practice.

As a venue, Trafford Golf Centre prides itself on being inclusive for all and sees customers with a variety of disabilities on a regular basis.

From visual impairments to injured service personnel, the Academy team enjoy taking time to introduce new people to the sport, ensuring a fairway into golf regardless of the ability.

Director of Golf at Trafford Golf Centre, Pete Styles added: “We thoroughly enjoyed the competition with the Battle Back Golfers and, although it’s tough to admit it, it was a pleasure to see them take the win.

“At Trafford Golf Centre, we strive to swing the balance in golf and make it more accessible to all.

“Initiatives such as Battle Back Golf proves the sport can assist with rehabilitation, mental health and much more.”

Bernie Broad, Vice Chairman of Battle Back, said: “We really appreciate the support the Academy coaches have given to the veterans and serving personnel to date – it’s clearly worked as we managed to take the win!

“Anyone who is looking to get into golf, ex-services or not, Trafford Golf Centre has superb facilities, high standard of coaching and the technology to help you enjoy the sport.”

l A Sunday Stableford at Ashton saw Chris Cordwell win a cpo on 38 points to lead in division one from Martin O’Keefe, one more than Adrian Reece.

In division two, it also needed a cpo on 40 to take Mike Scowcroft first past the post from Paul Harrison and in division three Paul Thompson was a clear winner on 37 points from Ian McKean and Bailey Kilgannon, both 34.

The Tuesday Stableford at Ashton had the two divisions led in by Mo Akram with a great haul of 43 points and Graham Hughes also 43.

The Twilight Stableford at Ashton was won by Phil Platt with 17 points from Danny Andrew 16.

l The coveted Hibbert Cup at New Mills was won by Joshua Bannister after a tense cpo on 66 with Michael Leddy, one less than Rob Edwards.

It was closer in the Wednesday Stableford, with Kevin Lloyd winning a cpo on 39 from Phil Oakes, one more than Vinny Fraggatt.

The Denton Sunday Stableford was won by Terry Pottage with 34 points from Mark Alexander 33 and Amir Nazir 32.

The second Race to the Start Stableford at Brookdale had Peter Thornley on top with 40 points from Thomas Barlow 39 and Ryan Goodall 38.

l It was close in a Stableford at Dukinfield with Adam Stones winning a cpo on 40 points from Tom Hignett with Kevin Parr, Craig Tinto and Paul Smith locked on 38.

l A Gents Open BB Stableford at Saddleworth was won by Mike Robinson and Paul Stone (Cleckheaton GC) with 48 points from Gary Banks and Stamford’s Paul Murray 47 and Peter Bate and Paul Trolan (Brookdale) who won a cpo on 45 from home stars Nick Kerin and Dean Jagger.

A Pro’s BB Stableford at Saddleworth was led in by Lee Melia and Mark Orme with 48 points, one more than Lee Thompson and Phil Bennett.

A Pro’s singles Stableford at Saddleworth saw Michael Keaney in charge with 39 points, one more than G Bearpark and Richard Hughes.

l A singles Stableford at Stamford was very close with Stuart Mulvaney winning a cpo on 38 from James Woodcock, one more than Nicholas Rabbeth and Kevin Duffy.

l There was a pleasing full house for the latest Alliance fixture and High Legh Park Golf Club put on a great venue both on and off the course and were blessed by reasonable weather as the final groups just about beat the rapidly fading light.

The quality of the course and the excellent greens invited some good golf and it reaped its rewards in a terrific competition for the prizes on offer.

It was back to his golfing roots for Disley assistant professional Ian Ridgway, who spent several of formative golfing years at High Legh and was delighted to meet up with his old friend Andrew McKenzie the teaching professional at High Legh.

Ian was inspired to post a five-under-par 41 points to win the individual professional prize by a point from Rob Braithwaite, Grant Hamerton (Pike Fold) and his Disley boss Scott Jackson.

Davenport’s Jamie Howarth found an excellent partner in club colleague Brad Cooke as they took the pro am section with an impressive 46 points from Rob Braithwaite and Matthew Whittaker (Helsby) who won a cpo on 43 from Craig Corrigan and Mark Riley (Leigh).

Swinton Park’s Jimmy O’Reilly also found an excellent partner in Paddy Knowles (Worsley GC) as they combined superbly for 43 points to win the am am section from Steve Finan and Martin Dwyer (Stamford) 42 and Adam Wells and Ian Fearne, also Stamford, 41.

Taking the nearest the pin prize to complete a great day for the Alliance was Mark Riley.