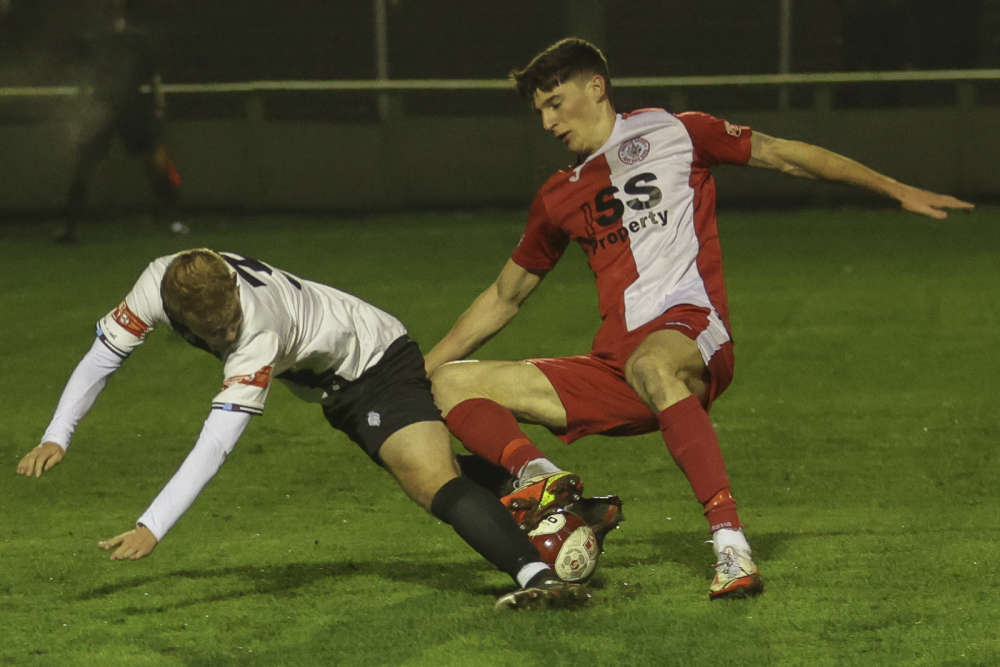 A single goal was enough to take Ashton past their local rivals and into the semi-finals of this season’s Manchester Premier Cup.

The decisive moment arrived with ten minutes left as Ben Hardcastle’s through ball put Florian Yonsian clean through on Hadlow and although his touch was too heavy when he pulled the ball back Osebi Abadaki was on hand to fire home at the near post.

The visitors had started on the front foot and Michael Brewster fired straight at Hadlow following good work by Harvey Macadam and Will Hall before Abadaki sent a wild left wing cross over the bar. Brewster was again involved as a great run along the by line saw Hall head wide of a gaping goal from inside the 6 yard box.

On the half hour Brewster fouled Banister 30 yards out and ex-Robin Mason Fawns struck a fine free kick which clipped the top of the crossbar and Abadaki’s latest cross dropped perfectly for Tom Bentham to bring a great save out of Hadlow close in.

On the restart a crossfield pass for the hosts saw Levi Phillips reach the by line with Hall needing to clear his cross for a corner which was fisted out for Riley to hammer it over the top. A quick break then saw Michael Raynes needing to cut out a cross with Sam Baird’s hamstring pulling in the chase and a long ball saw Hartley beaten to it by Phillips who fired over.

Fawns was then able to advance through midfield before firing a left foot shot narrowly wide and Phillips’ inside pass saw him hammer another effort over. Pratt managed to beat the offside trap but was foiled by Hartley on the edge of his area and after the breakthrough Andy Keogh forced Hartley into a low save following a 1-2.

The final chance for the hosts to level saw a great first time pass send Banister into the area from where he placed his effort wide of the far post.