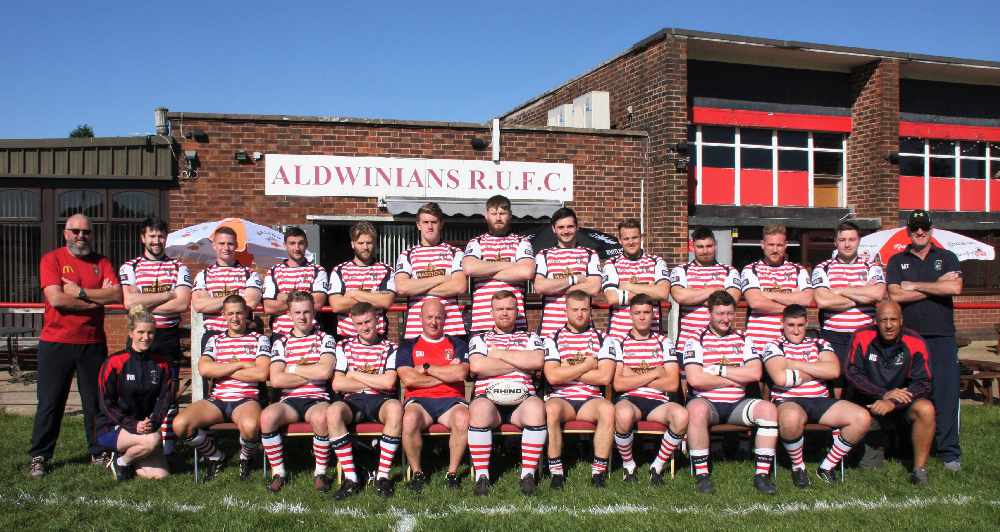 Only one of two fixtures played on the day, with the Ormskirk pitch having coped brilliantly with the deluge of rain in the previous 48 hours.

Aldwinians responded to the Ormskirk kick off by driving the ball back at pace through captain and prop, Connor Prendergast and the recalled Andy Gidman setting a platform in the home 22 area. Further drives were resisted by a solid defence but in the end a forced error gave Aldwinians their first penalty which Dan Martin sent over the posts for a 0-3 lead on 8 minutes. A solid start which was soon to be seriously impaired by a rash decision by wing forward Mike Moreland to punch an Ormskirk prop in full view of the referee. An immediate red card on 10 minutes was shown and that initial lead looked as though it would be short lived.

In that opening period, the home side had two early injuries to their other prop and their fly half requiring replacements, but this did not initially affect their advantage in numbers.

Aldwinians held out only until the 15th minute when, bursting through some weak tackles, the home backs got on the board with a converted try for a 7-3 lead.

The final match statistics show that the home side only scored once more in the game - a try in the 56th minute. In the intervening 41 minutes Aldwinians scored two tries and a conversion. The first came on 27 minutes from Prendergast, setting the example, after a great break out of defence by full back Tom Hughes which was carried on by the marauding forwards with second row Harry Catlow in dynamic form. A penalty then led to a line out and the maul that led to the try. The second try came on 48 minutes out of an Ormskirk attack. As Ormskirk used their advantage in numbers to try and stretch the visiting defence and tire the forwards, a keen eyed Wade Martin on the left wing, came infield and intercepted the centre’s pass to race 70 metres and touch down under the posts which Dan Martin converted for an amazing 7-15 lead.

This lead was not a fluke, it was built on continued front foot rugby, a domination in the scrums from the seven man pack and solid line out play. Defensively, there was still a tendency to tackle too high which allowed Ormskirk a number of attacking opportunities, but importantly when defending in the 22 area, Ormskirk were not allowed to break through. Going in 7-8 ahead at the break would lift Aldwinians for the likely backlash from opponents who were going strong in the league and would not want to lose at home for the first time this season.

After the break Aldwinians continued in the same vein, scoring that Martin try on 48 minutes, and pushing the Ormskirk pack back in the scrums. Obviously there was some tiredness creeping in which allowed Ormskirk more space with ball in hand to evade tackles. They worked the ball to the left wing with support and messed up a good chance to score in the corner. Still in Aldwinians’ 22 area, they drove towards the line but were ripped of the ball at the key moment and stand off Alex Hughes cleared to touch. Back came Ormskirk again opening up space across the field and allowing the scrum half to kick cross field to the unmarked right wing who dived over in the corner in the 56th minute to reduce the arrears to 12-15.

With a quarter of the game to go, Ormskirk were closer to turning the tables on a valiant Aldwinians performance. However, try as they certainly did, they could not engineer a clear scoring opportunity either by way of try or penalty. Credit to the defensive resolve shown by all the visiting squad, and their positive mindset throughout the whole match to secure an important away win and stall Ormskirk’s progress.