Aces Ride Away With New Record 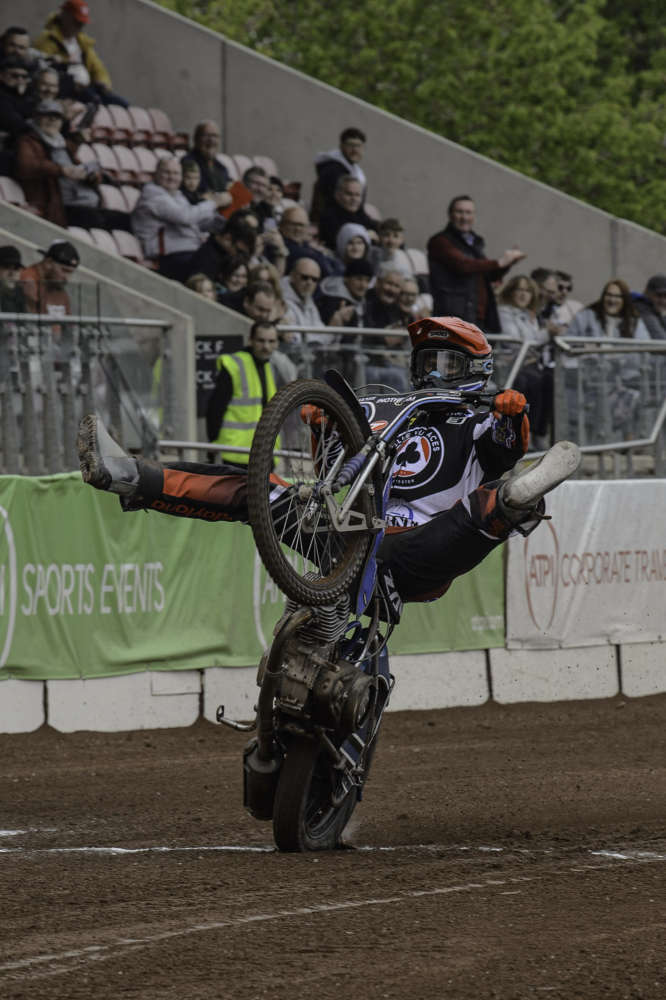 A large Bank Holiday crowd welcomed former Belle Vue No.1 Matej Žagar back to the National Speedway Stadium on Monday

The Slovenian Grand Prix star proved to be the catalyst to inspire a massive turnaround in the Aces’ fortunes as they romped to a record 64-26 victory over reigning Premiership Champions Peterborough.

The Aces suffered a torrid start to the season, losing all four of their League Cup matches in the Round-Robin group with Sheffield and Wolverhampton, where it was clear they were still one rider short of a successful side.

Delays with visas, caused by the war in Ukraine, made it difficult to secure new riders, but the hard work of team boss Mark Lemon paid off when it was announced last week that agreement had been reached for Žagar, who previously rode for the Aces from 2013-2016, to return to Manchester for the start of the League campaign.

And whilst Žagar hit the ground running with a 10+1 score, victory was gained with a formidable team performance, as Max Fricke, Jye Etheridge and Brady Kurtz all stepped up from their League Cup form with dazzling displays, including a faultless 15-point maximum from skipper Kurtz.

It was the Aussie duo of Fricke and Etheridge who got the Aces off to a flying start, with Fricke jetting from the start of heat 1, and his partner coming around the outside to join him by the end of the first lap.

Reserves Tom Brennan and Norick Blödorn slammed home another 5-1 maximum in the second race, and Charles Wright came from behind to pip Ulrich Ostergaard on the line as Žagar took his first win in heat 3.

Chris Harris suffered an engine failure on the start line of heat 4, and although teammate Jordan Palin made a good start, the Belle Vue pairing of Kurtz and Brennan quickly went either side of him to record a fourth successive maximum as the Aces led 20-4.

Panthers No.1 Michael Palm-Toft stopped the rot by relegating Wright to third place in heat 5, but Belle Vue continued to stretch the lead in a fiercely dominant performance, and it was heat 9 before Peterborough claimed their only race winner though Harris, who became the only visitor to defeat Žagar.

Despite the one-sided scoreline, there was still some quality racing from the Aces, with Etheridge starring in some of the best action.   He was only denied a maximum when a slight heat 10 mistake allowed Ostergaard past him.

Kurtz and Fricke went into the final nominated race on maximum points, but they were surprised by Palm-Toft who went through the middle of them to take the lead.

However Kurtz was in no mood to be denied his maximum and squeezed around the outside of the Panthers’ No.1 on the third lap, with the pair banging handlebars and Kurtz clattering the fence before emerging in the lead.

The Aces travel away to Ipswich tonight (Thursday) for a Premiership fixture, whilst the Belle Vue Colts are in action at the N.S.S. tomorrow (Friday) when they entertain Leicester Lion Cubs in the National League.

The Colts then visit Berwick in another NL clash on Saturday, with the Aces visiting Peterborough on Monday.