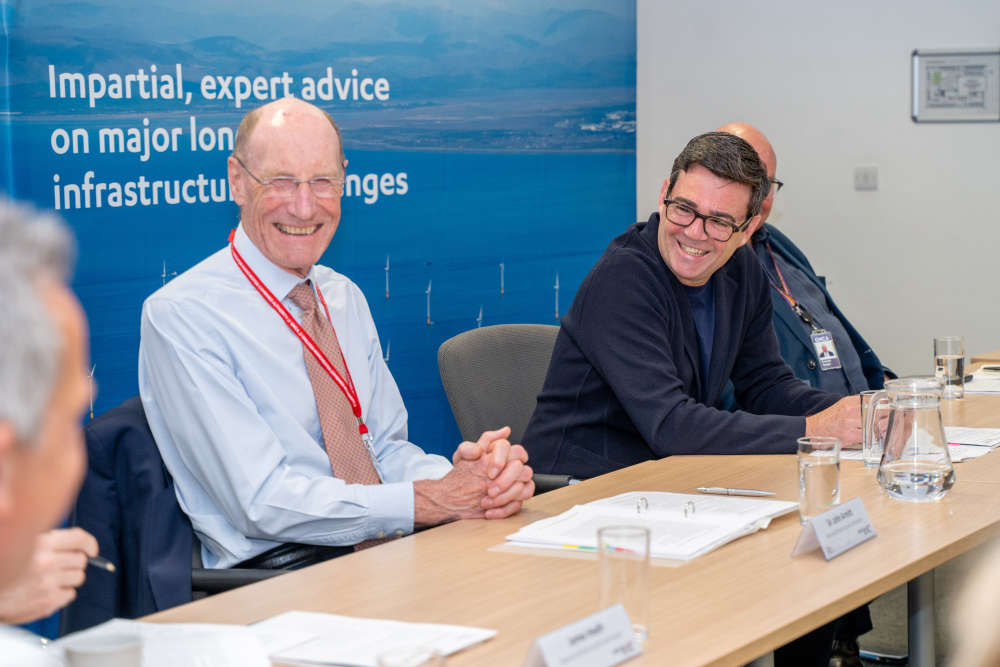 A top government advisor has warned that Greater Manchester cannot rely on 'handouts' from London and must raise money itself to fund some of its plans.

Sir John Armitt, who is the chairman of the UK’s National Infrastructure Commission (NIC), made the comments in Manchester on Monday (13 June).

His trip to the city was the start of a nationwide tour meeting local leaders to inform his report on the country’s infrastructure needs for the next 30 years.

This includes high speed rail links which have controversially been cut – although Sir John says the HS2 Golborne link is ‘still up for discussion’.

Speaking to the Local Democracy Reporting Service, the former railway industry executive said he has ‘sympathy’ with the region’s calls for an underground station at Piccadilly, but said this would cost a lot of money.

But he said local leaders should also look at raising revenue themselves.

He said: “There will be a requirement for Manchester to play its part and for the mayor, as in any city, to find ways in which he can raise his own funds within the city.

“Part of the challenge is to give him the freedom to be able to raise those funds.

“I think it is important because at the end of the day, Manchester’s pride in its success will be greater to the degree to which it’s done it itself rather than rely on handouts from London.

“But, equally they pay their general taxes to central government and therefore it’s not unfair or unreasonable to ask government to give them a hand as well.”

The NIC, which is an executive agency of the Treasury, has called for more devolution to major conurbations like Greater Manchester over the last two years.

This includes devolving more decision-making powers and funding – although the commission does not directly make recommendations about taxation.

Sir John praised the government’s multi-billion pound investment in public transport which Greater Manchester benefited from to the tune of £1bn.

However, he called for more regular cycles of five-year financial settlements.

He also acknowledged that the government does not have plans for a new line from Manchester to Bradford, connecting to Liverpool and Leeds despite the ‘very strong’ recommendations to improving connectivity across the North.

But he recognised the huge costs involved in creating inter-city connections.

He said: “You’re never going to please everyone.

“The £100bn roughly, which has been allocated is a very large sum of money, probably in itself will take 15 to 20 years to deliver.

“The key thing I think is to now get on with making sure that that money gets spent as quickly as possible, HS2 into Manchester gets delivered as soon as possible, improvements across the TransPennine link get delivered as soon as possible and the upgrades on the Eastern side of the country are taken forward by Network Rail and equally the spur from Birmingham across to Nottingham should be identified as potentially being a very valuable link.”

Commenting on the government’s recent announcement that the HS2 Golborne link would be scrapped, Sir John said it is ‘still up for discussion’.

He said the land required to deliver the £3bn rail link will remain safeguarded for a few years and the programme could be brought forward at a later stage.

However, plans to create huge concrete viaducts for HS2 at Piccadilly rather than an underground station will have to be challenged in parliament, he said.

He said: “I think inevitably, as you would expect, cities in the North will continue to bang the drum and try to get as much as they can out of government in the short term and in the medium term.

“The key thing is to get something in the ground as quickly as possible which is going to improve the services for people and increase the opportunities for the North West.”

The commission has also expressed frustration about a lack of progress on heat decarbonisation, hydrogen and carbon capture storage in recent years.

The next national infrastructure assessment, which is set to be published in autumn 2023, will partly focus on how the country can cut carbon emissions.

The three strategic themes of this assessment will be: achieving the legally binding net zero emissions target, protecting the environment and enhancing climate resilience, and levelling up economic prosperity and quality of life.

Ministers are required to respond to the NIC recommendations within a year.