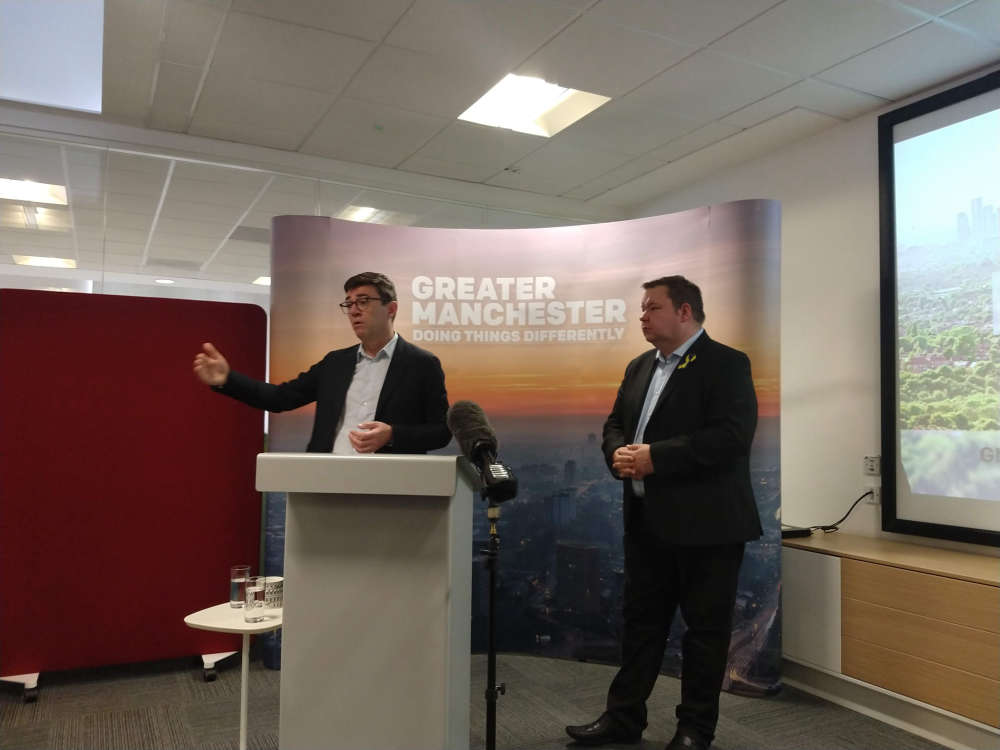 Andy Burnham has set out his 'red line' as Greater Manchester goes into negotiations with the government over the revised Clean Air Zone plans.

The Labour mayor said local leaders will not accept a charging Clean Air Zone, calling for cash incentives instead – but he dismissed claims of a 'climb down'.

It comes after the controversial scheme remains under review with seven weeks left for the city-region to agree a new proposal with the government.

But the fast-approaching deadline of July means the public may not be consulted on the revised Clean Air Zone proposal until after it is agreed.

Speaking at a press conference on Friday (May 13), Mr Burnham set out Greater Manchester’s ‘red line’ ahead of negotiations with the government.

He said: “We will not accept a charging Clean Air Zone in Greater Manchester.

“If that is what the government wants, it will have to impose it on us.”

Mr Burnham will now write to all Greater Manchester MPs, asking them to support this position and calling on Conservatives to stop ‘playing politics’.

The mayor criticised his opponents of spreading ‘misinformation’ about the Clean Air Zone and who is responsible for it ahead of the recent local elections.

However, he denied his latest position on the Clean Air Zone is a ‘climb down’.

He said: “I personally don’t see how you can possibly call it a climb down.

“But a plan agreed pre-pandemic clearly was not going to work post-pandemic and we were the ones who blew the whistle on that – not the government.

“[We] went back to the government and said the position isn’t workable and we’ve negotiated the position that allows for a non-charging zone.”

Greater Manchester’s Clean Air Zone, which was set to start charging certain vehicles from May 30, was paused following a public backlash earlier this year.

Local authority leaders asked the government to delay the deadline by which councils had to bring air pollution down below legal limits from 2024 to 2026.

It comes after research found that supply chain issues in the vehicle market caused by Covid meant the cost of new vans had increased by up to 60 pc.

Mr Burnham said no charges would be needed if the deadline was extended by two years – but he claims the government only offered a one year delay at first.

Together with the nine Labour leaders in Greater Manchester, the mayor wrote to the Prime Minister after the two-year delay was agreed, calling for all CAZ charges to be scrapped – and this had the backing of Bolton’s Tory leader too.

But writing back eight weeks later, Boris Johnson did not rule out charges.

Transport for Greater Manchester (TfGM) must now present evidence to the government that air quality compliance can be achieved without any charges.

Instead, the mayor is arguing for a non-charging Category B scheme which would identify the non-compliant buses, lorries and taxis using Greater Manchester’s roads and offer owners funding to upgrade their vehicles.

Under this scheme, vans would no longer be eligible for any CAZ funding.

Trafford council leader Andrew Western said that the government would not provide funding to upgrade vehicles if it is not necessary to meet the targets.

He said: “We are now in a position where we believe we can achieve compliance without vans being included in that and that’s why they’re out the scheme moving forward.”

Coun Western, who has this week put himself forward to become a Labour MP for Stretford and Urmston, said he would be writing to the Secretary of State together with Mr Burnham to set out Greater Manchester’s general position.

He promised there will be a ‘range of work’ to engage with the public – and in particular people who would be affected – on the practicalities of the proposal.

However, Mr Burnham said a ‘meaningful’ consultation may not take place until after the general terms of the new scheme are agreed with the government.

He added: “It may not take to July. If the government agree with us, they could write back to me next week and say, we agree, let’s consult on it. The ball is not only in our court and we’ve always got to work through the government.”

The mayor said all of the Clean Air Zone infrastructure will be ‘switched off’ when air quality compliance is achieved and the Automatic Number Plate Recognition (ANPR) cameras could be given to Greater Manchester Police.