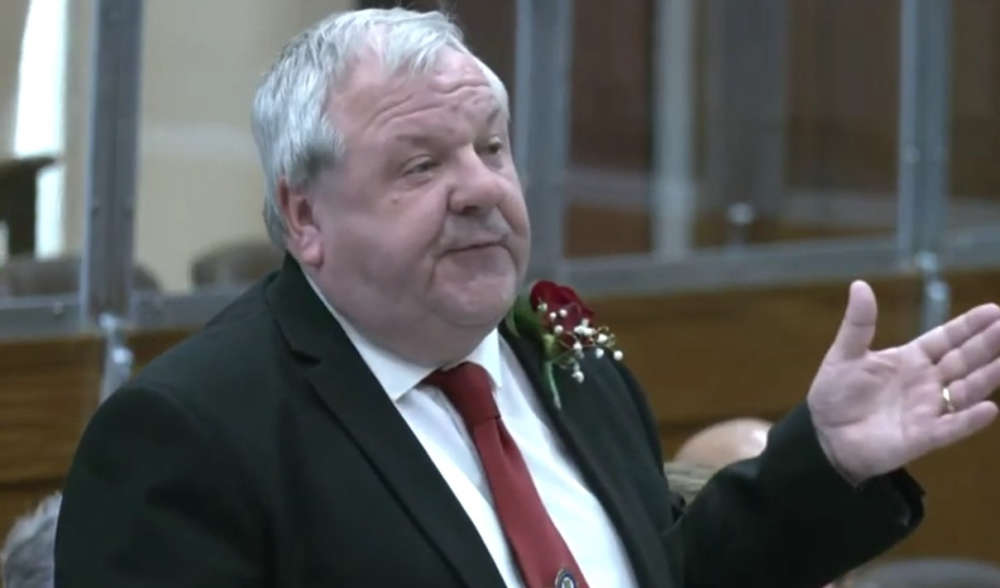 'We're not paedophiles' a councillor proclaimed as he railed against 'evil' election campaign smears in an astonishing town hall outburst.

Labour councillor Steven Bashforth, who represents Royton South, was speaking at full council as councillors paid tribute to members who lost their seats in the 5 May local elections.

These included former leader Arooj Shah, who was defeated by the Conservatives in Chadderton South, and ex-cabinet member Hannah Roberts whose seat in Royton North was also won by the Tories.

Campaigning during the pre-election period, especially in the Chadderton South ward, was dogged with accusations that the Conservative party had been distributing ‘racist and misogynistic’ leaflets from a third party – a claim the Tories denied.

The leaflets – seen by the Local Democracy Reporting Service – also referenced a ‘cover up’ of allegations of child sexual exploitation in the borough. Allegations of CSE are currently the subject of an independent review which was due to report in January, but which has been delayed to assess new evidence.

Speaking at the annual meeting of the full council, Coun Bashforth said that that many councillors have lost their seats because of the ‘lies and the evilness’ that was apparent during the election campaign.

The councillor said that he had been called a ‘paedo’ by men driving past in a car while out campaigning on the doorstep.

“Some of the other speeches that we’ve heard referring to a particularly evil, nasty, despicable campaign that was fought this year,” he said.

“I’ve been a councillor for 20 years this year, and before that I was involved in the Labour party in Royton, and all those years I’ve never seen anything as disgusting as the stuff that went out.

Coun Bashforth made the comments during a speech paying tribute to Peter Davis, who was defeated in Failsworth West ward by Failsworth Independent Party (FIP) candidate Sandra Ball – bolstering their ranks in the council chamber to five.

Coun Brian Hobin, leader of the FIP group, took exception to Coun Bashforth comments, saying: “I’m sorry to interrupt but there’s an insinuation there from the councillor.

“There was nothing in any campaign in Failsworth that had any nastiness towards Peter Davis. He’s held in the utmost respect by these five people here and there is nothing bad against him by us.

“We won’t accept that accusation at all.”

Coun Bashforth replied he didn’t ‘accuse anybody in Failsworth’, but said he was generalising about the tone of the whole campaign.

“I think the material that went out was in part racist, misogynist, but the most evil part of it was the active attempt to associate good people with paedophiles,” he told councillors.

“And associating good people in here with evil goings on that have yet to be proven.

“That’s despicable. I recall walking with Peter in Failsworth knocking on doors, talking to people in the streets and guys stopping, winding the windows down and shouting ‘paedos’ at us.

“That’s what I mean. I don’t care who started this. The fact is that somebody has and it has to stop.

“It’s bad for democracy. It’s bad for all our parties. It’s bad for this town. We’re very good at talking our town down, and it’s about time that we bloody well stopped doing that.

“We do a lot of good things in this town – a town that’s one of the most deprived in the country. And yet we achieve. We build on what we’ve got and we maximise it for the benefit of our people.

“We don’t need this sort of nonsense and evil nastiness that’s going around.

“I’m not a paedophile and yet I’m being called one. Peter’s not, Amanda isn’t, Abdul, neither are you over there – nobody is. And yet people are calling us this.”

Debbie Abrahams, the MP for Oldham East and Saddleworth asked the Prime Minister in the House of Commons on Wednesday whether he would ‘condemn those Oldham Conservative candidates who delivered toxic, racist, misogynistic’ leaflets’ during the local elections.

Boris Johnson replied: “I’d be very happy to look at those details if she’ll send them to me.”