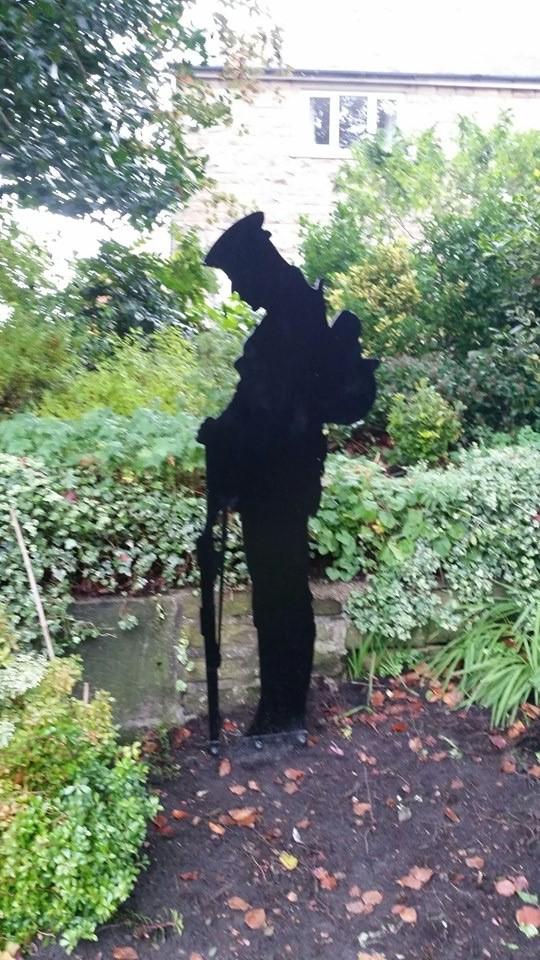 There will be added poignancy when two Saddleworth communities mark Remembrance Day this year.

In Dobcross, a dramatic silent soldier, funded by the Dobcross Village Community, will stand sentinel over the proceedings from a leafy site opposite Holy Trinity CE church on Woods Lane.

And a special dedication will enshrine the silent soldier into the community at 10.30am on Remembrance Sunday (November 10) in the community garden, facing the Post Office.

The occasion will include a Prayer of Dedication, read by Graham McGuffie, and the playing of the hymn tune ‘O Valiant Hearts’ by Dobcross Youth Band.

The prayer was written specifically for Holy Trinity Church in 2008 by the Right Reverend Nigel McCulloch, who, at the time, was National Chaplain to the Royal British Legion and Bishop of Manchester; the prayer is ideally suited to this occasion.

The playing of ‘O Valiant Hearts’ was sung at the Dedication of the ‘Tomb of the Unknown Warrior’ in Westminster Abbey on November 11, 1920.

After the dedication, everyone is invited into Holy Trinity for a Service of Remembrance, beginning at 10:45am, and includes the Last Post, Two Minute Silence and Reveille.

In the meantime in Austerlands, lamppost poppies and a soldier’s silhouette, see picture, will underpin the increased number of local residents expected to attend the unofficial Remembrance Day gathering, at what is believed to be Saddleworth’s oldest Great War memorial.

In 1979, ladies of the Austerlands Village Improvement Association committee cleaned their war memorial ready for Remembrance Sunday - a  practice continued ever since and grown considerably recently. 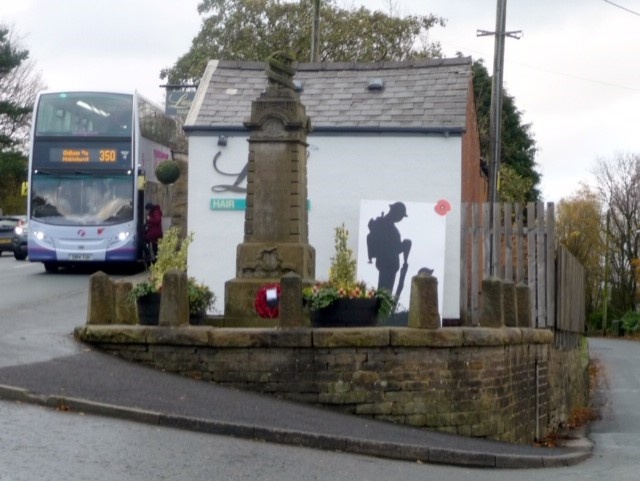 This year, plans are in place for a temporary road closure of Heywood Lane, at its junction with Huddersfield Road.

Austerlands resident David Needham said: “Last year the crowd at the event exceeded all our expectations.

“The road closure will operate from around 10.30am to 11.30am to cover the assembly and duration of the service. Huddersfield Road will remain open and buses should not be affected.

“A special service sheet has been printed for Remembrance Sunday, which includes a section on the history of the memorial as next year marks the centenary of its unveiling.

“It is thought not only to be the oldest Great War memorial in Saddleworth but also the only one to be raised by public subscription.

“And a 1915 poem written by famous local poet Ammon Wrigley ‘The Lads of Austerlands & Scouthead’ will be featured at the ceremony.

“Interest last year was certainly heightened with the introduction of a soldier’s silhouette and lamppost poppies installed Scouthead and Austerlands Community Group and this will be repeated again.

“The community group has also agreed to provide marshals for crowd control and traffic management.”

At the conclusion of the service, a free serving of homemade meat and potato pie is available at the newly refurbished Spinners Arms, Woodbrook Avenue, where significant funds were raised for the British Legion Poppy Appeal.

The road closure will operate from around 10.30am to 11.30am to cover the assembly and duration of the service. Huddersfield Road will remain open and buses should not be affected.