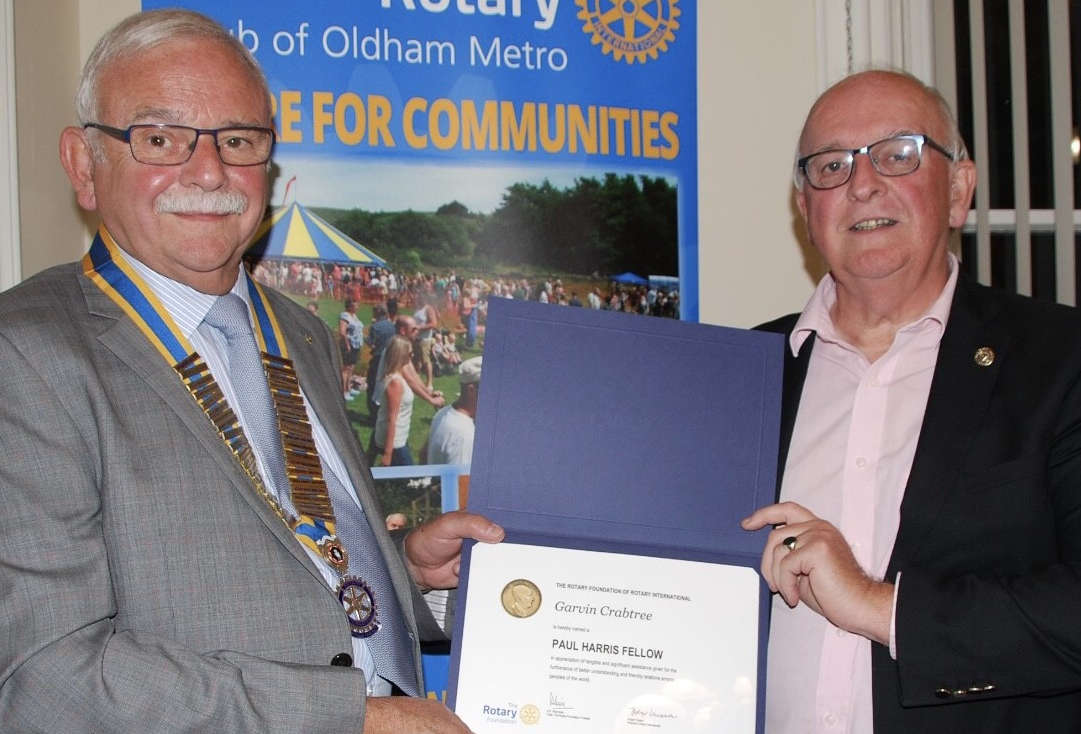 He received a Paul Harris Fellowship for outstanding work in Rotary - particularly during the pandemic - and more than 27 years as governor of North Chadderton School.

Over the last 14 years, he has been firstly chairman of the school governors and, after seeing the change to Academy status, he became chair of the Local Advisory Committee of the school. Before that, he chaired the finance committee.

Garvin has been an active and enthusiastic organiser of Rotary events, leading the Sportsmen’s Dinner Committee for many years and he has been instrumental in organising the successful East v West evenings, 60s nights, Folk Nights and Jazz nights and he has been on the Saddleworth Show Committee.

Currently, he is also active in liaising with the club’s village in Uganda.

During his Rotary career which started in 1984, he has chaired numerous club committees and is an ever-present help at Rotary events.

He was President in 1992/93 and again in 2001/02 and during the pandemic stepped in to take over the presidency in September 2020 and to assist Michelle Greenwood, the club’s president nominee, until June 2022 - an unprecedented 22-month spell.

All good teams need a great leader and the members took time to congratulate Garvin, a great leader of which Rotary Oldham Metro is rightly very proud.

Meanwhile, Dovestone W.I. has been recognised for its ‘inspirational’ work in the community.

Rotary Oldham Metro is to present them with a Certificate of Appreciation, the equivalent of a Paul Harris award, for demonstrating a shared purpose with the objectives and mission of Rotary: service above self.

Founded three years ago, Dovestone WI, have immersed themselves in the community and lead on a host of major initiatives. The award will presented to their president, Jess Moreland, later this month.

Garvin Crabtree said: “Dovestone WI's achievements are outstanding and serve as an inspiration to us all and is certainly deserving of Rotaries top award.”