Steven says thank you to The Christie 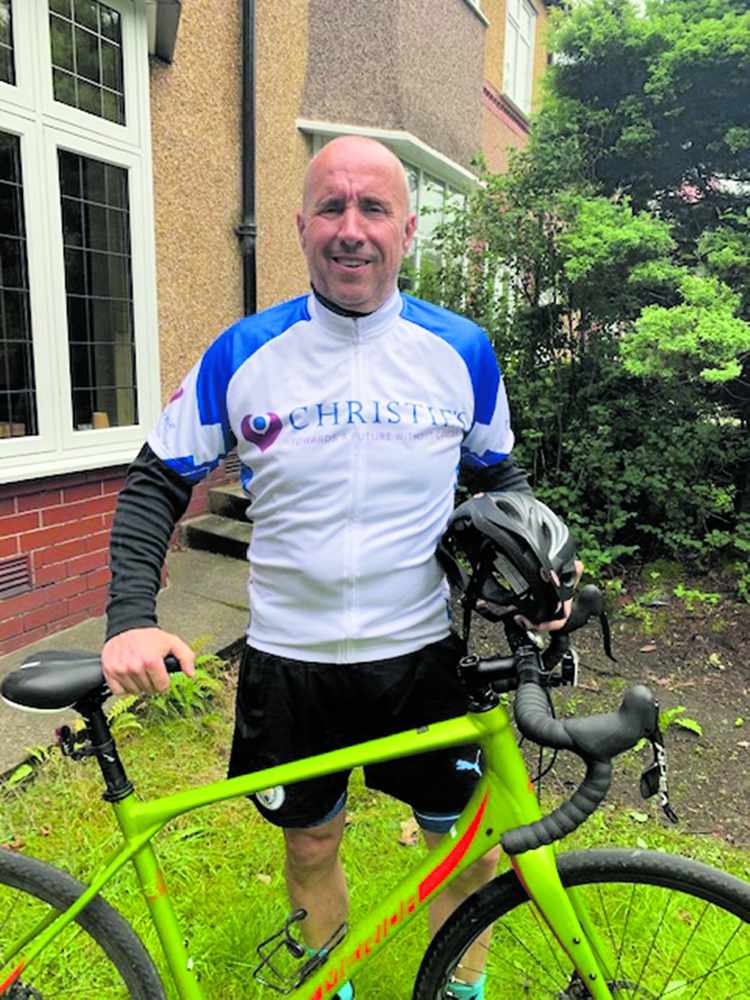 Determined Steven O'Neill is aiming to raise funds for The Christie charity by taking part in the annual Manchester to Blackpool bike ride on Sunday.

Steven, 50, who was diagnosed with bowel cancer only 18 months ago, was treated at The Christie last year and is now hoping to raise more than £2,500 by taking to the road.

Steven, who works in the probation industry, will cycle the 60 miles from Salford Quays to Blackpool’s South Promenade, before cycling a further nine miles to Fleetwood!

Steven, who lives in Grasscroft, Saddleworth, with his partner Simi, said: “I was diagnosed with bowel cancer just after my 50th birthday which was a big blow. I had surgery followed by six months of chemotherapy.

“But I received excellent care at The Christie and I want to help give something back by taking part in the Manchester to Blackpool bike ride.

“I’ve been training five days a week which starts with a 25km and then working up to a final ride each week of more than 80km. I train all over Saddleworth mainly, but my weekly long ride takes me to The Christie and Manchester city centre.”

Steven admits that cycling is relatively new to him and that one of the side effects of his cancer treatment has made it difficult at times.

He said: “I took cycling up again during lockdown having lived quite a sedentary lifestyle before I had cancer. I cycled years ago but nothing to this level. Since then I’ve cycled over 2,500km and although I’m doing a lot of training it has been quite painful as I still get neuropathy (which is caused by nerve damage) following my chemotherapy treatment.

“However the whole experience drives me to continue, and overall I’ve never felt fitter and I’ve managed to lose two stone, which of course is also a bonus.”

Taking place for the 29th time, and postponed due to the coronavirus outbreak, this year’s event will take place on Sunday, September 13. Around 3,500 cyclists will be riding the route from Media City to Blackpool in a bid to raise as much money as possible to help improve cancer services in the region.

Liz Williams from The Christie charity, said: “We’re delighted Steven is taking part in the Manchester to Blackpool bike ride and it is great to see him back in the saddle following his treatment.

“The bike ride is a great way for people of all abilities to get involved in a fun and inspiring event to support The Christie charity and even though the dates have had to be rearranged we are sure it will be just as special as ever.”

Last year’s event raised more than £200,000 for The Christie charity and organisers are hoping to raise even more this year.

You can donate to Steven at https://www.justgiving.com/fundraising/Steve52.