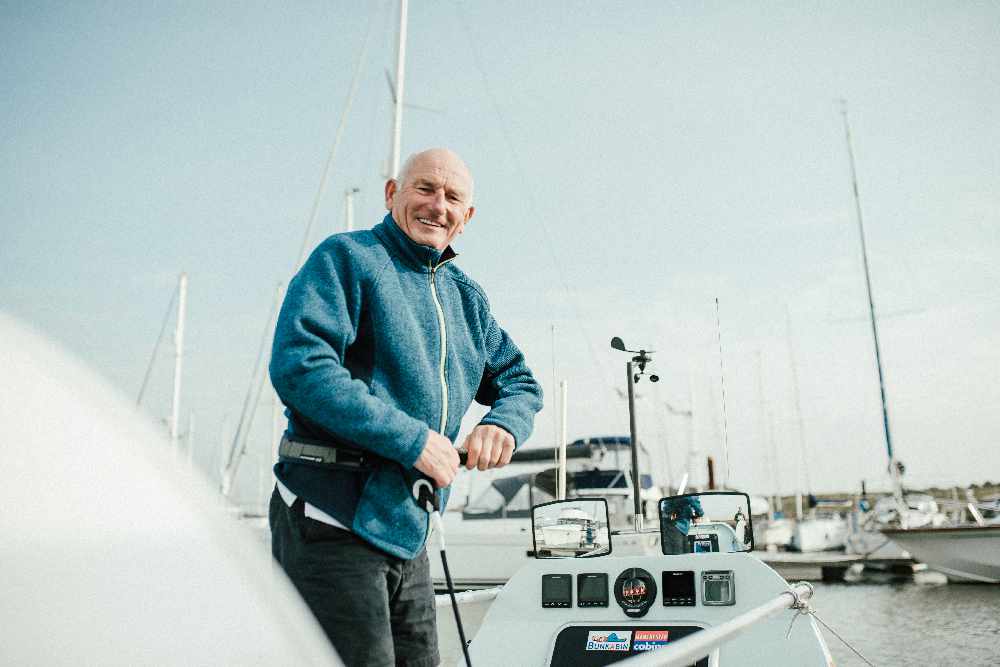 Frank rowed across the Atlantic last year to raise over £1 million for dementia research, becoming the oldest person to complete the Talisker Whisky Atlantic Challenge.

Local businessman Frank Rothwell has vowed to bring the good times back to Boundary Park after completing a £12 million takeover of Oldham Athletic Football Club.

Oldham-based Rothwell, who owns local company Manchester Cabins, has cleared the club's debts in what is understood to be a £12 million deal for the club, stadium and land.

Legendary former manager Joe Royle is also back as director alongside his son, Darren, who has been named the club's chief executive.

The deal ends Abdallah Lemsagam's tumultuous four-and-a-half-year stint as owner of the financially-challenged club, which will begin next season in the National League after becoming the first former Premier League club to be relegated from the Football League last term.

Fans had made their feelings known over Lemsagam's reign over the last 18 months with on and off-field protests.

Rothwell rowed across the Atlantic at the age of 70, holds two Guinness world records and is a freeman of the borough.

He has passed the necessary owners and directors test and the sale will be ratified by the relevant football authorities.

A club statement also said they are at an advanced stage to buy their Boundary Park home from former owner Simon Blitz over the next week.

It added: "This is a significant and hugely exciting development in the proud history of Oldham Athletic and ensures the club can now approach the new season and beyond with a genuine sense of anticipation."

As Rothwell was unveiled to fan groups and media, dozens of supporters gathered outside singing songs and were later serenaded by the new owner as he met them face to face.

'The pain is over now'

"I hope you grasp I’m passionate about Oldham," said Frank Rothwell in what was at times a surreal press conference held in the OEC in the Joe Royle (North) Stand.

"A successful club will have a significant impact on the lives of people in Oldham. The pain is over now.

"I think every football club has its natural level. Where’s Oldham’s level? It’s top of League One, banging on the door of the Championship. That’s where we want to be. It’s going to take a lot of hard work and a lot of fun.

"We can’t promise the Premier League, it’s happened before but that’s a long way off and a major challenge. Let’s get people being proud of Oldham again, talking about the club at the chippy, at school, in the canteen at work.

"I want people to feel like they own the football club."

'A dream ticket for the town with local people'

Speaking emotionally, Darren Royle told a press conference: "It’s a very important day in the 127-year history of the club and for the town and the fans.

"We need to draw a line and look up with excitement and opportunity.

"It’s a new start and opportunity for the club. Some of us will remember the glory years and some of the more barren times. Today’s an opportunity to look forward.

"I’m honoured and delighted after a thorough four weeks of due diligence, the Rothwell family have completed the purchase of OAFC, and are very close to completing the purchase of Boundary Park in the coming days.

"It’s a dream ticket for the town, local people with the best interests of the club and community at heart. We're excited about the future."

'It's great that the people are Oldham people'

Oldham manager John Sheridan told BBC Radio Manchester: "Keeping it quiet was quite hard - obviously the new owners and Darren [Royle] being involved in it, myself who knew for probably four or five weeks who was gonna take over. It's massive for the club.

"It's great that the people are Oldham people. It's great that Darren Royle and Joe are involved as well and for myself, just to know things have been getting sorted out and obviously, most importantly, the supporters."

Oldham Council leader Amanda Chadderton has hailed it as "amazing news for Oldham Athletic, the supporters, the borough and football".

She added: "Darren Royle and his team will bring a wealth of knowledge, experience and enthusiasm with them to Latics and we're looking forward to hearing more about their plans to take the club forward.

"I'm sure the fans will be happy a Royle is once again at the helm, as the name is such a big part of the club's history.

"Likewise, Frank and the Rothwell family are fantastic ambassadors for Oldham and know exactly what it takes to build a successful organisation. As proud Oldhamers, we're delighted they are championing their hometown once again.

"The new owners have the council's full support and we wish them and Latics every success for the coming season."