Rayner gets in touch with nature at Failsworth Growing Hub 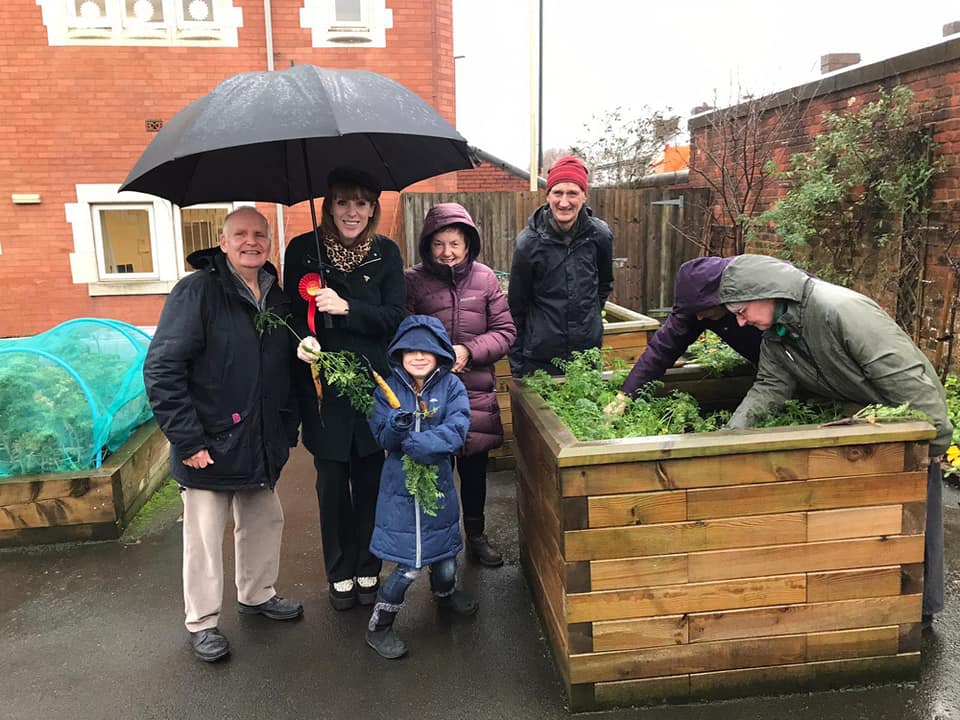 Failsworth MP Angela Rayner got in touch with nature recently as she joined members of Failsworth Growing Hub.

She escaped the chaos of Westminster to get closer to nature and found out how the green-fingered members are inspiring gardeners of all ages.

The group, which is open to all and meets at Failsworth Town Hall on Thursdays from 11am-2pm, embark on a wide range of projects, such as community clean ups along the canal, identifying local wildlife and growing a wide range of fruit and veg which they sell to promote healthy eating and generate funds to allow the club to continue.

Members braved the rain to show Angela their current crop and even gave her some of their heritage carrots to take home.

She said: “It was wonderful to meet members of the Growing Hub and hear more about the brilliant work they do to promote green issues and combat social isolation by bringing people together. They gave me some cracking tips on how to look after my own garden. I’m looking forward to joining them in summer when they’re going to show me how they make their bit of the canal more appealing to local wildlife.”

Angela also spoke to members about plans for a solar farm in Failsworth which will go out for public consultation in February.

Under the Greater Manchester 5-year Environment Plan, the region’s 10 councils are committed to delivering 45MW of solar PV generating capacity between now and 2025. Oldham Council has pledged to become carbon neutral by 2025.

The site proposed for Oldham’s solar farm is the former Ferranti football field at Wrigley Head in Failsworth, directly adjacent to the Rochdale Canal and Moston Brook.

A report produced by consultants has shown that a 1MW solar farm would be feasible and such a facility would produce enough renewable electricity every year to power around 168 homes. The proposed completion date is March 2023.

Angela said: “Labour has ambitious plans to kick-start a Green Industrial Revolution that will create one million jobs in the UK to transform our industry, energy, transport, agriculture and our buildings, while restoring nature.

“Reducing emissions must be a top priority for everyone – from the Prime Minister setting national carbon targets to the homeowner doing their bit to be more eco-friendly – so I welcome the plan to create a solar farm in Failsworth and encourage everyone to have their say when the consultation opens in February.”