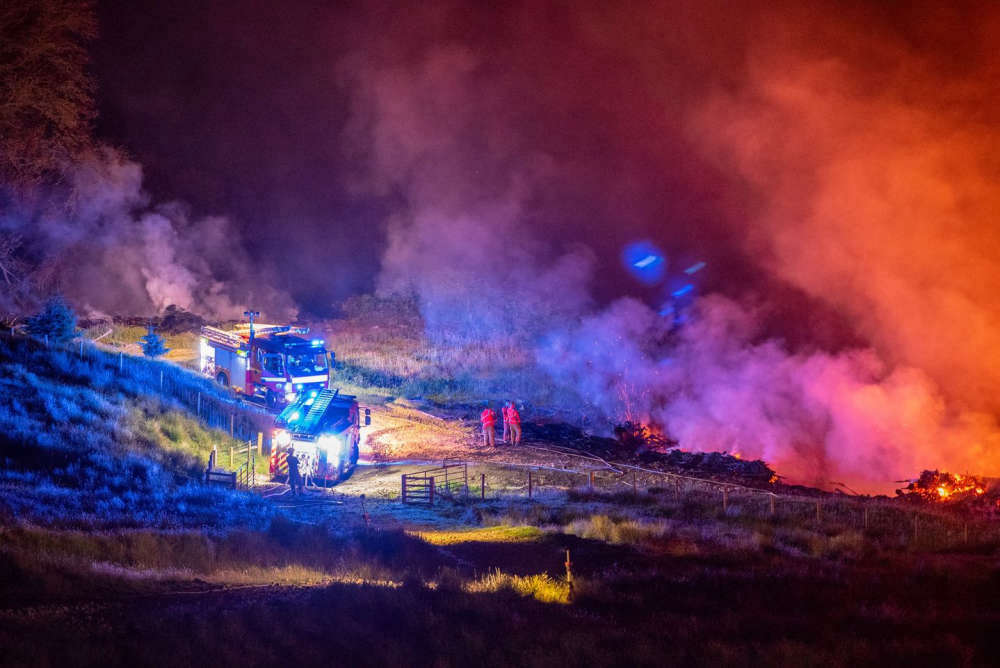 Fire crews tackle one of the blazes last week

Appeal for information after blazes believed to have been started deliberately

Police are appealing for information regarding fires on land near Dovestones Reservoir last weekend.

The fires, between Sunday, July 10 and Tuesday, July 12, were on land near to the car park.

A joint investigation with GMFRS has, so far, established that there were five seats of fire. Traces of accelerant were found in three of the cases.

Superintendent Phillip Hutchinson, of GMP Oldham district, said: “Enquiries are ongoing to identify those responsible for starting these fires which could have had a devastating impact on the land, the wildlife and residents who live in the surrounding area. I ask anyone with information to share it with us as soon as possible.

“Maintaining safety at Saddleworth Moor is of great importance to both ourselves and our partner agencies. Only days before this fire, we attended an event during which we spoke with members of the public about how to use the area in the summer. Unfortunately, during this event, our officers sighted persons posing a risk so three fixed penalty notices were issued.

“I would like to use this opportunity to remind members of the public that there is a Public Space Protection Order in place at Saddleworth Moor – meaning it is a criminal offence to start fires in the area, including BBQs. A breach of the order can result in a £1000 fine.

“I ask members of the public who frequent the area and residents who live surrounding it to report anyone they suspect of planning an illegal BBQ or committing any other crime.”

Jim Wilmott, Greater Manchester Fire and Rescue Service Group Manager at Bury, Oldham and Rochdale, said: “We have seen just how devastating and damaging wildfires can be, especially in Saddleworth, in recent times.

“It’s difficult to understand why anyone would want to deliberately start a fire in moorlands, but sadly it does happen and when conditions are this dry, they grow quickly and easily out of control. For those who do think this is a good idea, you should know that not only does it destroy precious moorland, but it also puts local wildlife and people in danger, causing huge disruption and means our resources are often unable to attend other serious incidents.

“The evidence suggests that these fires at Dovetone in Saddleworth were deliberately started. I urge people to contact Greater Manchester Police with any information they have about this so those responsible can be rightly punished. Our message is strong and clear - never have a barbecue or campfire in the countryside or start a fire deliberately. It’s selfish and dangerous.”

Anyone with information is asked to contact the GMP LiveChat facility or call 101.

Information can also be shared anonymously via the independent charity – Crimestoppers on 0800 555 111.