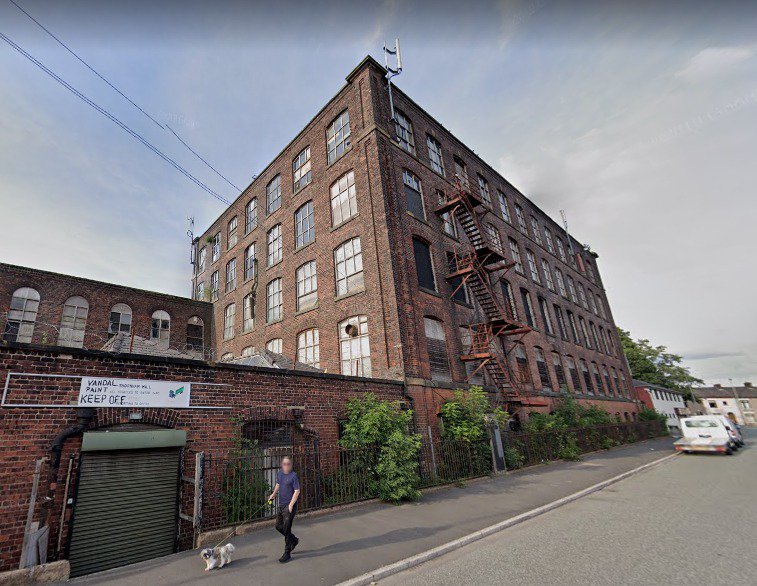 Plans to demolish a derelict Victorian mill in Oldham and replace it with a block of flats are dividing neighbouring residents.

Plans have been submitted to the town hall for the creation of a five-storey apartment block with undercroft parking on the site of Thornham Mill in Royton.

The mill was built in 1885 by Thornham Spinning Co. Ltd and was extended in 1960, but the majority of it has been empty since 1962 when the company went into voluntary liquidation.

The applicant, Blackmores D Ltd, wants to build 72 flats in place of the mill on Oozewood Road.

Councillors in Royton have canvassed nearby residents’ views on the proposals, and say that the 60 responses they received were split.

There were 29 in favour, 29 against and two responses from people who were undecided about the plans, according to Labour councillors Hannah Roberts and Clint Phythian.

A number of potential issues were raised by residents, ranging from concerns about the size of the development, the potential for increased traffic, and the contributions the developer would make to social housing or highways improvement.

Thornham Mill in Royton could be knocked down and replaced with a five storey apartment block. Photo: Calderpeel/Blackmores D Ltd.

One of the objections submitted states: “I do not disagree with the demolition of the mill but I think that the construction of a lot of apartments is too much, too high and not in keeping with the local residential population of houses and I am sure that houses would be much more in keeping.”

Coun Roberts said: “Residents are clearly divided on these proposals, so we felt it was very important to get as many views as possible.

“We’ve relayed all of the points made to planning officers at the council, who have followed up with the developers where appropriate.

“But we want to see decent homes that fit with the community, so having residents involved in the process really helps.”

On the council’s planning portal there have been 14 objections, one supporting comment and one neutral comment about the proposals.

Coun Phythian said: “Across Oldham we need more high quality, appropriate and affordable housing, and every development that we can bring forward on brownfield sites like this reduces the pressure from the government to accept proposals on green belt sites.

“There are issues with this proposal, but we hope we can work with the developer to overcome the challenges.”

Discussions with the developers remain ongoing, and the councillors have committed to consulting the site’s neighbours again if the design is subsequently changed.

The mill has fallen into disrepair and is ‘deteriorating’, according to the developer.

Blackmores D Ltd, says that ‘whilst the building has some historical merit in representing the area’s past in the cotton mill industry’, its derelict state means it is ‘no longer fit for reuse’.

The application is a redesign of a previous scheme for the site by the same architectural firm, Calderpeel, that was approved in 2007 but never realised.

A decision is yet to be made on the application.