Plans for £8.5m housing estate rejected after over 100 complaints

A view across the site across to existing houses on Maltby Court. Photo: HNA Architects.

Plans for an £8.5m new housing estate in Saddleworth have been rejected by councillors over fears it would damage protected countryside.

A proposal to build 40 three and four bedroom homes in Lees had garnered 105 objections from residents.

Under the plans a bridge would have been constructed over Thornley Brook to provide better access for residents, and an area of wildlife habitation created in the west of the site.

Overall, with other landscaping and tree planting, this represented a ten per cent net gain in biodiversity, planning officers said.

But the site, off Maltby Court, has been designated as being ‘other protected open land’ (OPOL) by the local authority.

Consequently planning officers had recommended the application be refused on the grounds that it would result in the ‘incremental erosion’ of the OPOL and the benefits of the scheme did not outweigh the harm it would cause.

This type of protected land status is given to areas which are deemed to have local significance due its ‘beauty, tranquillity, wildlife, recreational value and historic significance’.

Planning officer Stephen Gill said there were positive and negatives about the application which had to be weighed up.

“The matters in favour of the application include the provision of housing, and the type of housing proposed, which will assist in meeting the council’s housing land supply and also address a tenure need,” he told councillors.

“The matters not considered to be in favour of the application include the erosion of 1.5pc of OPOL land.

“The development would result in the loss of part of an area identified as natural or semi-natural open space.” 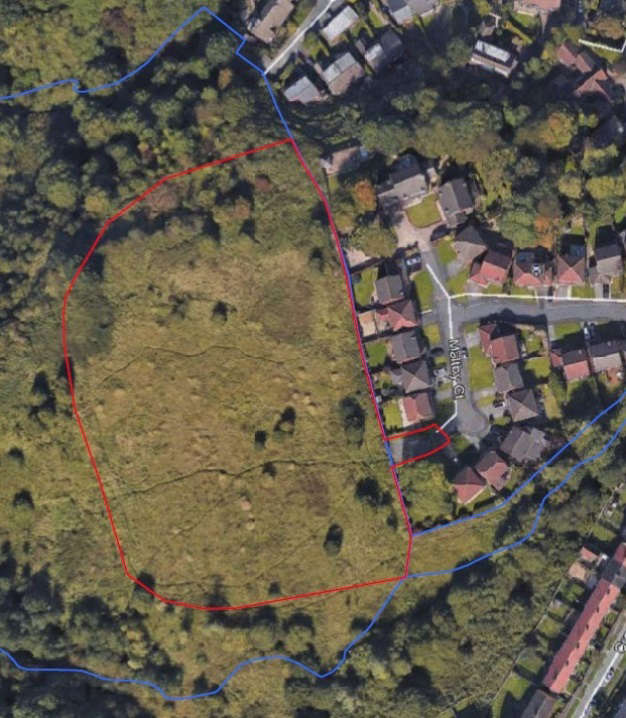 The site where the developer had proposed to build the homes off Maltby Court. Photo: HNA Architects.

He added that Oldham’s overall housing land supply and delivery of new homes had improved ‘dramatically’, meaning that the provision of new homes carried less weight when making a decision.

Hannah Jackson, a resident who spoke against the scheme at the meeting said they had objected ‘in the strongest possible terms’, and took issue with the lack of a continuous footpath for pedestrians in the development.

“There are many of us. We will not stand idly by whilst our protected open spaces are threatened by developers seeking to destroy them,” she added. “We are wholly opposed.”

“We’re really disappointed to see that it was recommended for refusal despite the significant benefits that are going to be delivered, not least the contribution to your housing land supply but also the biodiversity net gain and the opening up of additional land to the public,” she added.

Ms Worden said they understood that it was on OPOL land, but the housing development part would only cover 1.5pc of it.

“It’s in private ownership, it’s not accessible and it’s overrun with invasive species. These issues, along with a number of substantive benefits will be addressed as part of this proposal,” she said.

“There is a national housing crisis. This site presents a valuable opportunity to deliver much-needed market housing.”

However councillors voted unanimously to reject the application.