People caught with barbecues on moors could be fined £90 on spot. 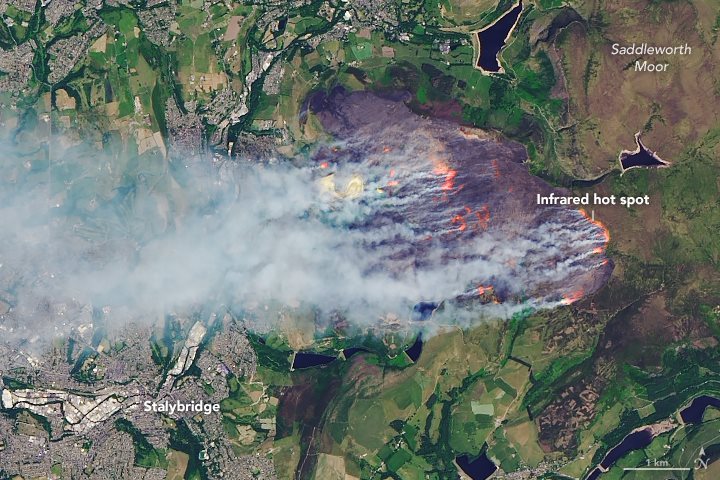 The fire on Saddleworth Moor in June 2018, as seen from satellites. Photo: Nasa Earth.

People could be fined £90 on the spot if they’re caught with a lit barbecue or bonfire on the moors above Greater Manchester.

Oldham and Tameside councils are jointly proposing to introduce two public space protection orders (PSPO) on land spanning Saddleworth Moor and Marsden Moor.
It would mean people will be banned from taking barbecues, fireworks and sky lanterns into the area.
Anyone found to be breaching the orders would be punished with a £90 on the spot fine or face prosecution through the courts.
Last year’s apocalyptic fires forced residents to be evacuated from their homes as the moors blazed for more than three weeks across June and July.
At its peak, the fire covered an area of seven square miles and saw the army deployed to support firefighters tackling the emergency.
Greater Manchester Fire and Rescue Service believe the cause was arson after someone was spotted lighting a bonfire on the moors near Stalybridge.
Councillors say the wildfires killed animals, drained firefighting resources and cost the public hundreds of thousands of pounds.
The PSPOs are designed to prevent a repeat of last year’s catastrophe, and are due to go out to a formal public consultation.
Councillor Allison Gwynne, Tameside’s executive member for neighbourhoods, said that moorland fires were not uncommon but there was evidence to suggest most were caused by ‘thoughtless behaviour’.
“I believe the PSPOs, used alongside education and information, would help us to significantly reduce the number of fires,” she said.
“They not only cause large-scale destruction but also needlessly endanger people and put a strain on already stretched services.
“Last year’s fires could so easily have resulted in tragedy.
“It was only the tireless efforts of so many firefighters, soldiers and others – as well as a hugely impressive community response – that ensured no lives were lost.”
There are exemptions for private residential areas but any land that has a public right of way or public access is included as part of the PSPO.
If approved, they would be in place for three years.
Oldham’s deputy leader and cabinet member for social justice and communities,  Coun Arooj Shah, added: “Unfortunately, over the last few years several huge fires, some which have been started by discarded barbecues, have put lives and property at risk.
“We believe animals have died in the fires and it will take years for the moorland to return to normal.
“Fighting the fires also tied up resources that could have been needed elsewhere, in the process costing hundreds of thousands of pounds. That can’t go on.
“We aren’t trying to be killjoys – we want people to go out and enjoy our countryside and just to act responsibly. If they don’t then they could face action.”
The decision to implement the orders is being backed by the opposition Liberal Democrat group in Oldham.
Coun Garth Harkness, who represents Saddleworth North, called on drones to be used to enforce the orders.
“I worry that, now we are in summer, we are likely to see a further onset of moorland fires and so it is imperative that we maintain our vigilance and look to strengthen our powers in combating criminal activity,” he said.
“It represents one more legal tool to help combat the irresponsible firelighters on the moor or those who are downright criminal.
“I for one do not want to see another summer of our beautiful moorlands ablaze and the frightening prospect of a fatality.”
Signs will be put in place around the designated area to advertise the proposed orders.
The consultation period will run from July 8 to August 5 and councillors, stakeholders and residents will be able to submit comments on the proposals.