Over 70 new houses to be built across Oldham

More than 70 homes will be built across Oldham after three new housing developments were given the go-ahead by planning chiefs.

The council’s planning committee has unanimously approved a number of applications in different areas of the borough, including an old bowling green and a former church site.

And a new estate of affordable homes to be built on land off Cherry Lane in the rural area of Alt.

The 38-house development would be made up of two and three bed, two storey dwellings and would include 47 car parking spaces.

All of the dwellings would be for affordable rent.

The application by housing association First Choice Homes is for land that previously held houses, but which have now been cleared.

The plans for the housing development in Alt. Photo: Oldham council.

“The principle of development is well established. It will provided much needed 38 affordable rent properties within the locality,” he added.

First Choice would have to pay £50,000 towards open space contributions, and to the replanting and enhancement of woodland next to the site.

Committee chair Coun Peter Dean said: “This is a former housing site, and we’re actually very pleased that there are going to be more houses put up there.”

The committee also gave outline approval for up to 24 homes to be built on a former church site south of Oldham town centre.

It will see St Cuthbert’s Church on Tanners Fold demolished, with the 1.23 hectare site being redeveloped for housing.

Indicative designs (pictured below) suggest that the small estate would be a mix of semi-detached and mews rows, arranged in a new cul-de-sac. 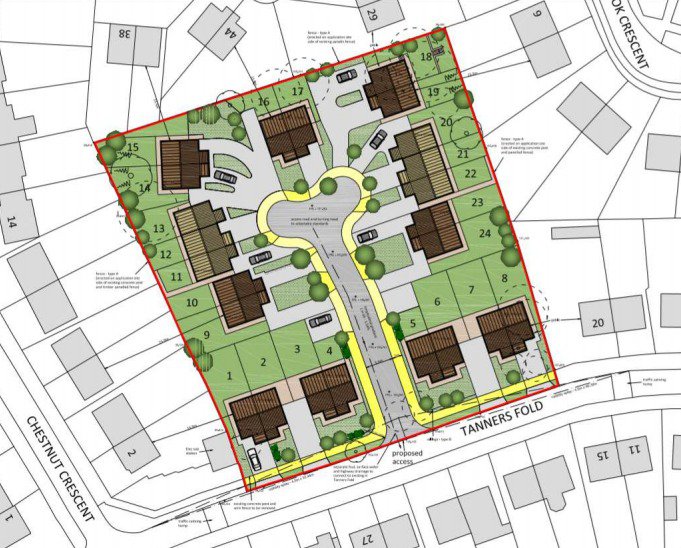 The church, which is ‘modern style’ and has an associated vicarage, has been vacant for several years.

Mr Dickman said: “Normally you think of a church in a more historic sense of being a building of some architectural merit but you can see that’s clearly not the case in this instance.”

Two objections had been received over the plans and the impact on neighbouring properties and roads.

Objector Susan Brennan told the meeting that there were also concerns about the drainage and sewers on the site, which had ‘lots of rats’ around the church currently.

“One of the residents is worried because I think she’s facing the site, and she’s worried about noise – she works nights. And in her words she says it’s going to be horrendous,” she added.

The plans for the redevelopment of St Cuthbert's church in Oldham. Photo: Oldham council.

Speaking on behalf of the applicant, the Diocese of Manchester, Stephen Dodgson said that a construction management plan would be created prior to building work starting.

“The site is privately owned and does not provide any physical amenity. Anyone entering the site at the moment will be trespassing,” he added.

“We would argue the derelict church and vicarage provides no benefit to the locality.”

Councillors voted to grant outline planning permission for the principle of redeveloping the site.

A reserved matters application, containing the details of how the new homes would look and the exact number, will now need to be submitted to the authority for consideration.

Across the borough in Shaw, ten three-bedroom houses are to be constructed at the former bowling green off Victoria Street and Farrow Street.

They would be split into either semi-detached dwellings, or blocks of three homes.

And six garages that are currently on the site in a block are to be demolished, with five new ones built in their place.

The plan had received four objections from residents, but was recommended for approval by planners.

The development would be served by a single access road with a turning facility within the site, which stopped being a bowling green in 2014.

Mr Dickman told the committee that there would be ‘adequate parking’ on the site itself.

The applicant, Clements Court Properties Ltd is required to make a financial contribution of £15,000 for open space provision.

The plans for the housing development in Alt. Credit: Oldham council.