Oldham gets millions of government cash for town centre projects 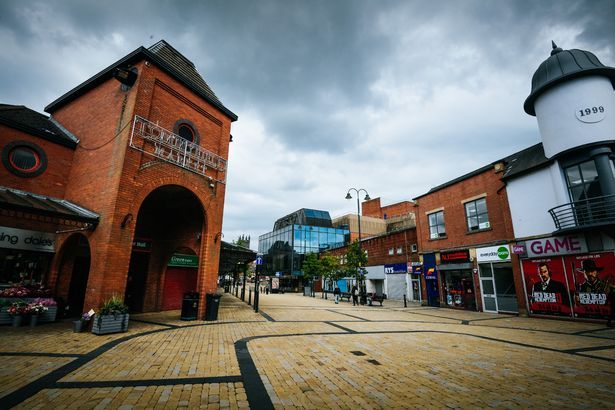 Outside Tommyfield Market in Oldham town centre. Photo with permission of MEN.

Oldham has been awarded more than £24m in government cash to fund four town centre regeneration projects, including the relocation of Tommyfield Market.

Secretary of State Robert Jenrick has announced that Oldham will be given £24.4m as one of the 30 towns which have been successful in bidding for money from the Towns Fund.

This will fund four schemes, the Northern Roots eco-park, a new live performance space in listed buildings on Union Street, funding the re-purposing of part of Spindles into office space, and relocating Tommyfield Market.

The council had bid for £41m from the government’s Towns Fund, but was awarded just under 60pc of what they had asked for.

The town hall are now looking at alternative routes to deliver a fifth project; a minewater heat network which could convert water from flooded coal mines into energy.

This would create an environmentally friendly power source for the town centre.

Council leader Arooj Shah said: “As Oldhamers we know our town has fantastic potential, and we are pleased that the government have endorsed our vision for the town centre.

“Oldham bid for a competitive £41m for five ambitious projects that will make the town centre a place that mixes retail, work, homes and leisure, and will help establish Oldham as the greenest borough in Greater Manchester. Securing funding for four out of five is a great result.

“These projects will not only boost regeneration, they will also create much-needed jobs, apprenticeships, training and opportunities to support our recovery from the pandemic as sustainably as possible.”

The Northern Roots project will see the creation of the UK’s largest urban farm and eco-park on 160 acres of ‘high quality green space for community use’ at Snipe Clough.

The Towns Fund cash will also be used to relocate Tommyfield Market from its current site on Albion Street into Spindles Town Square Shopping Centre.

Purchasing Spindles has also opened up an opportunity to use space within the shopping centre, such as the mezzanine floor to be repurposed to create additional office space for ‘enterprise development’.

A live performance space is also to be created by re-using listed buildings in Oldham’s cultural quarter.

The development will be based within a redeveloped Old Post Office and former Quaker Meeting House at 84 Union Street, and aspires to be a ‘net-zero carbon enterprise’.

The council says it will expand the existing performing arts offer in terms of scope, scale and quality and increase provision for participatory activities.

The bid was developed by the Town Deal Board which has been meeting virtually to develop Oldham’s town investment plan.

The £24.4m Towns Fund funding follows Oldham’s successful bid for £10.7 million from the Future High Streets Fund, which will support other regeneration projects including making the town centre more accessible for pedestrians and cyclists, the launch of a food hall in the Old Town Hall’s Egyptian Room and a new business hub for digital start-ups.

Peter Holbrook CBE, chair of Oldham Town Deal Board and chief executive of Social Enterprise UK, said: “We’re delighted to have received this funding which will realise the ambition for change in Oldham.

“The Town Deal Board is made up of private and public sector partners who all share a combined vision for Oldham to be a town where business and enterprise can thrive and where people want to live, visit, relax and work. The projects within our bid will help us to deliver that shared goal.

“We look forward to continuing to work together to bring the projects to life and help Oldham realise its potential.”