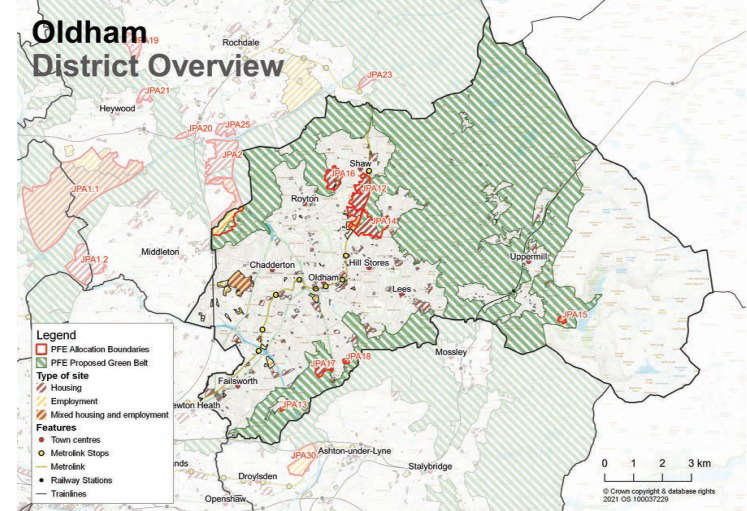 The Oldham District Overview in the Places for Everyone document. Photo: GMCA.

A majority of councillors in Oldham have voted to approve the region's new housebuilding masterplan, despite claims it is the 'ugly sister' of the Greater Manchester Spatial Framework.

At a special meeting of the full council, 37 members voted for the new Places for Everyone plan for the borough, with 16 councillors voting against.

Under the proposals, which are part of a joint plan with nine of the other Greater Manchester boroughs, eight sites in Oldham’s green belt would be earmarked for development.

It replaces the former Greater Manchester Spatial Framework (GMSF) which collapsed after Stockport voted not to go forward with the plan.

The Oldham allocation includes the Beal Valley site which is planned for 482 homes, and land at Broadbent Moss in which 874 homes will be delivered in the plan period up to 2037.

A further 465 homes are planned at Cowlishaw, and 150,000 sqm metres of employment space is listed for land at Stakehill.

Labour councillors said their hands were tied by Conservative house building targets and planning rules that meant they can’t force developers to build on brownfield land.

Cabinet member for housing, Councillor Hannah Roberts said: “I was, to be frank, horrified when I saw the first draft of the GMSF, no one in the Labour group wants to build on current green belt land and the proposals had to be changed.

“We were shocked to discover that the Conservative government had more than doubled Oldham’s local housing need figures, up to over 680 new homes to be delivered each and every year.

“The planning team scoured the borough to find every site possible to add to our land supply.

“We embarked on a mills strategy to find out which mills could be used for homes and added 800 brownfield sites. We identified over 2,000 sites for homes in the town centre.”

Coun Roberts added: “Places for Everyone will give our greenbelt the quickest protection.

“It provides a five year land supply across the nine boroughs removing the threat to our green belt and OPOL and will come into force at least a year before our local plan.

“It is a significant improvement on the first version of the GMSF. It is the better option for Oldham.

“Without Places for Everyone, everything is up for grabs.”

However moving an amended motion, which called for the council to opt not to sign up to Places for Everyone and instead do their own local alternative, Liberal Democrat group leader Howard Sykes said that Oldham ‘deserves better’.

“Labour members tonight will be attempting to sugar the poisoned pill of the plan,” he told the meeting.

“It remains our belief that the borough's housing needs can be met without irreparable and inevitable damage to our green belt.”

He said the plan would generate ‘civil strife in its wake’.

“Places for Everyone will not only destroy much of the green belt in my district but it represents a tsunami to our already creaking infrastructure,” Coun Sykes added.

“For us this makes the plan toxic. We still think we can do better than this.”

He was supported by Lib Dem Coun Sam Al-Hamdani who added: “We have improved on this plan before, we can improve on it again.”

Conservative group members also spoke out against the Places for Everyone proposals.

Saddleworth North ward Coun Luke Lancaster said: “We continue to have concerns with this rehashed GMSF.

“Whilst we welcome the reduction in green belt allocation for development we know that local people want to protect all their green spaces without exception.

“Green belt release should only be considered in exceptional circumstances.”

Tory group leader Graham Sheldon added: “The people of this borough are now quite fed up with the way this council ignores their wishes and pushes forward with any plans to please Mayor Burnham.”

However Labour member for Royton South, Coun Steve Bashforth hit back at the criticism from opposition groups.

“Conservative government policy is driving this. You need to know who your enemy is here,” he said.

The Places for Everyone plan will go out to an eight-week public consultation between August 9 and October 3.

Following the consultation, the plan would then be submitted to the Secretary of State for Housing, Communities and Local Government in January 2022.