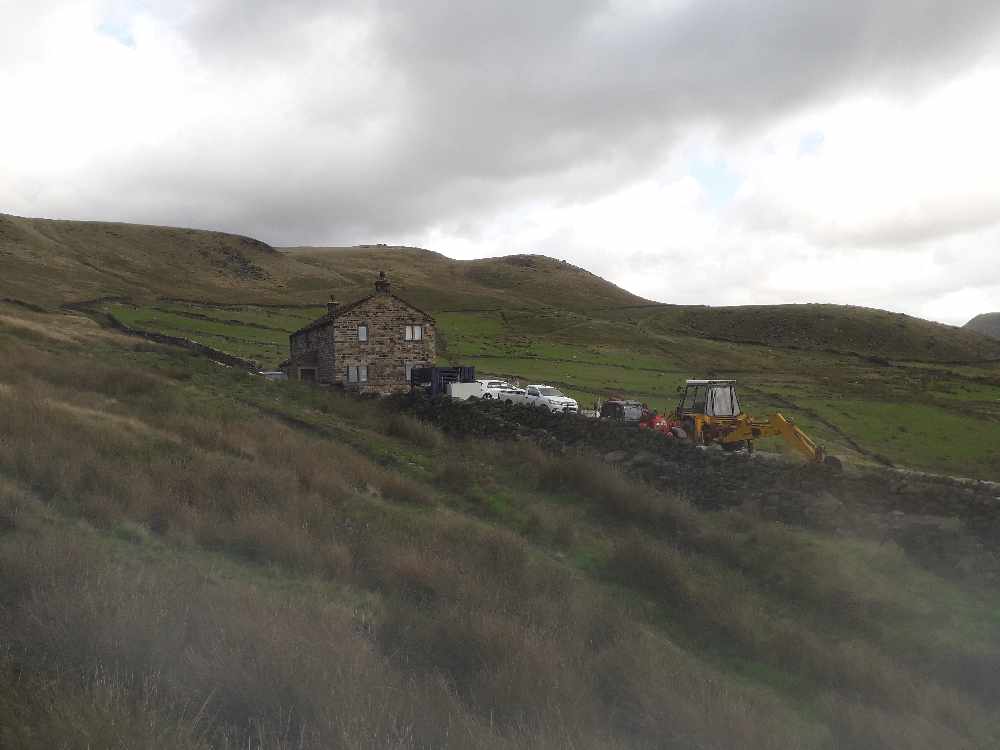 A couple living completely ‘off-grid’ in a remote farmhouse on the moors above Saddleworth have been denied permission to construct a utility building because it would be ‘harmful’ to the green belt.

Mr and Mrs Rigby had taken on the dilapidated Edge End Farm in Greenfield as a restoration project and ‘sympathetically’ converted it into a new dwelling.

The building, which is on White Brook Lane and sits below the local ‘Pots and Pans’ landmark, had been empty since the 1950s and was a ‘leap of faith’, Alaster Rigby told councillors.

They had now applied to build a new outbuilding which would function as a garage and shed, with a subterranean level for three water storage tanks and solar panels on the roof.

A diesel generator and snow moving equipment would also be stored there.

Mr Rigby explained that they are located half a kilometre from the nearest tarmac road and needed to make sure they had ‘absolute necessities’.

“Edge End is possibly the most isolated house in the area,” he said.

“We live completely off-grid with no mains utility services whatsoever. In order to achieve this, essential equipment is required – we just can’t do without it.

“When it snows we get ten foot drifts and when the moor was on fire it was a bit frightening as we only had 50 gallons of water.”

He added: “We’ve received a fantastic response to our sympathetic restoration of Edge End by local people.

“When you buy a place like that you’ve just got to take a leap of faith. It’s been empty since 1957 – it’s a beautiful spot and yes there’s been mountains of problems.

“And if you want to live in somewhere spectacular like that, that’s what you’ve got to do.”

Officers explained that the application was recommended for refusal because it amounted to unacceptable development in the green belt.

There is already a temporary storage container on site for the generator which does not have planning permission, the meeting was told.

Addressing the meeting, the case officer said that ‘inappropriate development’ in the green belt should only be approved in ‘very special circumstances’.

“No justification or appropriate special circumstances have been put forward to outweigh the harm on the green belt and as such the development in contrary to both our local plan and the national planning policies,” he added.

But Conservative Councillor John Hudson disagreed, telling officers: “I don’t remember a situation that has arisen where so many hundreds of people have contacted me saying this is ridiculous.

Lib Dem Coun Hazel Gloster said she knew from personal experience using a well as a water source year round was problematic when the pump froze during winter.

“You can look all over Saddleworth and see hundreds of derelict properties, this type of development needs to take place to make them habitable,” she added.

Saddleworth West and Lees Coun Stephen Hewitt said that it was ‘commendable’ that Mr Rigby was living off-grid amid a crisis of global warming.

But interim head of planning, Sean Hannaby added: “As it stands it’s unacceptable.”

The proposed new structure is 26ft long, and around a ‘third of the size’ of the actual house, he said.

“We’re not throwing the kitchen sink at this, we are cognisant of the location when assessing this.”

Four councillors – Coun Hudson, Gloster, Williamson and Hewitt – voted to approve the application, but the rest of the committee rejected it on officers’ advice.