New 65-home estate could be built in Shaw

A new estate of 65 homes could be built on industrial land in Shaw – and more than half of them would be affordable to allow people to 'get a foot onto the housing ladder'.

New proposals submitted to Oldham council would see two, three and four-bedroom houses constructed on brownfield and scrub land which was occupied until recently by P & D Northern Steels Ltd.

The company have since vacated the site and moved to another location within the borough to allow the proposed residential development to go ahead.

The site already has outline planning permission, but the reserved matters application submitted at the end of February would see a huge upturn in the number of affordable dwellings.

The access to the development would be taken directly from Moss Hey Street, and all the proposed homes would have a minimum of two car parking spaces.

Under the plans, by Mulbury Homes Ltd and Great Places Housing Group, 44 of the homes would be for affordable rent and affordable home ownership. 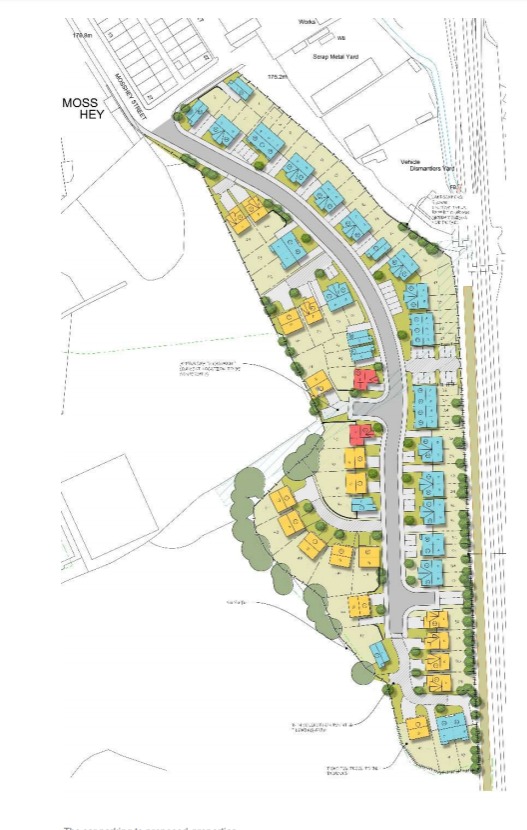 “Given that the majority of the homes are to be delivered as affordable it is considered to be a major social benefit and improvement from the outline application.”

The affordable rent homes would be capped at 80pc of the open market rent, and the remaining 21 houses would be marketed for outright sale.

According to the developers, earlier in the year there were around 400 applicants waiting for a two-bed home and 190 for a three-bed home in Shaw.

The scheme, which is being supported by a grant from Homes England, is forecast by developers to start on site in June this year, and complete in June 2023.

“The homes have been designed to be modern but also to be sensitive to the local context and be able to age gracefully,” the supporting statement adds.

“The proposals aim to make the most efficient use of land that is appropriate to the nature and setting of the site.

“The layout and urban form of the scheme is such that it supports crime prevention and community safety, with development clearly overlooking public spaces and streets.”

The plans are currently being considered by the council, with a final decision to be made by the planning committee at a public meeting.

The site which is planned for 65 homes in Shaw. Photo: Mulbury Homes Ltd and Great Places Housing Group.