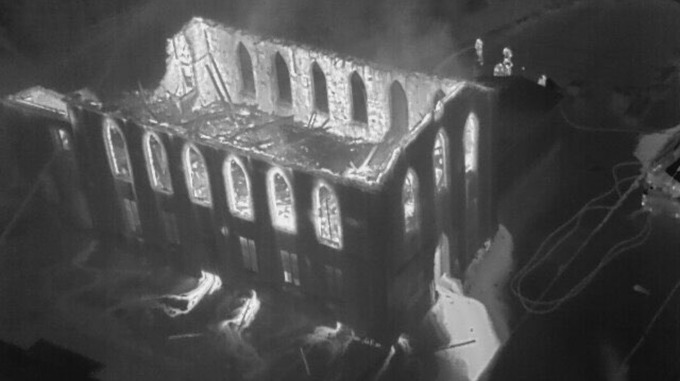 Fire fighters have been tackling a huge fire at a former church in Oldham.

It broke out at the building on Regent Street at just after 9pm on Tuesday evening (March 3).

Crews were called to the scene, with six fire engines and an aerial platform to tackle the blaze.

Greater Manchester Fire and Rescue Service (GMFRS) said at its height, the fire had consumed an area of 15 metres by 30 metres. An aerial platform was used to put water on the fire from above.

There are no reports of any injuries.

A number of roads were closed and residents living nearby were urged to avoid the area and to keep windows and doors shut.

At 7.30am this morning, GMFRS said: "Firefighters have worked through the night to tackle a large blaze on Regent Street in Oldham.

"Thanks to the hard work of crews, operations have been scaled down to one fire engine and one aerial appliance.

"Crews are currently using a thermal imaging camera to check for any hotspots and are damping down.

"A safety cordon remains in place and Regent Street and Beech Street closed. This has no impact on local Metrolink services."