Gender equality on the agenda at Oldham college 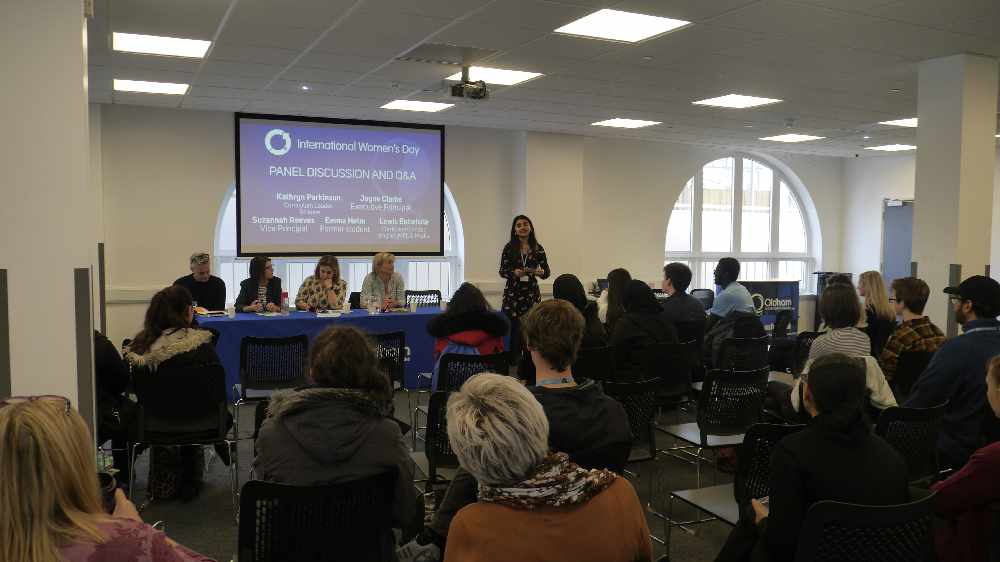 Oldham Sixth Form College held an event to focus on the careers of some of its most successful women and gender equality to mark International Women's Day recently.

It also gave students and staff the opportunity to ask questions about broader issues.

Last Thursday's event was chaired by Kashaf - an AS Level student who is studying History, Law, English Language and Sociology.

Kashaf said: "I’m excited about chairing this event as it’s a fantastic opportunity around a cause I’m passionate about. I’m part of the debating society and also plan to become a barrister in the future, so this is all great experience for me."

The audience, which had a mix of genders, were given the opportunity to find out about the panel members' successful careers and also ask questions about the importance of International Women's Day and conceptions and misconceptions of feminism.

During the lively discussion, the panel considered a broad range of issues - including the portrayal of women in the media, gender stereotypes, whether more can be done for women from minority groups and whether diversity or equality should be prioritised in recruitment processes, amongst many others.

In addition to their perspective as educators, panellists were able to add their own views as parents to the conversation. They explained how their own experiences had informed their views and passion about feminist issues and gender equality.

The panel collectively felt it was very important to hold events such as this to allow the opportunity to raise and discuss these complex issues, and to acknowledge that though strides have been made in our society with regard to gender equality, there is still much to do, both here and especially so in many other parts of the world. Discussions such as this can also highlight the layers of expectations that we often place on ourselves as women, in addition to those that society can place on us.

Ultimately, the panel felt that this is not just a women’s issue, but one that affects both men and women. As attitudes to gender equality continue to change and evolve, the college felt it was great that so many students engaged with this issue and participated vociferously in the discussion.