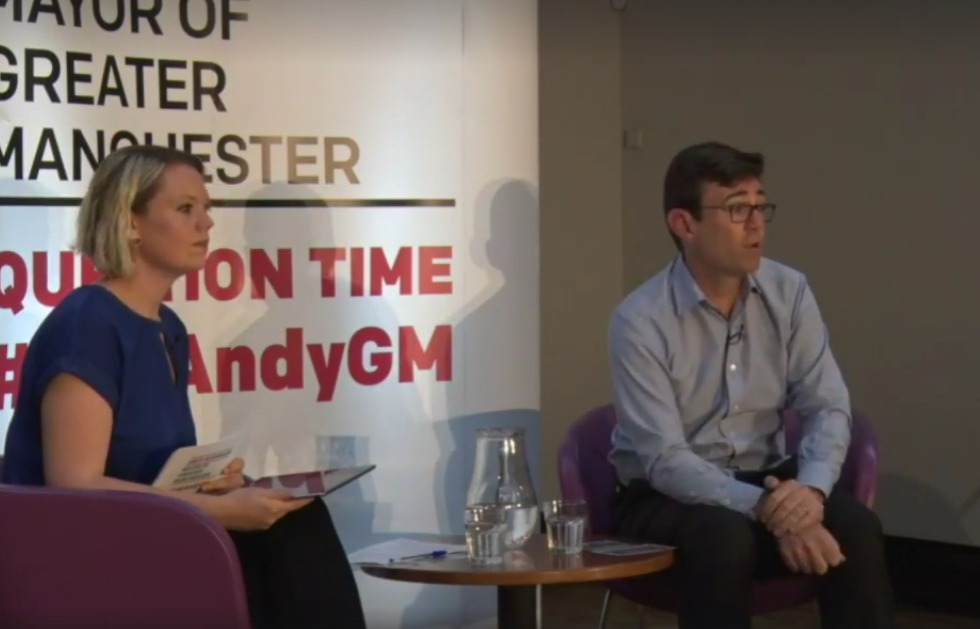 Greater Manchester Mayor Andy Burnham came to Rochdale to be grilled by members of the public on themes ranging from transport and crime to green belt loss and housing.

Held at the town’s historic Touchstones library he was facing an audience of 100 people – as well as those making contributions from social media – at the monthly Mayor’s Question Time event.
Having recently unveiled his vision of a transport network for Greater Manchester, including a de-regulated, London-style bus service, the question of getting around the borough  and beyond was high on the agenda.
And long-running issues, including the controversial Greater Manchester Spatial Framework (GMSF), crime, housing and social care were all given an airing – some more heatedly than others.
Here’s what we learned:
The Mayor is in no mood to back down to the bus companies
No sooner had Mr Burnham announced plans to move ahead with franchising Greater Manchester’s bus network than giant Stagecoach launched an attack on the proposals.
Backed by 15 other operators, the city’s biggest single bus company claimed the plan would leave taxpayers with a ‘massive bill’, arguing there was ‘no evidence’ it would bring improvements.
However, despite the furious response to the announcement, Mr Burnham had strong words of his own for his critics as he defended his vision in Rochdale.
He said: “I see the bus operators coming out this week and attacking me. Well, they can attack me if they want but would it not be better for them to say ‘here’s what we’re going to do to make it better, here’s why we don’t need to go down this path because we are going to change things’.
“They are not saying that, it’s a quite negative thing to come back and attack me and say they are going to sue me.”
He added: “Are they really saying the status quo is good enough.”
Following a question from Michael Ganley about the lack of a direct buses from Hopwood to Manchester, Mr Burnham had set out the benefits of a franchised, London-style system.
“Effectively that means rather than being told where the operators want to go we can say no, this is where we want services to go,” he said.
However he stressed that, while the recommendation from Transport for Greater Manchester (TfGM) was ‘clear’, the decision was not final and a process now had to be followed.
College-age youngsters are his ‘priority’ when it comes to transport
Free bus passes for those aged between 16 and 18 are due to be rolled out from September.
Dubbed ‘Our Pass’,  the Mayor hopes it will remove barriers and open up opportunities for youngsters, particularly those from disadvantaged backgrounds or more remote parts of the conurbation.
However there were questions on the night as to why the 16 to 18 age group had been targeted, while other groups – including secondary school children and disabled people with carers – also struggled to afford fares.
Mr Burnham said if he could help everybody he would, but did not have the budget to do it.
He said: “It’s a question of priorities. I think this age group, when you’re leaving secondary school, is a crucial moment in your life; where you are making a choice about which apprenticeship or what college to go to. And I think at that point people most need the help.”
However, responding to a question from Jonathan Fletcher via Facebook, he guaranteed his transport plans would include a bus service ‘fully accessible’ to all disabled people – including wheelchair spaces and talking buses.
“As we reform this transport we should have the highest standards of disability access,” he said.
There will be no congestion charge on his watch
The Mayor ruled out the possibility of bringing in a congestion charge as a way of incentivising people to use public transport on the scale seen in London.
Responding to a question from the floor, he said there would be no possibility of reversing the 2008 vote, or returning to the policy.
He said: “People voted heavily against it, let’s get to the reason people voted heavily against it.
“Public transport across large parts of Greater Manchester is not sufficiently reliable or affordable or, in many ways, even available to some people.
“It’s not a viable alternative. It’s very hard to hit people with a tax for using their car when they have no alternative, which means they can’t escape that tax.”
However he said that other schemes were a possibility, including a workplace parking levy, as in Nottingham.
Rochdale will see extra police officers on its streets – and its trams-  this year
Mr Burnham said that an additional four neighbourhood beat officers would be recruited for Rochdale this financial year – in addition to the four which were recruited over the previous 12 months.
“It may not sound a great deal but at least it’s going up again, as opposed to where it was going for the seven or eight years from 2010,” he said.
He added that the decision to raise the council tax policing precept had ‘not been easy’ but was taken to recruit an extra 320 police officers across Greater Manchester – from which Rochdale would benefit.
And Deputy Chief Constable Ian Billings stepped in to address concerns about specific crime and anti-social behaviour on the Rochdale to Oldham Metrolink line.
He told the audience that it had become clear that policing the Metrolink was not a job for the 50 PCSOs who had been deployed two years ago – and these would now be replaced by 50 police officers.
“The Metrolink needed some harder enforcement, we wanted people arrested basically,” he said.
The officers are expected to be on the trams from the autumn.

Some people are still very angry about the Greater Manchester Spatial Framework
The region’s twenty-year development blueprint appears to be as controversial as ever.
Mr Burnham told the audience that local leaders were ‘listening carefully’ to the responses from the latest round of consultation, which ended in March.
“We’re trying to find the right balance. We want to minimise the green belt-take as much as possibly can, while still meeting the pressure to build homes.” he said
Asked why a lot of houses proposed for the green belt were of the ‘high end, executive’ type, Mr Burnham said there was a need to create a mix of housing across the region.
And he told the audience he was keen to get away from ‘building for the car’ by developing on greenfield sites near roads – and wanted to see far more homes built in town centres.
However Pennines resident Daniel Ames told him that was ‘not happening’ in Rochdale,  with areas such as Littleborough, Wardle and Milnrow being earmarked for executive homes in the green belt.
He claimed there were plenty of buildings in the town centre that could ‘very easily’ be converted into accommodation – and accused Mr Burnham of ‘talking nonsense’ and ‘knowing very little’ about Rochdale.
He also questioned the number and type of homes being proposed, telling Mr Burnham he was ‘too city centre focused’.
Mr Burnham said he understood Mr Ames frustration – and would be challenging all boroughs to look once again at their plans –  but that there was ‘no getting away’ from the fact more homes were needed.
“It’s a hard job to do, we can’t please everybody we are just trying our best to get the best possible plan we can,” he said.