Five jailed for roles in Oldham class A conspiracy 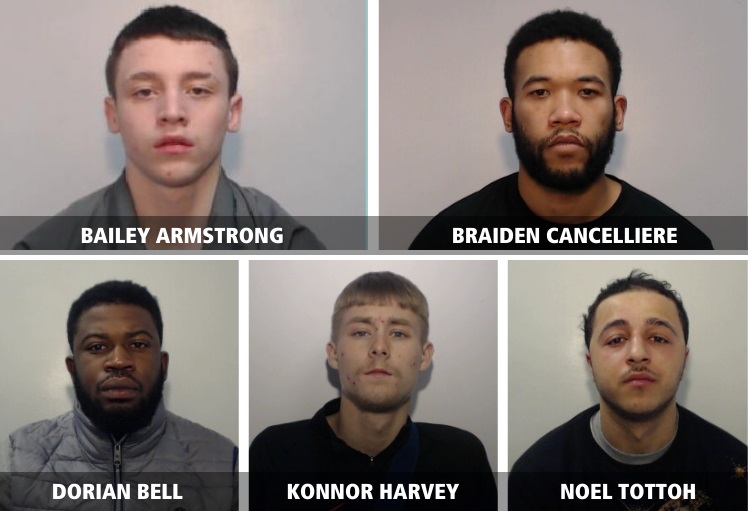 Five men from Oldham have been sentenced to a total of over 25 years for their roles in a class A drugs conspiracy.

All seven conspirators were sentenced at Manchester Minshull Street Crown Court on Wednesday (23 December) after previously pleading guilty to an array of drug offences.

The verdicts conclude Operation Angela - a two-year operation led by officers from GMP's Oldham Challenger team, who uncovered £24,000 worth of class A and B drugs - namely cocaine, crack cocaine, heroin and ecstasy - and £11,500 in cash.

The following were sentenced yesterday after pleading guilty to conspiracy to supply class A drugs:

- Dorian Bell, 24, of Wilson Way, was sentenced to nine years;

- Noel Tottoh, 22, of Princess Road, was sentenced to four years and ten months;

- Konnor Harvey, 20, of Meadowcroft Lane, was sentenced to five years and 11 months;

- Bailey Armstrong, 18, of Cornhill Street, was sentenced to two years and six months.

The court heard how over a period between May 2018 and January 2020 the group’s criminal enterprise – spearheaded by Dorian Bell alongside his 'loyal and trusted workers' – operated in the supply of heroin and cocaine.

Bell used close associates Tottoh, Harvey, and Armstrong - as well as Zoe Garratt who was given a suspended sentence - in a coercive and controlling manner to help operate his dealing and, despite being arrested on three occasions, Bell continued to offend before the conspiracy was fully unravelled by Op Angela at the start of 2020.

It was also described in court how Cancelliere wasn’t directly involved in the conspiracy but his property was rented out in his name as a 'safe house' for drugs.

Officers working on Op Angela collated evidence from the summer of 2018 onwards, including mobile phones, drugs and cash.

Initial evidence was seized following unrelated incidents, such as cars being abandoned and vehicle stops by patrolling officers.

On Saturday 27 July 2019, officers observed a VW Golf being driven suspiciously by Bell. After activating their emergency equipment, the officers quickly abandoned the pursuit due to the level of dangerous driving from the VW.

A short time later, the officers came across the VW abandoned on Miller Road and, after further inspection, found various drugs, mobile phones, and knives.

Over time, enough intelligence had been submitted to lead officers to relevant addresses that were housing large quantities of drugs and cash and detectives were able to begin constructing a compelling case that would ultimately convict the five men.

All the perpetrators involved were arrested by Wednesday 12 February, when Harvey and Armstrong were taken into custody by police.

After being arrested and charged, all five men pleaded guilty and have been sentenced to a total of 25 years and nine months.

Detective Constable Andy Pearson, from GMP's Oldham Challenger Team, said: "These are really significant results as Bell and his accomplices operated a damaging criminal enterprise which inflicted a life of misery on those coerced in the conspiracy and those at the end of the chain taking the drugs, alike.

"Bell was driven by his own greed and selfishness to recruit vulnerable and naïve young men to take part in his pernicious trade, and he is now behind bars for a long time to consider the impact of his actions on those in the community that have been affected by this.

"Bell's fellow conspirators were heavily-involved in this trade, and Cancelliere was complicit in providing the men with a place to store drugs and money to help the conspiracy function - it is so important to the streets of Oldham that these men are now locked up for their criminality.

"I urge members of the community with suspicions or concerns to contact their local Challenger team, or Crimestoppers anonymously. We can continue to seriously tackle organised crime in our communities together if we get the information we need, no matter how insignificant that report may seem at the time."

Anyone with concerns or information about serious and organised crime in Oldham can contact the Challenger team on 101. Details can be passed anonymously to the independent charity Crimestoppers on 0800 555 111.