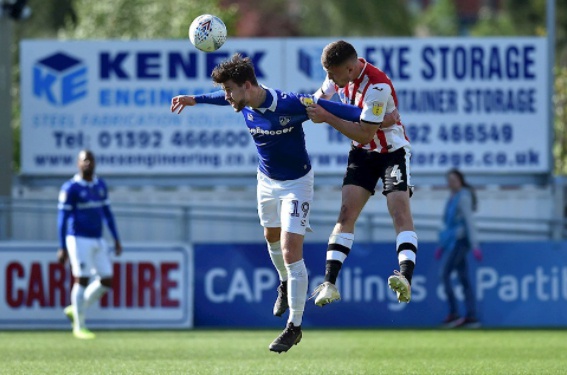 Oldham’s play-off hopes ended after falling to a 1-0 defeat at Exeter City.

More than 600 supporters made the long trip south, though it proved to be in vain as Ryan Bowman headed home with ten minutes remaining to seal all three points and keep the Grecians' play-off hopes alive.

In an entertaining game at St James’ Park, Latics almost went in front in the early stages through Chris Missilou. However, Exeter goalkeeper Christy Pym reacted well to the shot and denied Oldham an opener.

In an end-to-end game, Mohamed Maouche tried his luck from distance but forced another good save from Pym, before Exeter substitute Hiram Boateng hit the post from two yards out in the early stages of the second half.

The hosts began to rack up the pressure and their efforts were rewarded in the 79thminute. Randell Williams had his header brilliantly saved by La Paz, but Bowman was on hand to head home from close range to secure a vital three points.

Following the result, Wild spoke of his disappointment in the way his side played.  "I thought first half we played well and were the better team against the wind.”

“The keeper's pulled up two or three good saves, but second half we couldn't back that up with the wind.

“Maybe people went missing, people didn't get on the ball and we didn't play through enough.

“For as good as we were first half, we were very disappointing second half.”

Oldham return to action on Tuesday night with a trip to Newport County.