Dozens of footbridges hit by flooding to be fixed 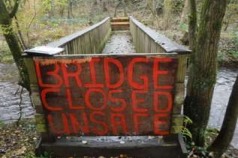 Dozens of footbridges which have been completely washed away or damaged by flooding are to be replaced and repaired in Oldham.

Bosses have agreed that ‘urgent works’ should take place to walkways, footpaths and bridges hit by recent floods to the tune of £725k.

This includes the important link road Salmon Fields (pictured below) which links Shaw Road and Higginshaw Lane in Royton.

It has been forced to close as a result of severe flooding several times last year and was raised as a ‘serious problem’ by ward councillor Steven Bashforth. 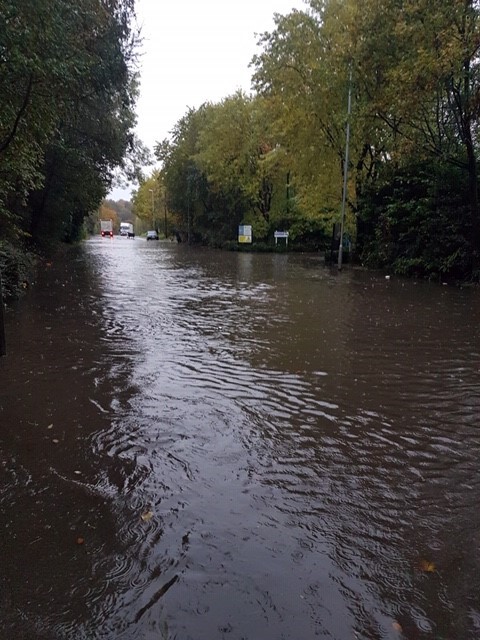 The town report states that ‘water emanates from near to the public footpath from a culvert and blocks up the road gullies every time it rains’.

The cause of the flooding is the culvert on the public footpath and it causes a ‘constant hazard on the carriageway’, officers say.

And ‘vehicular accidents have occurred due to the flood water’, the report adds.

Construction work to solve the problem will be split into two stages, where first the culvert will be piped into a new pipeline to connect into the existing system.

Secondly a ditch, also known as a ‘swale’ is to be excavated to provide an extra relief channel alongside the footpath which will connect to a filter bed which will discharge into the existing surface water sewer system.

Brookdale Footbridge Bridge in between Dobcross and Uppermill is currently closed to the public as it shows ‘visual signs of distrotion’ and moves significantly when used.

Bosses intend to spent £98,472 to remove and replace the three main timber beams, replace the rotten footway timbers and re-fix the handrails to get it back open again.

And Medlock Vale footbridge ‘number two’ in Daisy Nook Country Park has completely washed away and is due to be fully replaced, at a cost of around £54,648.

The retaining wall at the end of Phillimore Street in Lees is ‘showing signs of failure’ after anti-social behaviour in the form of ‘youth’ scaling the parapet and jumping below onto shipping container and old garage at edge of Leesfield Cemetery.

Officers say this has led to damage to the parapet, and the plan is to remove the shipping container and demolish the garage, raise the height of the cemetery side of the wall and reconstruct the entire wall and parapet.

It is estimated that these works will cost in the region of £54k.

Pitses footbridge, in between Pitses and Holts, is to be repaired and have its handrail replaced, which along with other works will cost £35,200.

Medlock Park footbridge at Greenacres has been swept downstream by 25 metres, according to the report. It is planned to fully replace the desk timbers and end supports, and remove the previous deck from the river.

In Springhead, Brooklet Close footbridge is to be repaired and have its south abutment rebuilt, along with a ‘training wall’ and embankment to make sure water goes along the correct course.

Woodend footbridge at Wood End in Crompton is to have defective timbers replaced, and Covert footbridge in between Holts and Pitses is to have new handrails to replace ‘worn’ sections.

Holy Trinity footbridge by Dobcross is to have missing brickwork replaced, and a non-slip surface put in place as it is in the grounds of a primary school and is ‘frequently used by small children’.

Knowles Lane footbridge in Springhead is also to have its footway timbers fully replaced at a cost of £53,328.

Other footbridges that are to be repaired include: