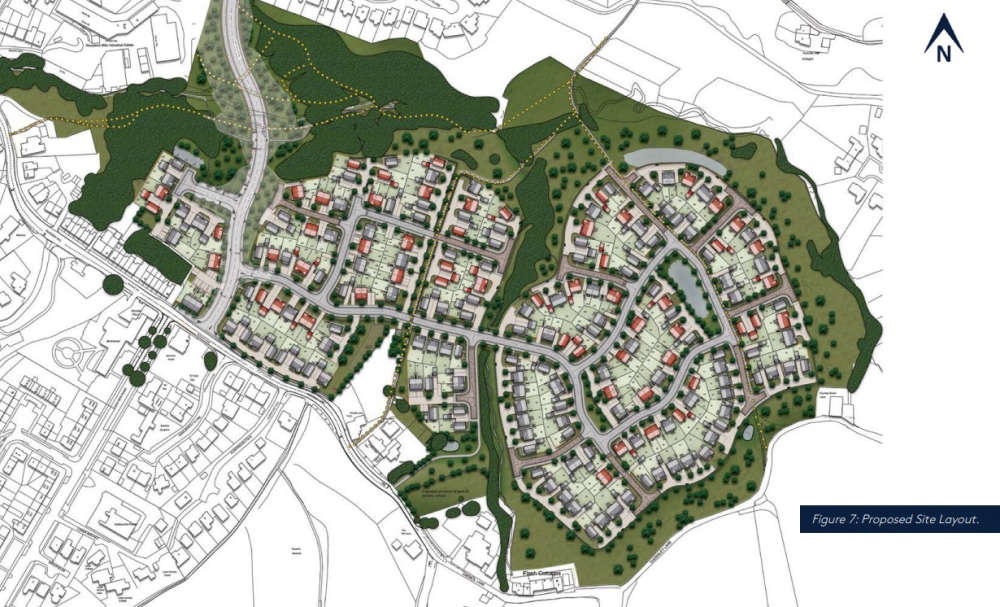 The indicative layout for the development at Knowls Lane in Springhead. Photo: Russell Homes.

Controversial plans for more than 200 homes in the Saddleworth countryside have been lodged.

Proposals to build a £3 million road and up to 265 homes on land in Springhead were first refused in November 2018 but subsequently given approval in July 2019.

A local campaign group Save Our Valleys had raised more than £50,000 to launch a legal challenge against the decision but a judge ruled against their bid for a judicial review in December last year.

The road was given full planning approval two years ago, but the homes element of the plan for the Knowls Lane site requires further detailed permission.

Developer Russell Homes has now applied to the council for reserved matters permission for 234 homes to be built on the site.

These are proposed to be split between five, four, three and two bed houses, which would be a mix of detached and semi-detached.

Around 22pc of the new housing estate would be ‘affordable’ under the criteria agreed with the council back in 2019.

An area of land has been reserved for the provision of a primary school as agreed under the terms of the original Section 106 agreement and a new play area is also proposed to be built within the site.

Access to the site would be provided from the new link road.with public rights of way being retained although these may be ‘slightly altered alignments’ in some cases.

Up to 12.67 acres of ‘new and enhanced public space’ would be provided as part of the development. 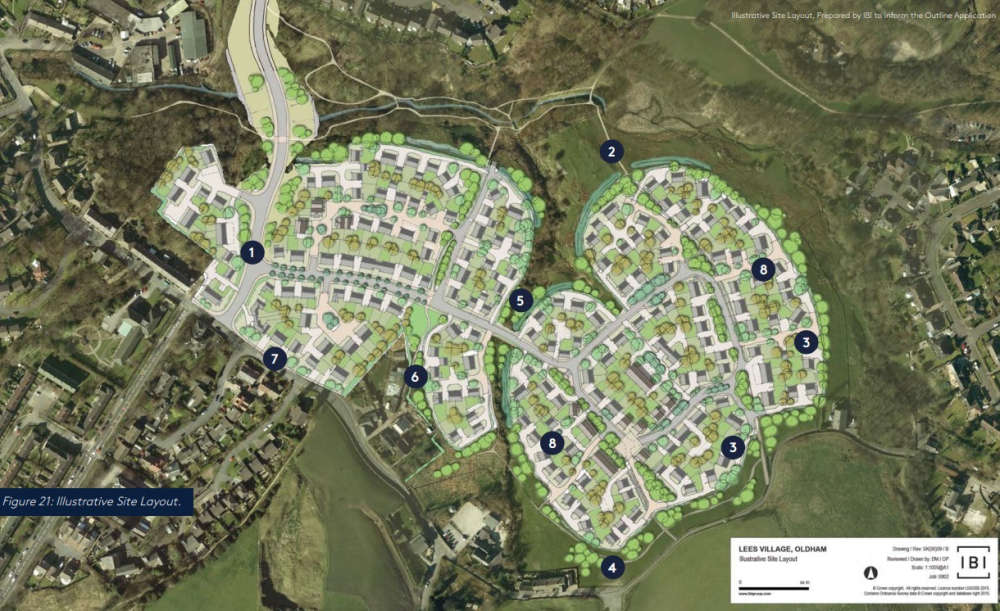 The indicative layout for the development at Knowls Lane in Springhead. Photo: Russell Homes.

The landscape around Thornley Brook would be retained within an ‘enhanced ecology corridor’, according to the plans.

“The close relationship that the site has with swathe of mature woodland that flanks Thornley Brook together with the mature tree belts which are found within the site provides an opportunity to create a development with a strong parkland characteristic, integrated and connected to the existing green infrastructure assets found within the local area,” the design report on behalf of Russell Homes states.

“The development will deliver a high quality, well-balanced residential scheme, set within an attractive landscaped setting, and will support, encourage, and enrich the community.

“The proposal will contribute to local housing needs, create new and improved pedestrian links, areas for formal and informal play, and enhance the ecological value of the site to create a distinct sense of place.

“Furthermore, the proposals will complement, enhance, and interact with existing site features, creating a development which harmoniously fits within its’ surroundings.”

There have been six objections submitted by members of the public so far to the application.

One objector states: “This is very detrimental for the local wildlife and also the loss of a natural beauty spot with ancient woodland.

“I am 53 years old and have grown up in the area of Springhead and so have seen the changes over the past 50 years.

“From green fields and open spaces to what now must be the most built up area in Saddleworth. There will be no green spaces left soon for the local people to enjoy.

“Also, I don’t think we have the infrastructure either to support the extra people.

“The roads are bad already with traffic and I think the local GP services and schools are feeling the strain as well.”

Consultation on the plans runs until the end of November.