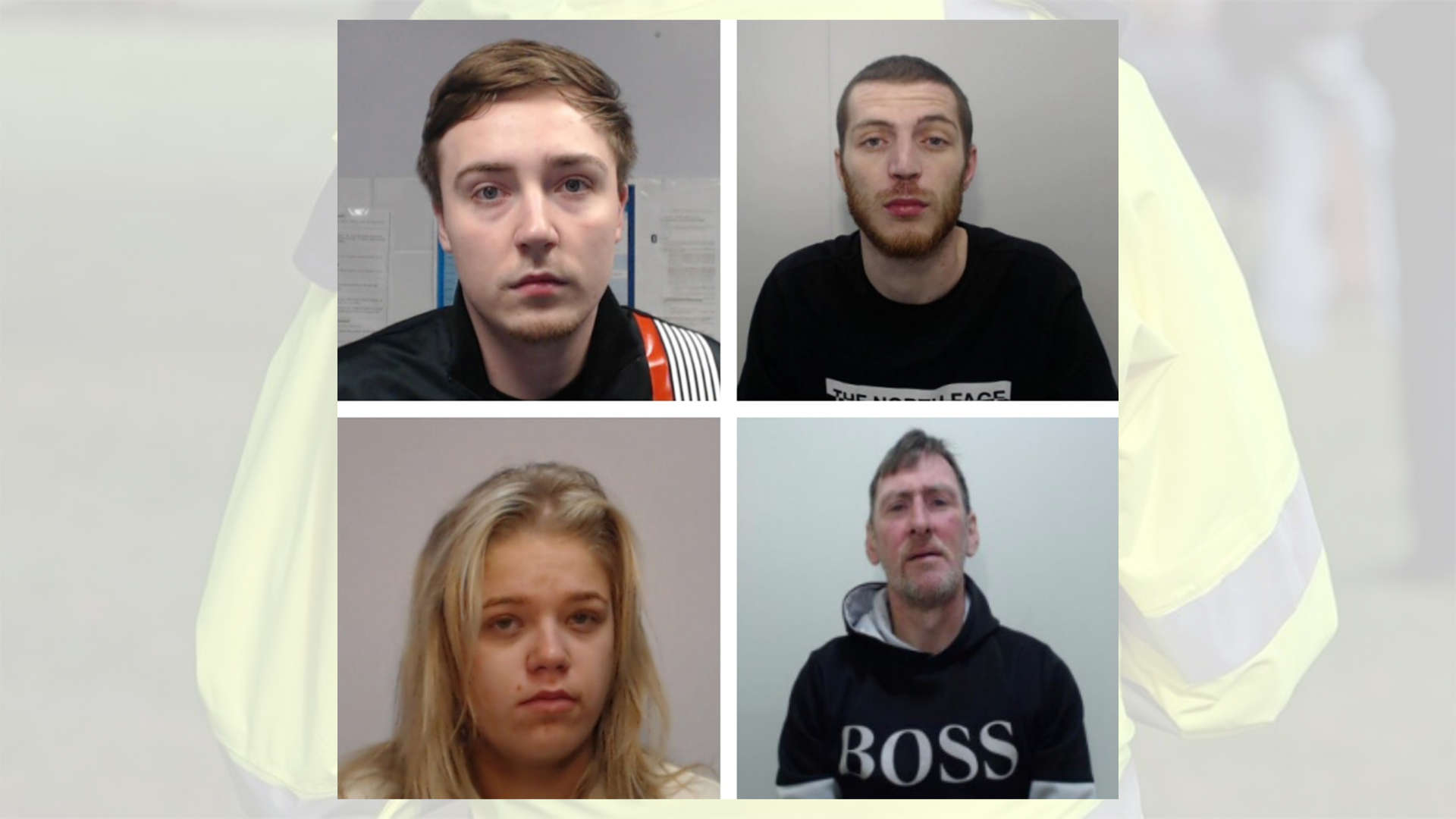 Left to right: Top - Smedley & Halford; Bottom - Leigh & Potter, who have all been jailed.

Five members of a serious and organised crime group that trafficked class A drugs between Greater Manchester and North Yorkshire have been jailed for a total of 25 years.

A total of five men and three women from Manchester, Oldham and York were sentenced on Thursday (14 October) at Manchester Crown Court after an 18-month investigation led by detectives in GMP Oldham's Challenger team.

The gang's cross-Pennine conspiracy was rumbled by a dedicated GMP operation - codenamed Homestead - which was supported by North Yorkshire Police and the Yorkshire and Humber Regional Organised Crime Unit.

Detectives uncovered how the group referred to the drugs line as the 'Junior Line' in the midst of their offending between April and June last year, and investigators believe vulnerable people, including children, were used to store drugs at 'cuckooed' addresses in York.

GMP say a 'considerable amount' of Class A drugs are estimated to have been supplied by the offenders to the streets of Greater Manchester, North Yorkshire, and beyond and two children were safeguarded with the support of relevant local authorities during the course of the investigation.

Officers started in May 2020 to piece together a picture of the group's offending before executing a strike-day sting on their addresses on 1 October 2020 when ten properties in Manchester, Oldham, Tameside and York were targeted, and charges were authorised later that day.

The court heard how Jack Smedley, 24, from Moston, controlled the supply of class A drugs - namely heroin and crack cocaine - for the rest of the group to disseminate to couriers utilising the road and rail networks to transport the drugs.

He was one of four men convicted of conspiracy to supply class A drugs alongside Daniel Halford, 26, Simon Potter, 49, and Marc Simpson, 55 - who all pleaded guilty to the offence.

Smedley, of Heppleton Road, will now serve 13 years behind bars after receiving a four-and-a-half year additional sentence to the eight-and-a-half years imprisonment he was ordered to serve in April earlier this year for further supply of class A drugs to York.

Halford, of HMP Forest Bank, was given three years for conspiracy to supply Class A drugs, Potter, of Leicester Way, York, was jailed for two years and 10 months, and Simpson, of Wilberforce Avenue, York, will spend two years in prison.

Georgia Leigh, 23, of Bowling Green Close, Oldham, was also sentenced to four years and two months for conspiracy to supply class A drugs - including 10 months for conveying 'List A' articles into prison, class A drugs, mobile phones cannabis and tobacco.

Nicole Crighton, 22, of Wilson Way, Oldham, was found to be concerned in the supply of class A drugs and was sentenced to two years suspended for two years, including 150 hours unpaid work.

Simon Davies, Michelle Simpson - both 48 - were convicted for participating in the activities of an organised crime group.

Michelle Simpson, of Wilberforce Avenue, York, was given a two-year community order, nine months of rehab and 20 days unpaid work.

Stephanie Beard, 27, of Dumfries Avenue, Oldham - a GMP civilian worker in the administration department - also pleaded guilty to possession of a controlled drug and was given a two-year conditional discharge in August 2021.

She has remained suspended since September 2020 pending an upcoming misconduct hearing.

Detective Constable Chris Brown, of GMP Oldham's Challenger team, said: "Today's verdicts bring to an end what has been a wide-ranging and complex investigation into the trafficking of large amounts of drugs between Greater Manchester and North Yorkshire.

"County lines offending is a serious issue that is being tackled across the country between forces and partner agencies to target offenders, take drugs off the streets, and to safeguard victims of exploitation.

"We believe that vulnerable people were preyed upon to facilitate this conspiracy here and we have ensured that children as young as 16, as well as vulnerable adults, have been safeguarded from future exploitation.

"This is in addition to putting five people behind bars and taking significant amounts of class A drugs from circulation on the streets of our two counties across the Pennines and possibly beyond there too.

"I'd like to thank all the detectives, officers, local agencies and policing partners from North Yorkshire for their dedication and support during the course of this investigation over the course of the last 18 months for helping to take some serious offenders out of our communities."

North Yorkshire Police’s Detective Inspector Michelle Falkingham, of York CID, added: “The outcome of this case highlights why cross-border working with other forces is vital when it comes to dismantling county lines drug gangs.

"This gang brought violence and misery to our city and it is good to see justice catching up with them.

"The case comes in the wake of a similar operation by North Yorkshire Police linked to the Junior line that brought 10 suspects to justice, including Smedley, who was jailed for eight years earlier this year. My thanks go to everyone involved.”