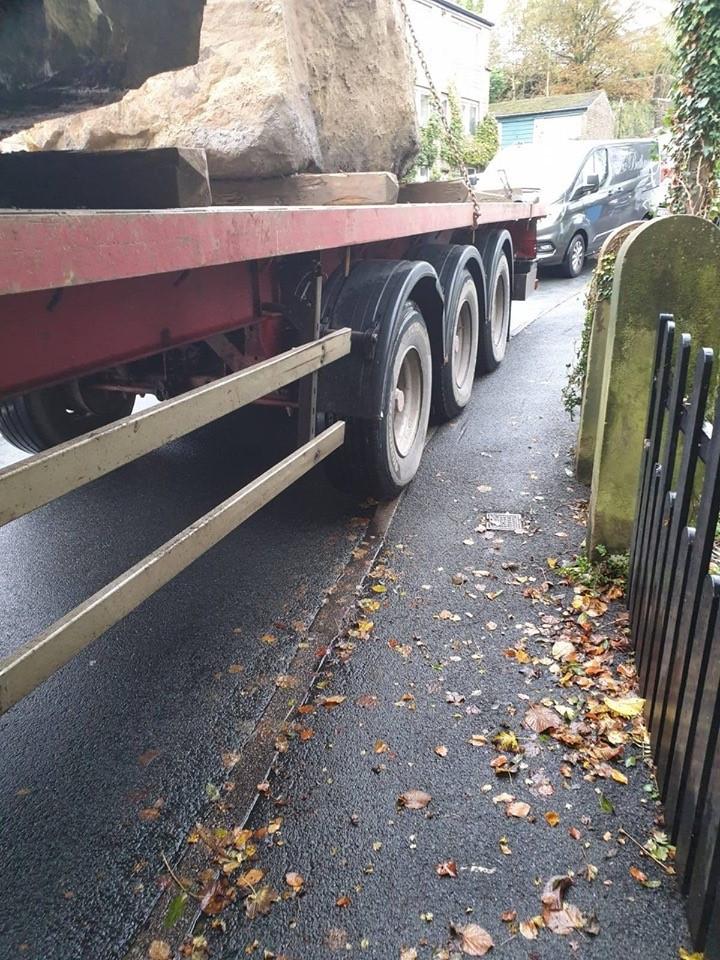 A community spirited father-of-three has reported a lorry mounting a pavement at a narrow bridge during a school run.

Posting on social media, he said: “This happened during the school run this morning, just as children were heading over the narrow bridge. I’ve reported the incident online to the council.”

Jayne Gibson, the mother leading a campaign to highlight traffic and safety concerns at the bridge,  said: “This was an incredibly close call for Mark.

“He knows the route as he walks it daily with his three children and so he will have been being vigilant and moved out of the way.

“But why a person walking on a footpath should be moving to avoid being hit by a lorry carrying a load is beyond belief.”

In the meantime, villagers have been busy signing two petitions; one for the 20mph default speed limit and one to ask the council to make the narrow, exposed footpath on the bend opposite Ladcastle Road safer.

And Oldham Council have monitored the traffic crossing the bridge and are considering potential solutions to address the narrow, exposed footpath, subject to funding.

Separately, but to complement the locals campaign, residents are also lobbying OMBC’s Overview and Scrutiny Board to ask them to review the council’s 20mph and general road speed policies.

This is to ensure they are fit for purpose and reflect up to date national and international road safety guidance.

And Mrs Gibson’s team are asking local residents to remain vigilant and stay safe when out and about.

This is because the traffic is noticeably heavier due to the diversion, and they should continue to report any road safety incidents e.g. speeding, pavement obstructions, near misses or crashes, dangerous driving, via the form on the OMBC website at: https://www.oldham.gov.uk/forms/form/601/en/road_safety?fbclid=IwAR2muNRa_Bo_38QDl3yGTKJ0OR2X3I1Po4o_zgYGkeSfKODaorpWeV44TeI.