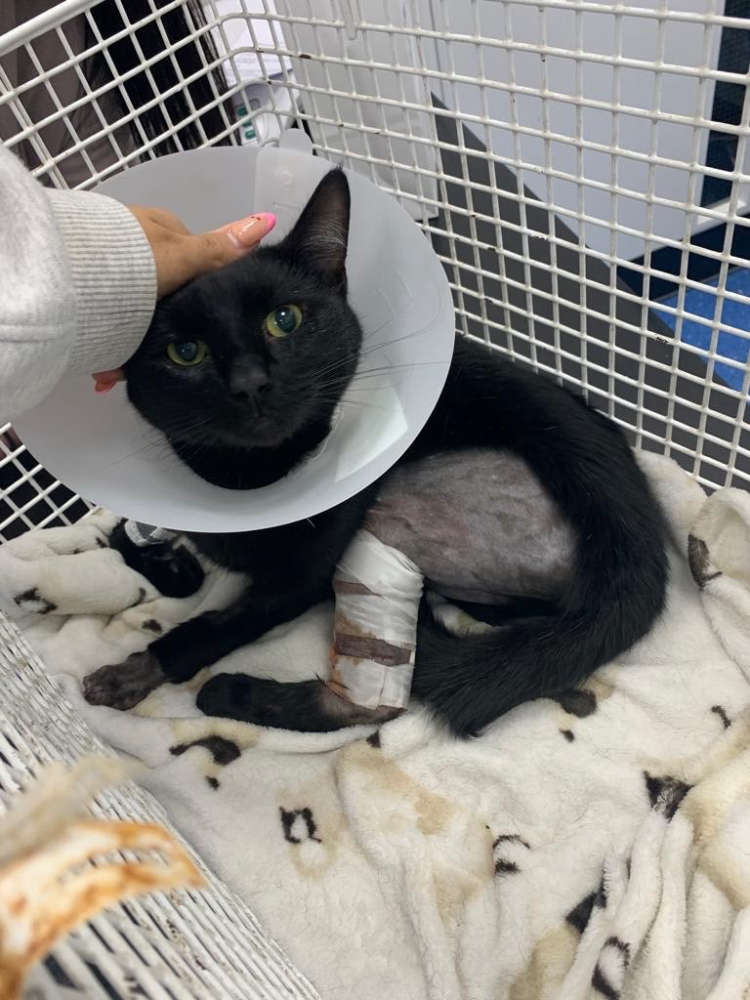 Police are investigating after a distraught mother discovered her pet cat had been deliberately shot at.

Jinx, a 20-month-old kitten which belongs to Meg Snape, was severely wounded on Thursday 21 July after the attack near his home at Dovestone Reservoir, Greenfield.

Jinx was left with shattered bone fragments, pins inserted into his left back leg and a toe on his front left paw amputated after the attack.

Now mother-of-two Meg, who lives in a cottage at HeyTop, has spent nearly all her £4,000 pet insurance money on veterinary fees to save her pet.

She said: “My insurance won’t cover all the aftercare, medication and further operation to remove all the pins. I’m mortified and don’t know what to do…”

Recapping the night of attack, she said: “I was worried I hadn’t seen Jinx for his evening feed. At 11pm I went outside and saw he looked scared, and knew something wasn’t right.

“He literally fell into the house then limped and hopped slowly up stairs. Half his fur was matted with grit, sand and soil and I could see he had wounds.

“A veterinary examination revealed the kitten had been shot with a shotgun and three of his legs were damaged and bearings lodged in them.

“I was in shock and broke down,” said Meg. “The vet removed two of the four bearings - gave one to me to show police and kept one at the surgery.

“The police were notified and attended Hey Top on Sunday 24 July. They confirmed it was a shotgun used and told me there had been other reports of shotguns being fired in and around the Oldham area.

“And a local farmer discovered they had been the victims of poachers on that fateful day.

“The vet has said it looked like the shooting was done on purpose as it was a low shot and Jinx’s injuries looked like he was running away at the time.”

She added: “As a family, it has overwhelmed us. We feel broken and cannot understand how someone could do this.

“Dovestones was our safe haven list but to think there are dangerous and cruel individuals out there is frightening. My head is completely all over the place.”

“The nursing team and I were shocked when a round metal object was seen on the first x-ray, given this and how comminuted (broken into lots of small pieces) the fracture was, we could only conclude he had been shot,” he said.

“We were saddened to see further radiographs showed two more broken bones and three more pellets of lead shot in his lower limbs. Ms Snape was devastated when I told her what we had found.

“Jinx is in good spirits and his fracture has been stabilised, hopefully it’s just a matter of time now for him to heal. There can, however, still be complications and it is a long recovery.”

Mr Ayres added: “It can be very upsetting when a pet is injured or ill, but more so when someone has deliberately caused a beloved member of the family to suffer so unnecessarily.”

You can support Megan at her GoFundMe link: https://gofund.me/7820f31a