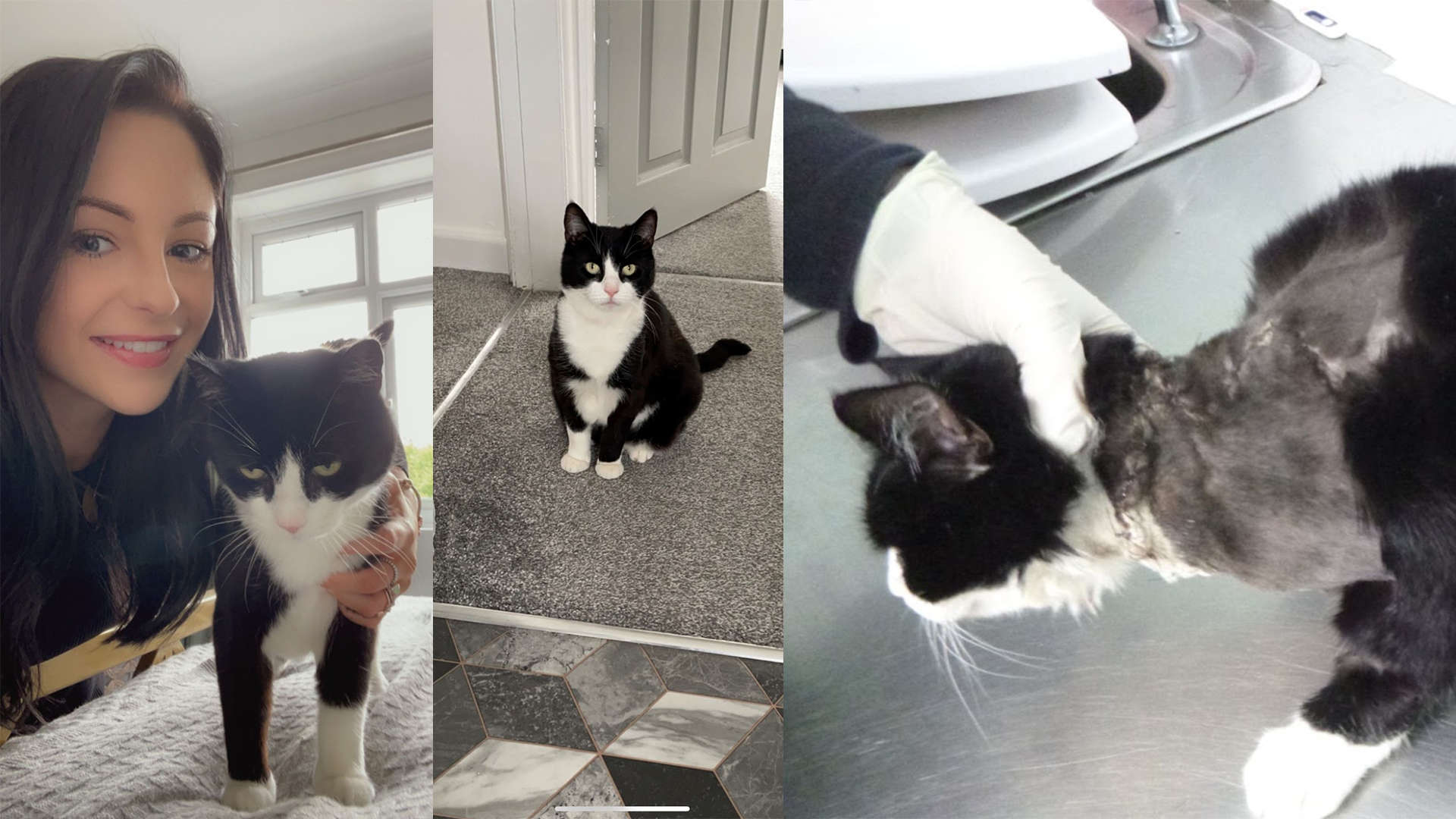 A cat which was repeatedly stabbed in a knife attack before she was rescued by the RSPCA is now enjoying life in her new home.

Katie was lucky to survive the attack in which she suffered nine stab wounds to her neck and lower body.

Police officer rescued the critically injured pet from her attacker, who was suffering from a mental health episode at the time.

Katie was losing a lot of blood and was rushed for emergency veterinary treatment at a nearby vets.

The seven-year-old cat needed multiple stitches on her wounds and some of her fur had to be shaved off to allow the vet to carry out the procedure. It was touch and go whether she would pull through - but the brave cat recuperated from her ordeal.

She was then rehabilitated in RSPCA care at the animal charity’s Oldham and Bury branch over a two-month period and apart from her scars has since gone on to make a full recovery.

Katie has now been rehomed with Jasmine Dickinson, 28, who lives in Wigan and is now almost unrecognisable from the photos taken on the day she was injured.

Jasmine said: “I had cats as pets when I was younger and was looking to adopt when I came across Katie. I applied to be her owner and the centre told me what she had been through and I was even more keen to offer her a loving home.

“She is such a sweet-natured cat and she has really latched on to me - wherever I am she is not far away.

“She loves to sit on my knee and is very affectionate and likes to be stroked - even on her neck which is still scarred but is certainly getting better.

“I work from home as an accountant and if I am on my laptop she will lay on the bed nearby very relaxed.

“Sometimes she gets nervous - especially if people come to the house who she is unfamiliar with at first she would run and hide under the bed - but she seems to be getting used to this more now.

“She seems to know my parents when they visit and is getting more trusting.

“When I first got her in March you could see some scars but her fur has grown back lovely and she has put on weight - in fact the vet said she had probably put on a  bit too much weight!

“She seems such a happy and content cat and has made a great addition to my home.”

RSPCA inspector Ryan King, who helped rescue Katie, said: “I am glad to see how well Poppy has settled in with her new owner - it is a remarkable turnaround for her.”

Sadly such cases are not unusual and in the past five years the RSPCA has received almost 100,000 reports of intentional harm. More than one million calls are also made to its cruelty hotline about animals in need with some being stabbed like in this case, beaten, drowned, burned or even shot.

The RSPCA has launched its Cancel Out Cruelty campaign which aims to reduce the number of horrifying incidents against pets by 50 per cent before 2030. The charity also hopes to raise more funds to help keep rescuers on the frontline to save animals from neglect and to help rehabilitate and rehomed them.

To donate to the Cancel Out Cruelty campaign and help the RSPCA continue to rescue animals in need, visit www.rspca.org.uk/stopcruelty.