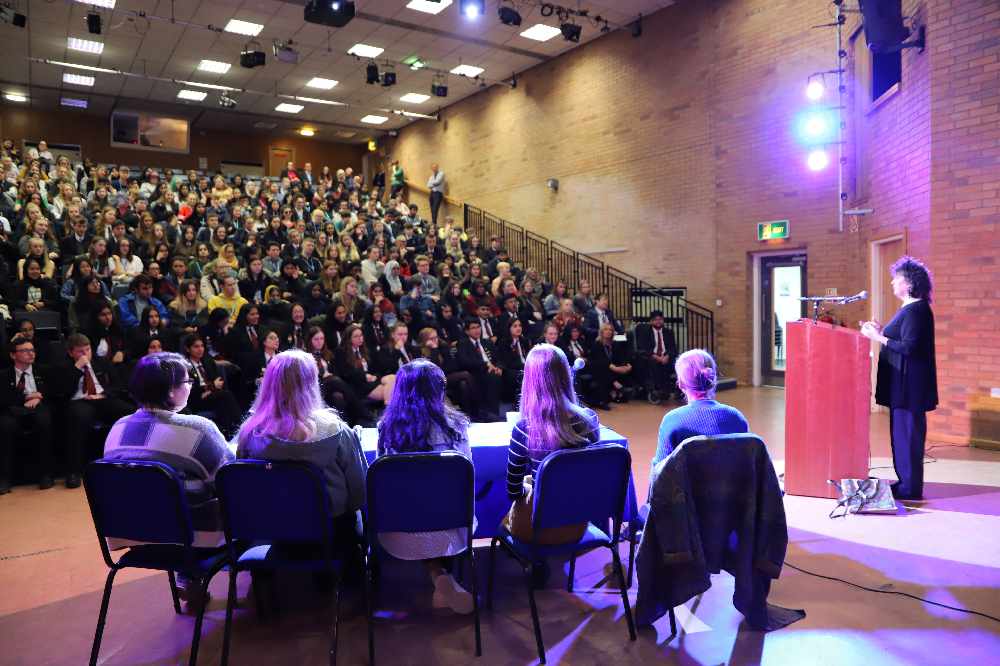 Carol Ann was introduced to the audience by A Level English student, Lucy Haddock-Williams, before reading a selection of her poems.

She read from The World’s Wife, a collection of poems subverting old stories and myths to give voice to female characters that have often been side-lined or ignored, and also from Mean Time.

Her poems are thought-provoking, and often humourous, and the students from our AS and A Level English courses listened intently and found the experience greatly inspiring.

As Year 13 English Literature student, Megan Bruton said: “I gained a bigger insight into her work through hearing it and asking her about her preference for poetry over prose.

“I particularly enjoyed her recital of ‘Mrs Faust’, where the rhythm was intense and exciting, reflecting its timeless theme of the excessive pursuit of wealth.”

“Being able to ask my questions about poems directly to the poet is a rare opportunity and has given me inspiration for future study of poetry.”

When asked if she would ever collaborate with another writer, Carol Ann described the process of writing a poem as “a solitary occupation” and she described the blank, white page as a silence.

One student sought advice as an aspiring poet. Carol Ann encouraged them to read as much poetry as possible, analyse techniques used, and reflect on elements that they like or dislike as a reader; using this to influence their own work.

Carol Ann communicated her passion for poetry throughout; “I love poetry as it speaks to me at different stages of my life.”

Students were eager to know who had influenced and inspired her. Carol Ann shared that her “presiding genius” will always be Shakespeare and her all-time favourite poem is ‘The Flea’ by John Donne.

Whilst the work of others has inspired her, she acknowledged that her work is influenced by a vast array of sources including music, history, paintings and everyday life.