£400 on the spot fine for fly-tippers introduced 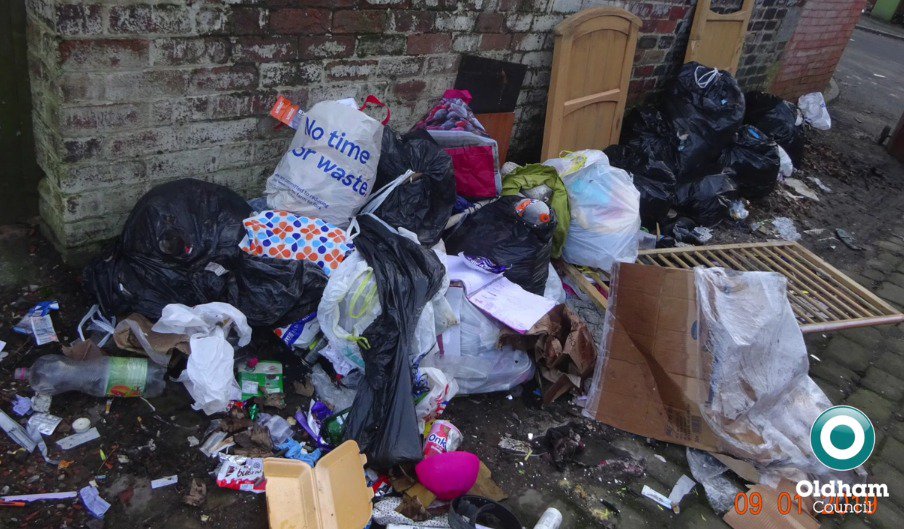 People are to face on-the-spot fines of £400 if they dump waste in Oldham.

As part of a crackdown on fly-tipping the town hall has agreed to introduce instant penalties for people who illegally abandon their rubbish, which are aimed at deterring ‘environmental crime’.

Chiefs have also decided to increase a number of fines for other offences, including graffiti, fly posting and unauthorised leafleting. It is hoped that the introduction of £400 fixed penalty notices for fly-tipping – the maximum allowed in law – will make communities ‘cleaner and safer’.

“The increased charge levels and use of a fixed penalty notice for fly-tipping and breach of the household waste duty of care will promote social responsibility, allow offenders to be dealt with equally and residents to see that offenders are being dealt with,” the cabinet report states.

Currently the council can only deal with incidents of fly-tipping by prosecuting offenders, but bosses say this involves ‘hours of officer time’ preparing files and attending court.

Most fly-tipping incidents that the department deal with are small scale dumping of household waste, which – even when the culprit is convicted – result in fines that are ‘not much more than the proposed charge for the fixed penalty notice’.

“The council can recover their costs through the prosecution process, but these are not always fully recovered due to an offender’s financial circumstances,” officers add.

In May the council prosecuted 22 people in one day, with magistrates ruling they should pay in total £18,209 in fines and costs.

In the cabinet papers of Monday night’s meeting, officers say that historically the council has set its penalty charges at ‘significantly lower’ than the maximum allowed.

“The current low value levels are believed to be a contributory factor in continuing negative behaviours, and it is believed that an increase in the values will deter individuals and organisations from such conduct,” they add.

Consequently the amount people will have to pay if they are caught dropping litter in the borough will rise from £80 to £100. And the penalty for smoking in a ‘smoke free’ designated area is being hiked from £50 to £80. A fine of £200 is also being brought in for abandoning a vehicle.

Discounts to the penalty charges are available for early payment, with the £400 fly tipping charge reduced to £280 if paid immediately.

All the money received from the penalty charges will be reinvested back into the services who had to deal with the incident, including public protection and community safety services.