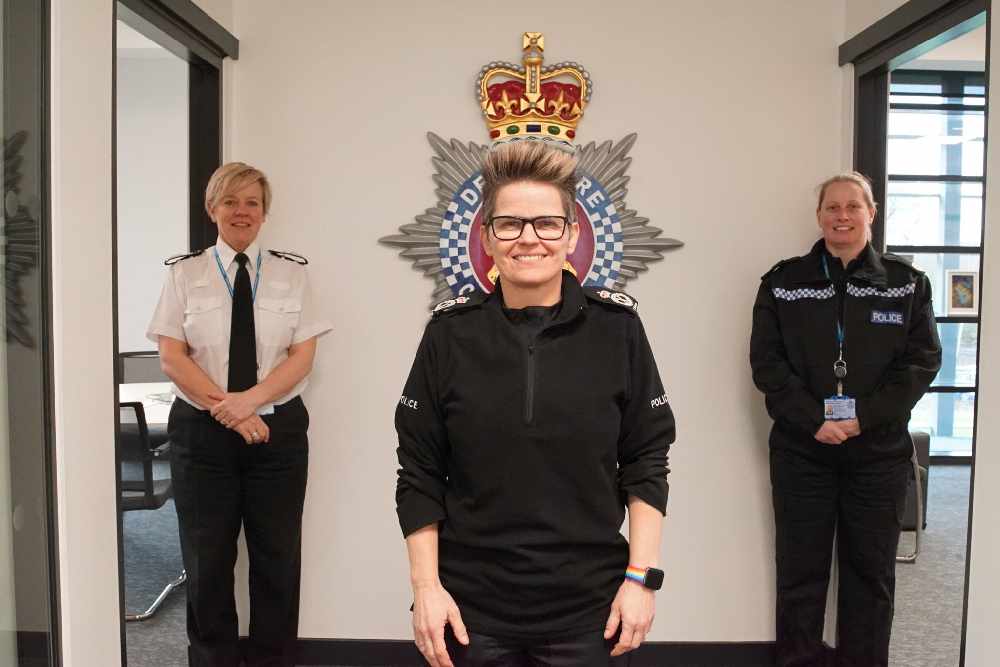 For the first time in Derbyshire Constabulary's history, there are three women in their most senior ranking positions.

With almost 80 years of combined policing experience behind them, these three women are responsible for keeping the people of Derbyshire safe.

CC Swann said: “We find ourselves a unique position, with three women in the Chief Officer team. The fact that we have a Chief who is female is something to really celebrate, but actually it’s also sad that it’s 2021 before that’s happened.

“For me, International Women’s Day is a way of highlighting inequalities that still exist based on gender, but also to celebrate some of the achievements that we’ve made. If we’re not careful we just look at the distance there is still to go, so I think it’s important to recognise the progress. We need to remember the positives as well.”

'We shouldn't put a label to things'

At the beginning of the year, CC Swann appointed Kate Meynell from Nottinghamshire Police to be her Deputy.

On joining Derbyshire’s female-led team, DCC Meynell said: “I didn’t plan to get to DCC, but I’ve always taken each opportunity in front of me. I’ve been keen throughout to try and ensure I was competent and effective at each rank before I applied for promotion.”

“I see the benefit of having three women in the chief officer positions more around the complimentary nature of our skills. When you look at our experience and what we bring to the roles, I think that’s the most important thing.”

Also joining them is ACC Shooter, who has been with Derbyshire Constabulary since 1999 and has worked her way up through the ranks, in a number of departments across the force.

She said: “Although we are three women, we are all very different. We have different skills; different personalities and I think it is that blend that enhances the leadership. We shouldn’t put a label to things. It’s how you treat people and how authentic you are. It doesn’t matter if you’re a man or a woman, it’s how you do things, how you want to deliver things, and make things better for people.”

Around 60 per cent of Derbyshire Constabulary's workforce, and between 35 and 40 per cent of their officers, are women.

Speaking about this on International Women’s Day, CC Swann said: “Equality doesn’t exist everywhere within society, and gender is one of many factors in this. I specifically say gender rather than ‘for women’, as I recognise the impact of gender is felt by both men and women. IWD for me helps highlight some of those differences and some of the challenges. When you think about gender in terms of protected characteristics, it probably feels like it is a long established or recognised one. And whilst it is, there is still actually a huge way to go in terms of equality.”

The force say the selection processes for the Deputy Chief Constable role were very robust and DCC Meynell was selected as the best candidate.

It is never about protected characteristics, CC Swann is quite firm on this, and the importance of fair and transparent processes in selection procedures.

She said: “Within the Chief Officer team I’ve got a male ACC and a male Finance Director. I spent a lot of time looking at the different skills that we all bring, and those are not second to gender. It’s the different skills and abilities that exist across the team that all work together and show how we best complement each other rather than anything based on gender.

“I do recognise that it means an awful lot to people to see senior women within an organisation, and it’s easy to forget the difference that it makes. You think to yourself, ‘I’m just being myself, doing my job,’ and you don’t realise that it does make a difference to people to see that people who maybe a little bit less traditional or less fitting perceived stereotypes, can make.

"That gives people confidence that there isn’t a glass ceiling, and that if we can do it so can they. I think that inspires all genders, however it’s maybe more of an impact on women, who as I said before aren’t represented equally in all levels or roles in the organisation.”

DCC Meynell added: “When I joined the police there was a definite lack of female role models. There were some, and they were quite supportive which really was helpful, and I hope that now, I can too be seen as a positive role model to colleagues.”

The role of women in the police has changed massively in recent years. Not long prior to some of the force's chief officers joining, there was a height restriction in place.

They talked about how in the early years of their careers, they were expected to deal with children at incidents rather than male colleagues they were working with. The Chief and DCC were given uniforms including a handbag, skirt, and a smaller truncheon than their male counterparts received.

ACC Shooter said: “As a woman you’d go double crewed, and you’d be taking the lead but the victim would often start talking to the man. You were learning your trade but because you were smaller, your male colleague would usually get the lead, leaving you feeling a bit put out.

“When I joined I never thought I’d have the confidence to become a police officer. As a child, I’d be the shy, quiet, studious one, where actually I wish I’d been a bit more outspoken sooner, even now in my policing career.

“Sometimes it’s about your own internal voice talking to yourself. You are there to do a job. When I was a police staff member, I just kept trying to push my boundaries. I became a Special, then joined the Regulars, and I just seemed to take to policing and loved learning. I didn’t think I’d have the confidence or probably the ‘voice’ I needed to be a police officer, but it turns out that was more how I perceived a police officer to be.”

'Joining the police was a massive shock to me'

Throughout their careers, the force's leadership team have faced a number of testing situations. By challenging opinions and pushing boundaries, they have worked their way to the top and are leading initiatives to keep people that live, work and visit Derbyshire, safe.

CC Swann said: “Joining the police was a massive shock to me. I grew up in Cornwall and went to university, and that’s all quite protected. I hadn’t really been exposed to the wider things of life and actually the depravation that you see in some properties can be dreadful and upsetting, and in comparison, I’d had a very cocooned and protected upbringing.

"It was a real education and eye opener to me what the reality of life is to some families, and I’m actually always struck with how people can find themselves in different circumstances to you, simply by fate or lack of opportunity.

“I’m always really keen that we demonstrate respect to everyone, because people often don’t choose to end up in the situation that they are or have. It might be very different to how you live your life, what you face, but we shouldn’t judge them. We should absolutely treat people with respect and, where we can, with kindness. We do have a duty to fight crime and proactively bring people to justice, but also to protect vulnerable people from harm. That’s our job and we must do it without fear, favour or prejudice.”

This outlook on working is felt across the force. From dealing with vulnerable people in communities to arresting criminals, Derbyshire police say one of its priorities is to 'do the right thing and make a difference'.

They add that officers and staff 'always aspire to work in this way and have great role models to be able to work like this'.

ACC Shooter said: “I like to root for the underdog, where you’ve got a hard-working person, who perhaps isn’t the finished article, but just needs a chance. I know younger in my service, many senior officers at that time might have seen me as very quiet, so I know being probably seen as someone really insignificant and thought people wouldn’t even remember who I was.

"I really root for people that work hard and let people have equal share of the space, the equal voice, let people express themselves and understand how they operate in terms of their personality style and what they can offer.”

'You do have to fit in to a certain extent, but that doesn't mean that you acquiesce to things'

Looking back on their careers, ACC Shooter and DCC Meynell say they have always tried to grab opportunities with both hands, and can now proudly reflect on how they got to where they are.

ACC Shooter said: “What I’m proud of is that I never thought I’d get to here. I literally thought I had a career for life when I became a police staff member in Criminal Justice all those years ago, so to actually get to where I have and look back on the hours, the work and the commitment I put in, that makes me quite proud really. I know that my family are proud of me, and that’s all that matters.

“My biggest piece of advice to my younger self if I knew then what I knew now, I’d have been my true self sooner. Be true to yourself and don’t worry about having an opinion, because your opinion matters. It’s how you articulate it where sometimes it can’t be heard, but have an opinion because I think that’s what I hid away from having for a long time.”

DCC Meynell added: “I think when you join an organisation, part of you wants to fit in. You do have to fit in to a certain extent, but that doesn’t mean that you acquiesce to things. I would challenge stuff when it was said, I remember challenging an Inspector once about something, and once I’d challenged him he understood what I was saying and my perspective. You’ve just got to find your way, find your feet and try to understand why things happen.”

On International Women’s Day this year, the force wanted to recognise the successes that its Chief, Deputy, and Assistant Constables lead teams to achieve on a daily basis.

They added that the responsibility of leadership and keeping an entire county safe is by no means an easy task, but they show what can be achieved when working together, supporting staff and encouraging both challenge and change in an organisation.

CC Swann concluded: “Obviously becoming Chief was a really proud thing for me, but I think more than it being a ‘Yes I’ve made it!’ thing, it’s more the enormity of it. I think I have a great responsibility to the people who work here, to provide the best service I can to the public, and to keep the people of Derbyshire as safe as I can. When I was told I’d got the job I didn’t go into it celebrating, it was more actually, almost immediately I felt the enormity of it and thought ‘I really need to do the best job I can and absolutely must do that.’”