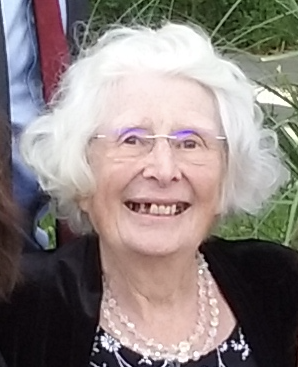 Much-loved and well-respected Glossop resident Ruth Fennell has passed away at Whitfield House after a short illness.

Ruth (pictured), 93, came from a farming family and spend her early years in Shropshire but, as the first member of her family to undertake higher education, she moved to the ‘industrial north’ to study for a degree in French at the University of Manchester – and it was here that she also met her husband, Alan.

Married for 60 years, they lived in Simmondley for all their married life.

Ruth taught French for a number of years at Glossop School where she helped organise exchange visits to France, and also, as a beekeeper herself, at one stage also ran an after-school beekeeping club – and on a number of occasions she was called away from school by the local council to capture swarms of bees from local properties!

She was also noted for her enthusiasm for recycling.

Ruth was a keen gardener and also volunteered over the years at the Citizens Advice Bureau, Victim Support and Meals on Wheels. She was a stalwart supporter of the Women’s Institute and was a member of Charlesworth WI for over 65 years.

During her time with Charlesworth WI (and with Simmondley WI) she held most of the committee positions at various times and served at county level as a Voluntary County Organiser.

She set up and contributed to the WI market stall held in Glossop for over 10 years and was part of a delegation which went to Romania to advise on the setting up of a similar system.

Her altruism and interest in supporting people meant she remained in contact with people from across the world.

One of the highlights of her life was her trip to Buckingham Palace with Alan when he received his MBE for his contribution to swimming. Ruth continued to support Glossop Swimming Club after Alan’s death in 2013.