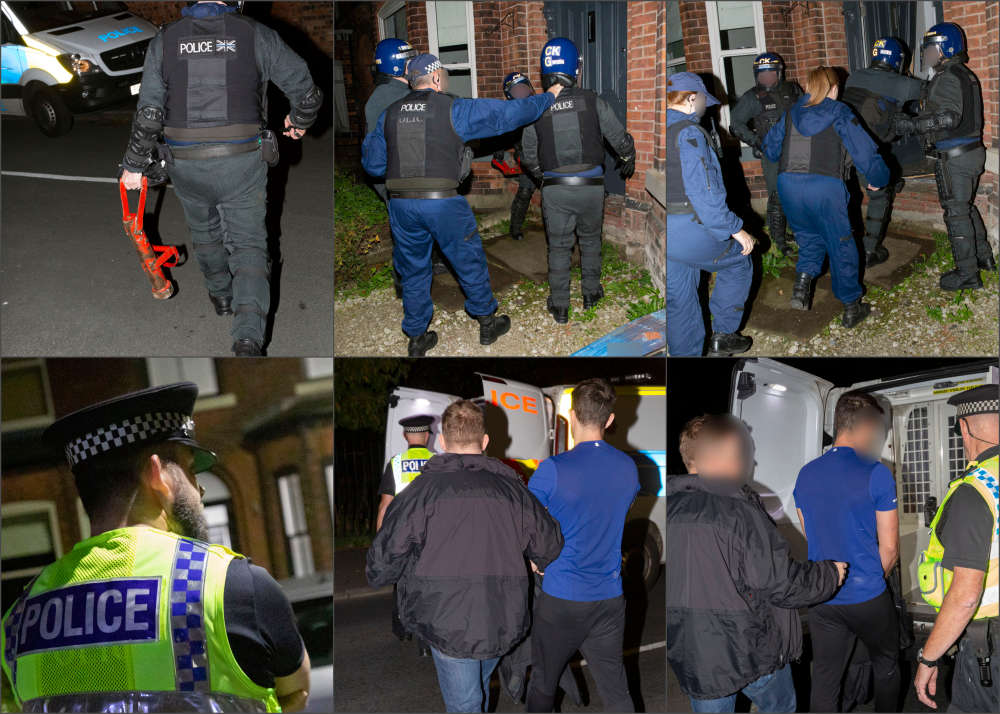 A previous raid made as part of Operation Venetic in north Manchester last month.

Police have carried out dawn raids at addresses in Hyde and Glossop as part of an investigation into the use of an encrypted network by serious and organised crime groups.

Operation Venetic - a nationwide crackdown led by the National Crime Agency (NCA) into the communications platform EncroChat - is the UK's biggest ever law enforcement operation.

On Tuesday morning (16 November), another kilo of drugs were seized and four people were arrested by investigators probing the suspected supply of class A drugs and firearms in the North West region.

Two 31-year-old men and a 44-year-old man were arrested on suspicion of conspiracy to supply class A and B drugs, and money laundering.

The 31-year-old suspects are also being held on suspicion of possession of firearms and ammunition.

The 44-year-old is additionally being questioned about conspiracy to possess firearms.

A 25-year-old woman was later arrested on suspicion of possession with intent to supply class B.

Search specialists at one of the addresses in Glossop recovered what is believed to be a kilo of amphetamine, which has been taken away for forensic examination.

The action comes as part of a wide-ranging investigation - codenamed Butmir - which had already uncovered information suggesting a total of almost 40 kilos of cocaine was in the possession of an organised crime group.

In Greater Manchester, Operation Venetic has seen dozens of detectives across the force's Serious and Organised Crime Group (SOCG) and each of the 10 districts lead numerous investigations into hundreds of high-level suspects.

So far, over £2.5million in cash has been seized, as well as nearly a dozen firearms, over 1,100 rounds of ammunition, over 12 kilos of class A and 25 kilos of class B drugs, and over £300k of assets including luxury jewellery and vehicles.

Following the latest arrests, GMP say a total of 201 people have now been detained since the launch of Operation Venetic by the NCA in July 2020, and 155 of those have subsequently been charged for a range of drug, firearms and money laundering offences.

Detective Inspector Simon Akker, Senior Investigating Officer for Tuesday's action, said: "We've been working tirelessly ahead of today's action and we've been able to arrest three men we were targeting today with the support of partners from Lancashire and Derbyshire constabularies.

"Searches are on-going at the four addresses we've attended and our enquiries there will continue for as long as necessary; we've already recovered what we believe to be a kilo of amphetamine from one of the properties.

"Today shows our continued commitment to tackling organised crime and working with law enforcement agencies across the country to ensure we are able to take the action we need to in order to progress our wide-ranging and complex enquiries into investigations like this."

Detective Superintendent Neil Blackwood, head of SOCG, said: "This morning's arrests bring about a significant milestone for us at GMP, as the 200th arrest as part of our Operation Venetic response is indicative of the exhaustive work by hundreds of people across the force during the past 18 months.

"The takedown of EncroChat has provided law enforcement agencies across the UK - and beyond - with a unique opportunity to investigate high-level serious and organised criminality, and ensure suspects are taken into custody to be questioned about what we have found on this encrypted network.

"It's fair to say the numbers have been staggering and there is no doubt lives have been saved as a result of the action undertaken by ourselves and policing partners across the UK, in partnership with the NCA.

"We've taken away millions of pounds in cash, huge quantities of drugs, firearms and assets, and our relentless task does not stop here; we have over 150 people waiting to be tried in court and we are determined to continue ridding Greater Manchester's streets of those we suspect are involved in the criminal fraternity."