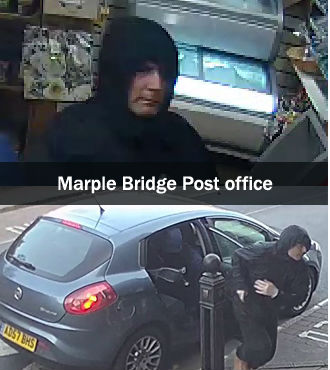 Police have released CCTV images in connection with a robbery at a post office in Marple Bridge.

It took place on Town Street on Friday 20 September.

At around 8.20pm, three men carrying iron bars threatened a member of staff and jumped over the counter before stealing the till and its contents.

No one was injured during the robbery, but police say they were left understandably shaken.

The offenders, described as three white men in their 30s, fled in a light blue Fiat Brava.