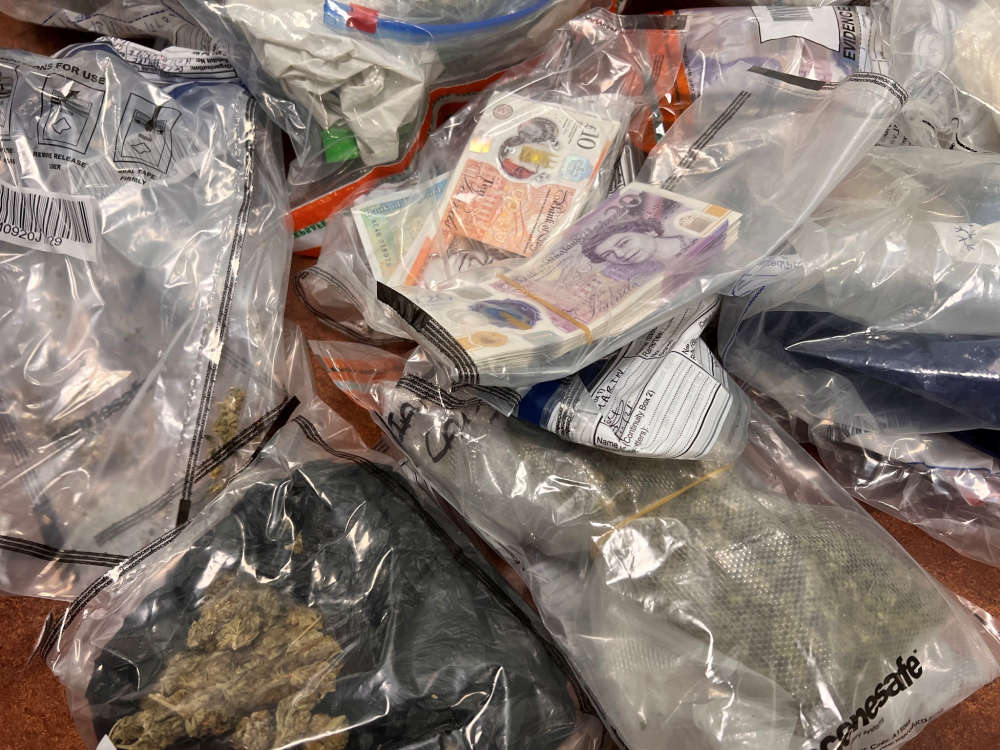 Some of the drugs and cash that officers seized. Image: Derbyshire Constabulary.

Nearly £400,000 in cash and drugs have been seized by police investigating organised crime in north Derbyshire in the past year.

Thirty-two have been charged or convicted at court - with 12 people jailed for 55 years.

Detective Inspector Lyndsey Curtis, who leads the team, said: “In the past 12 months the team of officers have worked incredibly hard to protect north Derbyshire from organised gangs.

“These criminals make their money at the expense of the health and happiness of our communities through the drugs they peddle and the serious violence they use.

“The drugs seized, including heroin, crack cocaine and amphetamine, were destined for sale on the streets of towns like Chesterfield, Buxton and Matlock – fuelling further crime in those areas as users scramble to feed their addictions.

“Over the course of the year 48 warrants were carried out by the team and saw two imitation firearms discovered – along with numerous knives and other weapons – and 15 cars seized or confiscated.”

Detective Sergeant Simon Cartwright said: “In all our investigations there are vulnerable people who are exploited by criminals and coerced, often through the threat of serious violence, to sell drugs and commit other crimes.

“It is also well known that County Lines gangs, as well as other criminal groups, will use children to traffic and sell their drugs – and the team has made a dozen safeguarding referrals for children involved in, or are in close contact with, criminality.

“We have also helped six victims of modern slavery who have been referred to a national mechanism that will help remove them from the terrible circumstances that they have found themselves in.

“None of this would have been possible, however, without the support of our communities. The force is extremely grateful to every person who has passed on vital intelligence to us during the past year.

“Your help is absolutely essential to help ensure that our team has the very latest information about how criminals are operating and I would urge anyone who believes they can make where they live safer to report their concerns to us.”

Anyone who suspects that organised criminals may be operating in their area can contact the force, in confidence, at any time using any of the below methods:

You can also anonymously contact the independent charity Crimestoppers, on 0800 555 111, or by visiting www.crimestoppers-uk.org