Every night, as regular as clockwork, a steam train hauling up to 25 wagons would pull into Glossop station.

But only a handful of people who secretly called it the ‘Radar Special’ knew what the trucks were carrying.

It was the early days of the Second World War and the Admiralty had chosen Glossop, half hidden in the Pennine hills, to house its most dangerous ‘weapon’.

The 7.55pm trains that ran from 1941 to 1943 were delivering vital equipment to the Royal Navy’s main nationwide radar depot.

It was a well guarded secret. Radar would shorten how long the war lasted and helped Britain and her allies to win it.

Had the enemy known, it was likely that Glossop would have been a strategic bombing target.

The sensitive equipment that  was delivered - sometimes in passenger trains with their windows blacked out - was sent to Glossop for storage and testing.

In the summer of 1946 the Chronicle reported: “Few inhabitants of Glossop with a population of 20,000 had guessed  that over-night the town had been transformed into a number one target for enemy aircraft.

“But the secret was well kept as Howardtown Mill and premises in Derby Street, Wood Street, Surrey Street and George Street were filled with radio sets, valves and components, which came for testing and redistribution.” 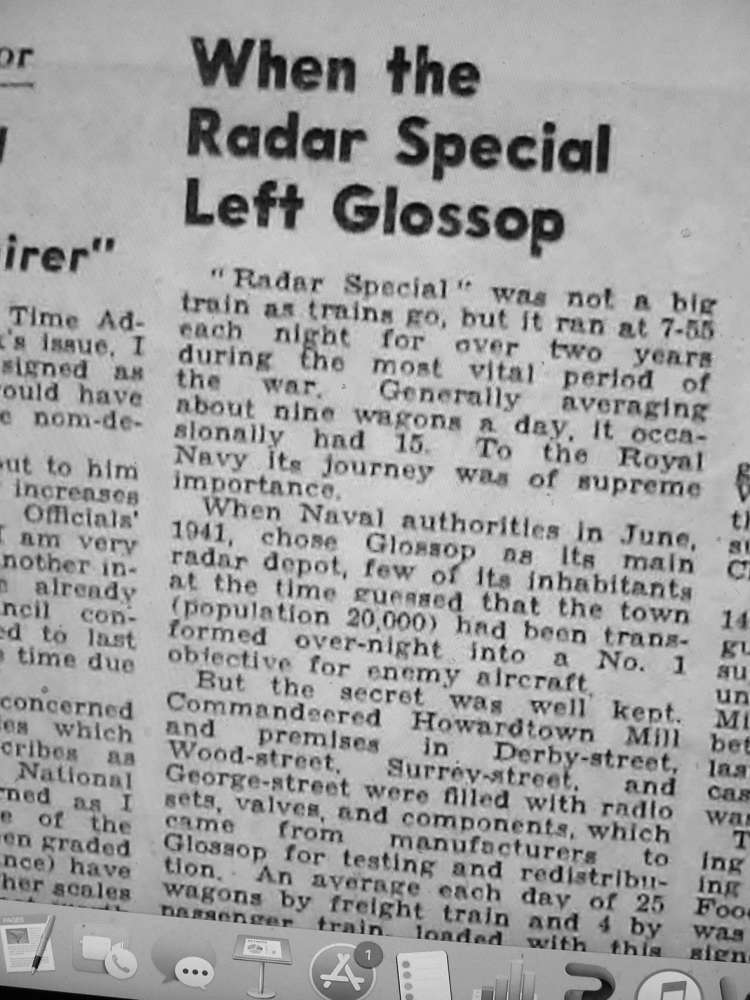 BIG REVEAL: The news of yesteryear.

The scale of the operation was staggering.

The report continued: “Between 1943 and 1944 an average of 25 wagons by freight train and four by passenger trains a day loaded with this delicate equipment were run by LNER (London and North Eastern Railway) company into Glossop.”

Tried and tested, the equipment then left Glossop station by passenger train to Piccadilly station, then called London Road, in Manchester.

There it was sorted and sent on to almost every port and inland radar post in the British Isles.

Supervising the distribution of what were described as between three and three and a half million ‘packages’ from Glossop’s Norfolk Street station was ‘station master Godfrey’ and his staff of 12.

The war ended in 1945, but it was around a year later before most Glossop people realised what the mysterious trains that had suddenly arrived and just as quickly left, really carried.