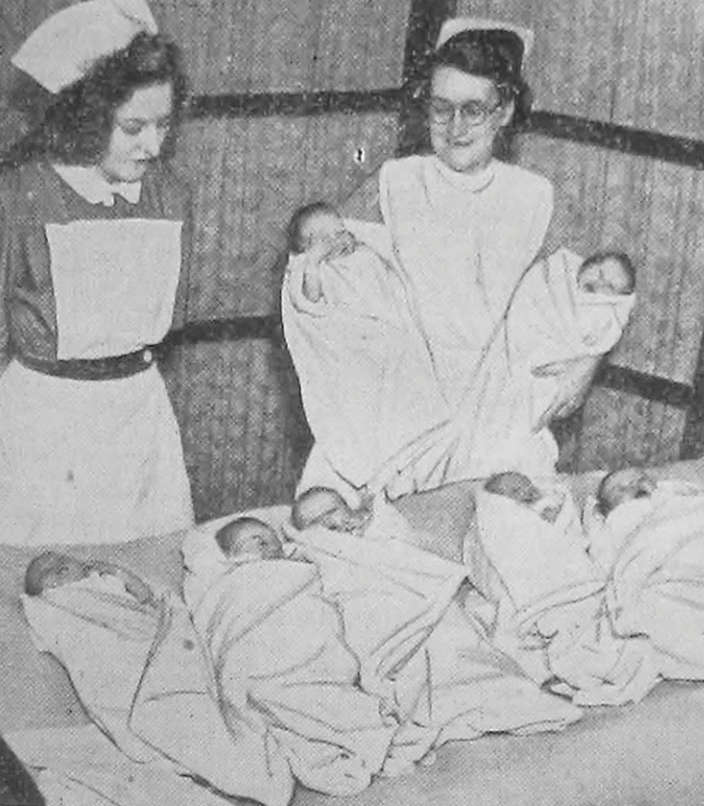 QUITE A HANDFUL: Two members of the nursing staff at Glossop's Partington Maternity Home with the seven babies who were born there during Easter 1947.

A record number of Easter babies for Glossop were born at the town's Partington Maternity Home in 1947.

It means that some of four girls and three boys who came bouncing into the world have been celebrating their 75th birthdays recently.

First of the super seven to arrive was Irene Hill, the daughter of Mr and Mrs Hill of Newshaw Lane in Hadfield, who arrived at 3.45am on Easter Sunday.

At 10.30 the same morning, Judith Ramadan was born to Mr and Mrs Ramsden, of Church Street in Old Glossop.

The birth signalled an end to the day's deliveries for the hard-working staff at the North Road hospital.

But it was all systems go on Easter Monday, with the birth rate reaching five - including a set of twins.

The first arrival and the first boy to be born over Easter came at 7am - Philip to Mr and Mrs Bradley of Sheffield Road in Glossop.

One hour later and it was the turn of the first of the set of twins - Mary Leach, whose parents lived at Cowbrook Cottage, also of Sheffield Road.

At 11.45am, another baby girl, Sheila Renshaw, whose parents lived at Whitfield Cross in Glossop, was born.

The last of the magnificent seven, James, came crying into the ward and the world at 1.20pm. He was the son of Mr and Mrs Hunt, of Station Road in Hadfield.

It was an Easter baby boom record for the hospital, now turned into homes, but the team behind the deliveries were probably too tired to celebrate.

If there are any of the Easter babies out there, let us know if you can recognise yourselves from the little bundles of joy in the photograph above. Email david.jones@questmedianetwork.co.uk