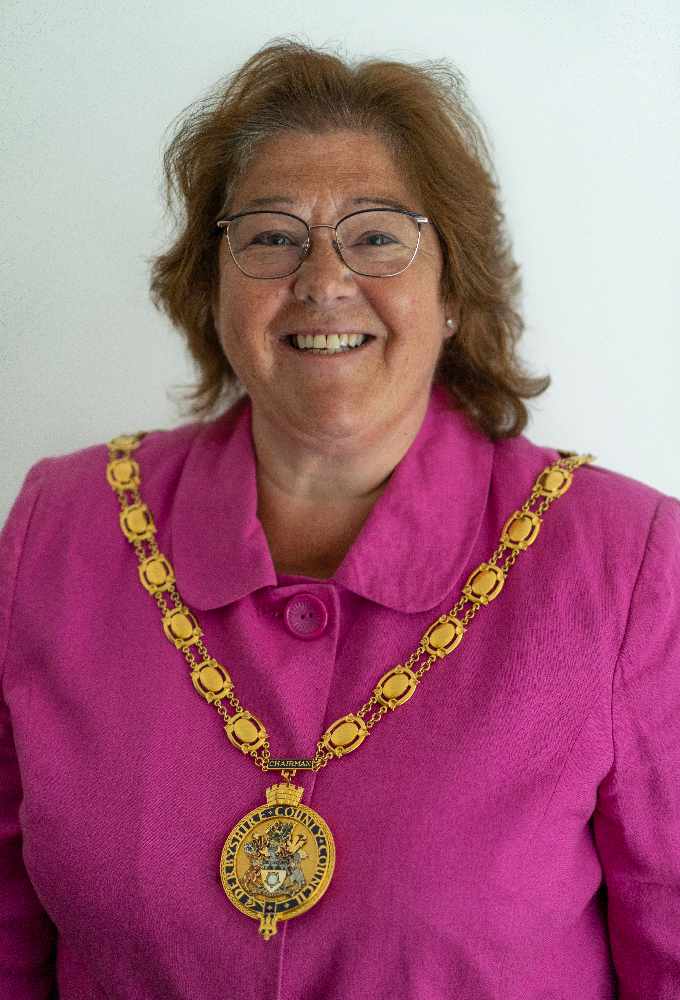 Derbyshire County Council's new Civic Chairman is looking forward to the year ahead and intends to fly the flag for Derbyshire and proudly promote all that the county has to offer over the next 12 months.

Councillor Jean Wharmby accepted her new role at the county council’s AGM and was presented with her official chain of office by her husband, former county councillor George Wharmby, who has been Council Chairman twice himself.

The Civic Chairman’s role is to act as an ambassador for Derbyshire and to be a link between the county council and local community bodies. Councillor Wharmby will be supported by Civic Vice Chairman Councillor David Wilson.

Councillor Wharmby has been involved in local issues for many years, having been elected on to High Peak Borough Council in 2005.

In 2009 she decided to stand for election to Derbyshire County Council and was successful, representing the Glossop and Charlesworth division until 2013.

In 2017, she was again elected as a county councillor to represent the same division and became the county council’s Cabinet Member for Adult Social Care and Health.

Swapping her Cabinet Member role for that of Civic Chairman, Councillor Wharmby, who has two sons and two grandsons, has had plenty of practice when it comes to holding such an office.

Councillor Wharmby said: “It is a real honour and a privilege to have been elected as the Civic Chairman and continue to represent the residents of Derbyshire, and to take over the reins from Councillor Judith Twigg who has done such an excellent job during a very difficult year.

“I have got a lot of plans and am hoping that I will be able to get out and about a lot more and meet people face-to-face in my role, as things begin to open up.

“I am confident that I bring experience and dedication to the role, and I will certainly bring enthusiasm as well as empathy.

“I love Derbyshire and I’m grateful to live in such a beautiful county. We have so much to offer and I will be flying the flag for the business opportunities there are, tourist attractions and rich culture and ensuring people know about it all.

“I’m looking forward to being able to support our fantastic voluntary sector and charitable organisations, and to hearing the stories people will have about the dedication and spirit they have shown during the pandemic.”

As a supporter of the Royal British Legion and an active volunteer for the annual Poppy Appeal, Councillor Wharmby is supporting the county council’s flying of the Armed Forces Day flag on Armed Forces Day on Saturday 26 June.

Councillor Wharmby added: “Armed Forces Day is a chance to show our support for the Armed Forces community, from veterans to serving troops, their families and new cadets starting their careers. I am very much behind this and glad to be a part of the county council’s support shown towards the Armed Forces.”